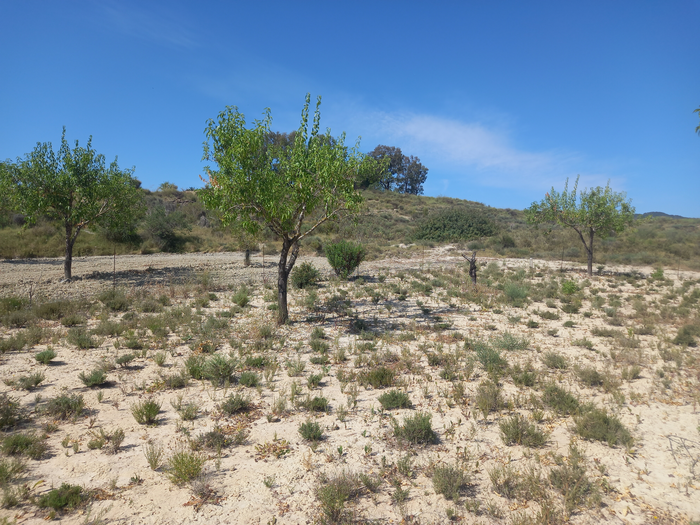 Thyme among almond trees: it mitigates climate change and increases the land’s production

The introduction of perennial crops in the alleys of Mediterranean dryland almond orchards reduces greenhouse gas emissions and increases soil carbon sequestration, according to the latest study within the Diverfarming project.

Agriculture has become a source of greenhouse gas emissions due to the intensification of farming and the high use of inputs, however, it has great potential to be a carbon sink. In fact, agricultural soils present a unique opportunity for carbon sequestration and for compensating emissions if managed adequately.

In the search for that management that helps to combat climate change and maintains (and even increases) the land’s productivity, the Diverfarming project has focused on the introduction of two perennial crops (thyme and caper) among the alleys of a dryland almond orchard in Murcia, with reduced tillage.

A team comprising researchers from the Universidad Politécnica de Cartagena (UPCT) together with the CEBAS – CSIC has evaluated the short-term effect of this intercropping compared to monocropping with tillage, regarding soil CO2 emissions and its organic carbon content. They measured the carbon dioxide and nitrogen oxide emissions for two years. The carbon dioxide emissions decreased in the intercropping systems, with regard to the practice of no-tillage in comparison to the monocropping (moreover, it was shown that the peaks in the emissions occurred after tillage on hot days, so it is recommended to avoid tilling on hot days).

Considering that these crops introduced in rows between the main crop can be subsequently commercialised then the increase in economic productivity of the land is also an important factor when choosing this type of intercropping systems. In fact, in the case of thyme, up to seven litres of essential oil were obtained per hectare and without any negative effects on the almond production.

The combination of crops adapted to the soil and climate conditions to introduce in rows in the alleys of the main crop and the use of sustainable management strategies arise as effective action to obtain increases in soil organic matter in the short term, avoiding soil losses, and reducing greenhouse gas emissions. These techniques would be in line with the strategy of the European Green Deal and European climate legislation that moves toward climate neutrality in agricultural activity in 2050.

Read the paper: Science of the total environment