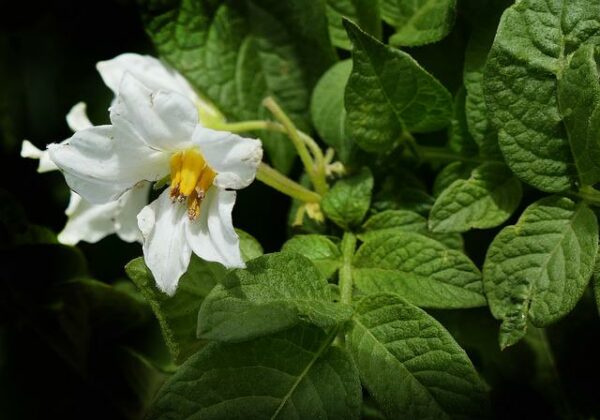 Author: Jamin Ali is a final year PhD Student based at Keele University, UK. You may follow him in Twitter as @JAMIN_ALI_ALI.

Recent research opens up the prospect of breeding for aphid resistance by crossing cultivated and wild potatoes.

Current agricultural crops have been selected over a long domestication which has drastically reduced the genetic diversity in crop plants compared to their wild ancestors. In fact, along this process of crop domestication, plant resistance to herbivorous insects may been reduced. Although a recent meta-analysis has shown that domestication had no consistent overall effect on the specific plant defence traits underlying resistance, such as secondary metabolites, there is still an opportunity to source resistance traits from crop wild relatives (Whitehead, Turcotte and Poveda, 2017). Evidence is available from some examples that show that domesticated plants possess weakened chemical defences compared to their wild ancestor.

In our recent study (Ali, J et al, 2022), we had the aim to identify the insect resistance level of wild potato (Solanum stoloniferum Schltdl.) accessions compared to cultivated potato (S. tuberosum). Our hypothesis was that wild potato accessions respond better to aphid herbivory than commercial potato cultivars. To test this hypothesis, we performed growth assays using peach potato aphids, Myzus persicae (Sulzer), as a model herbivore, observing their reproduction and survival on wild and cultivated potato. M. persicae is one of the most deleterious polyphagous aphids that can damage plants directly through feeding and honeydew deposits, or indirectly by transmitting plant viruses. In addition to aphid performance and survival studies, the behavioural response of M. persicae and its common endoparasitoid (Diaeretiella rapae (M’Intosh) was investigated in an olfactometer bioassay. To correlate insect behavioural response with the emitted volatile organic compound (VOC) profiles, volatile entrainment was conducted and the collected VOCs from wild and cultivated potatoes were analyzed and compared.

Our results show that there are promising sources of direct aphid resistance in the tested wild potato accessions. The very low aphid survival observed suggests that toxic phytochemicals were present in the wild S. stoloniferum accessions tested. Although the potential of crop wild relatives as sources of novel resistance to insect pests has been extensively studied, exploiting potential resistance traits that are available in wild potato ancestors against insects is understudied. This is attributed to difficulties in identifying the key secondary metabolites that determine resistance and the genes encoding their production. Thus, identification of the bioactive compounds and genes encoding resistance will be an important area for future studies.

To retain the marketable yield and quality required, it will be also important to test if bioactive compounds are harmful to humans or if they affect the taste of the potatoes. Morphological differences could be seen between the Solanum species which were used in experiments; wild accessions had smaller leaves compared to commercial ones. Although there could be some relation between aphids and leaf size it is unlikely to explain the high mortality observed which is more likely due the presence of toxic phytochemicals.