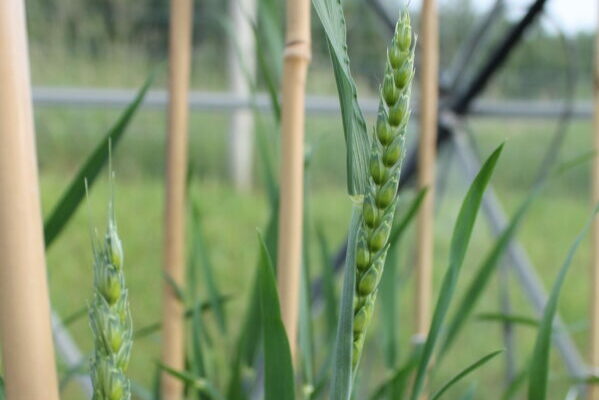 Science (Fact) Fiction – a tale of ozone, nitrogen and wheat

Author: Clare Brewster is a PhD postgraduate researcher based at UKCEH Bangor researching the effects of ozone on the nitrogen dynamics of wheat. cbrewster@ceh.ac.uk

Ozone sat in his favourite armchair puffing on his old clay pipe and blew three ‘O’ rings gently up and out of the open window. He had had a long hard day and was reflecting, somewhat smugly, on just how much damage he had caused, for Ground level Ozone, unlike his good twin brother Stratospheric Ozone, was a trouble maker.

It had been a beautiful sunny day, with sunlight reacting with all the lovely air pollution to generate much higher levels of Ozone than normal, across wide areas of prime farmland. And with the rain the night before as well (so all the crops were gleefully inhaling as much carbon dioxide as they could so they could photosynthesise like crazy) he just snuck quietly in alongside and, hey presto, he was inside every plant he could find: through the leaf stomata, past the guard cells (hah!) and into the leaf. Just where he wanted to be. Perfect.

Some of the reactions that followed did give him a bit of a headache, but it was the party with all the resulting Reactive Oxygen Species (or the Rozzers as he affectionately called them) that he looked forward to the most. They were a bit of a wrecking crew admittedly, especially when you had too many in a cell at one go. They damaged the cell walls, and sent half the genes and signal crew scurrying for cover so that the photosynthesis machinery stopped working properly. Some plants did quite a good job of repelling borders with antioxidants being hurled at the Rozzers, but others just took umbrage. ‘Too sensitive some of them’, thought Ozone. Take wheat for example, especially the new cultivars. High yielding prima donnas they are! A little bit of extra Ozone and they can’t cope. He paused and did a quick mental count. He reckoned 7-10% of global wheat yields were reduced by Ozone every year now. Sweet. He sighed, contentedly.

Except something rankled with Ozone. Nobody seemed to have noticed how much damage he caused – at least not many. He had his fan club of course – a smattering of fancy plant science researchers who thought they had his measure – but he was a top-flight abiotic stress! He should be known the world over! But no. Drought! Heat! Flooding! They all got headlines in the news! Climate change was stealing all the limelight these days. It just wasn’t fair. OK so he was invisible – that was a bit of a disadvantage. He sometimes left tell-tale speckles on the leaves – some of his best work in his opinion – but no-one noticed those either. Farmers did notice when their wheat yields went down though. Hah! Oh yes. All his work. But then others got the credit! Something had to be done. Maybe he could talk to Nitrogen, he was good at drawing attention to himself, increasingly so. They already worked together a lot, so maybe Ozone could get himself noticed that way? Then it dawned on him. It was an impact he hadn’t really thought about. It was the damage he did to the plant and its grain that meant more of the farmer’s Nitrogen fertiliser was left in the soil to leach nitrates or maybe even emit nitrous oxide and cause all kinds of problems. Big problems. And Nitrogen got all the credit. What could he do? He needed evidence. No-one would believe him if he just started making wild claims. Nitrogen would just laugh at him.

Ozone realised he needed to quantify what effect he had on Nitrogen. He’d never thought of it that way before, but the more he thought about it the more ways he could see that he did, both inside and outside the plant. So, he reached for a pencil and paper, took another puff on his pipe, and started to make a list…

Ozone affects the quantity of Nitrogen…

A version of this story was first published in The Niche, British Ecological Society, Summer 2021, https://www.britishecologicalsociety.org/membership-community/the-niche/

Animated version funded by, and available through, the Envision Doctoral Training Programme http://www.envision-dtp.org/2021/ozone-and-its-effect-on-the-nitrogen-dynamics-of-wheat/