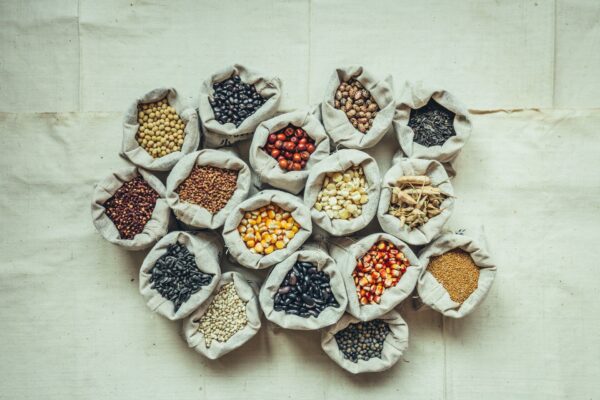 Despite being relatively new in China, community-led seedbanks are a valuable resource in conserving agricultural biodiversity. For the first time, researchers have provided a comprehensive summary of the services performed by 27 seedbanks across the country.

“Plant a hundred kinds of crops”

Wangjinzhuang village is nestled amongst the steep slopes of the South Taihang Mountains in Hebei Province, China. To prosper in the northern climate, the villagers have developed a tried-and-true strategy: “using the land to plant a hundred kinds of crops and not rely on the sky”. Their fields contain red millet, white sorghum, purple and green eyebrow beans, and yellow radishes. Having survived for over a thousand years, this agrobiodiversity is a vibrant cornerstone of the village’s agricultural heritage that is too precious to lose.

In an effort to combat dwindling crop diversity across China (the Ministry of Agriculture found that of 11,590 grain crop varieties planted in the country in 1956, only 3,271 varieties remained in 2014), the government has bolstered its system of national genebanks, plus issued recent policy recommendations. These are making positive steps towards large-scale conservation; however, there has been relatively little attention given to the role of the country’s 260 million farmers who have saved, used, and contributed to the evolution of diverse, local crops for centuries.

The services provided by China’s community seedbanks have been documented, for possibly the first time, by an article recently published in Frontiers in Sustainable Food Systems. 27 seedbanks were surveyed to understand their ability to meet a wide range of needs, with positive implications for climate resilience, improved farmer livelihoods, and increased food security.

The seedbank at Wangjinzhuang village, one of the case studies covered by the article, has quickly grown since its establishment in 2019 by a local farmers’ association. Now run by 43 members, 26 of whom are women, the seedbank holds viable samples over a hundred crop varieties, including essential grains such as millets and 82 traditional varieties. Members have organized multiplication plots and stipulate that for 1 kg of seeds withdrawn, 1.5 kg must be returned. This, combined with the guidance of plant breeders and a farmer field school, ensures a future supply of seeds that continue to evolve to meet local environmental conditions.

Elsewhere, in Jiangsu Province (a region with 6,000 years of rice paddy culture), economic development and large-scale agriculture have depleted many aquatic crops. But, spurred by increased consumer demand for sustainable and healthy foods, farmers have begun to turn back towards more diverse traditional rice varieties such as Suyunuo, an aromatic sticky rice that had been abandoned for over two decades. This ‘lost’ crop diversity is being reintroduced at an organic farm backed up by community seed banking. The community seedbank facilitates farmer-to-farmer exchange of seed and brings new diversity to the area through samples obtained from a regional public genebank. However, farmers realized that they no longer knew how to cultivate Suyunuo for the best results. Only by collaborating with public research institutes is it possible for farmers to re-adapt the crop to match new environmental conditions and consumers’ interests.

Article author Dr. Yiching Song from the Chinese Academy of Sciences spearheaded the Farmer Seeds Network, a national initiative that organized many seedbanks.

“Community seedbanks encourage seed and knowledge exchange within and among rural communities, between rural communities and the formal conservation and seed sectors; and add value to local crop diversity through new linkages with markets and cities.”

Growing seedbanks across China and beyond

Researchers emphasize the need for policies to recognize the complementary role of community seedbanks within the national conservation system and standardize processes for seed storage and benefit-sharing. Dr. Song notes that a formal system of incentives and rewards would, “encourage farmer communities to establish community seedbanks and work together with plant breeders and other researchers to take care of our country’s rich agrobiodiversity.”

Further support to develop seedbanks can come through organized training. Ronnie Vernooy is a scientist at the Alliance of Bioversity International and CIAT, which was part of the establishment of China’s first-ever community seedbank in 2010. Since then, he says, “The Farmer Seeds Network, using our training handbooks developed for facilitators and farmers, has done remarkable work enabling farmers to open new community seedbanks across China. This is an important and exciting step in building more resilient seed systems.”

The community seedbank handbooks developed by the Alliance of Bioversity International and CIAT were revised in 2020, and have been translated into multiple languages to help establish seedbanks in the Horn of Africa. See below for different versions: