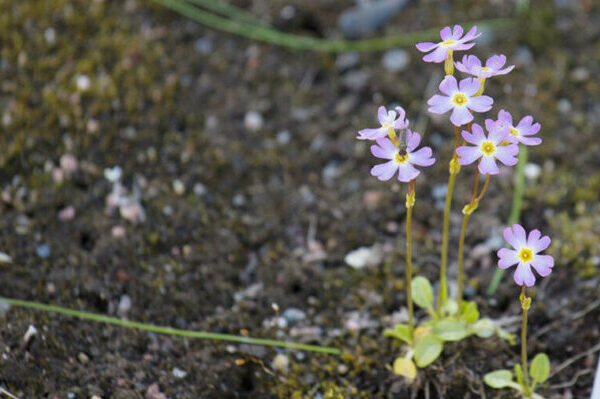 Siberian primrose, a species protected under the Habitats Directive of the European Union, spread northward from southern areas to the current Bothnian Bay as well as, through another route, to northern Norway with the gradually receding ice after the Ice Age. Compared to today, the warming of the climate was very slow at the time.

“Siberian primrose is specialised in growing on seashore meadows with low vegetation, which in Finland are formed by the post-glacial isostatic rebound.  The species benefits from the lack of strong competitors and grazing that keeps the vegetation low,” says Marko Hyvärinen, director of the Botany Unit of the Finnish Museum of Natural History, University of Helsinki.

In 2013, researchers at the Universities of Helsinki and Oulu planted both the Norwegian and Finnish varieties (Primula nutans ssubp. finmarchicha var. finmarchica and var. jokelae) at five different botanic gardens: in their home environments in Svanvik, northern Norway, and in Oulu, northern Finland, as well as in Rauma and Helsinki further south in Finland and in Tartu, Estonia.

As expected by the researchers, both varieties fared poorer in the southern gardens compared to Oulu and Svanvik, indicating that a warmer climate may be fatal for the species if it is incapable of adapting or relocating.

“We were surprised, however, by our finding that the Finnish populations were more successful in northern Norway than in Oulu – even more successful than the Norwegian variety there, in its home environment,” says Postdoctoral Researcher Maria Hällfors from the Research Centre for Ecological Change at the Faculty of Biological and Environmental Sciences, University of Helsinki.

“This indicates that global warming already affects this plant species. We can only speculate how many other species are suffering from changes to their environment, if they, too, are unable to keep up with climate change,” Hällfors says.

The researchers suggest that the poor adaptability of Siberian primrose in relation to global warming may contribute to the demise of these populations.

“Siberian primrose has no natural dispersal route further north. One way to help species like this to survive current and future challenges would be to relocate them, by human hand, further north. In other words, species could be protected by what is known as assisted migration,” Hällfors contemplates.

Another option is to ensure that species have sufficiently large high-quality habitats to preserve populations at a viable level. This would ensure enough genetic variation within the populations, that is, different individuals that have a higher probability to posit characteristics that are suitable in the new conditions.

“In any case, investments in ex situ conservation, or the conservation of species outside their natural habitat, are needed. As an example, seeds of a species can be stored in a seed bank from where the species could be re-introduced to nature.” Hällfors notes.