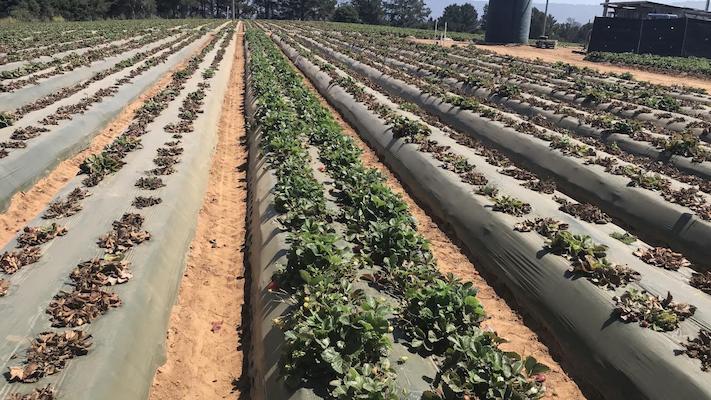 Strawberry losses from Fusarium wilt could become less of a threat after researchers at the University of California, Davis, discovered genes that are resistant to the deadly soil-borne disease.

The findings, published in the journal Theoretical and Applied Genetics, are the culmination of several years’ work, and the discovery will help protect against disease losses, said Steve Knapp, director of the Strawberry Breeding Program at UC Davis.

“What we’ve accomplished here is important and it’s valuable for the industry and it’s going to protect growers,” Knapp said.

Strawberries are a key crop in California, where about 1.8 billion pounds of the nutritious fruit are grown each year, making up roughly 88% of what is harvested in the United States.

Finding the genes could prevent a Fusarium wilt pandemic.

“The disease has started to appear more often up and down the state,” said Glenn Cole, a breeder and field manager with the Strawberry Breeding Program. “Once the wilt gets in, the plant just crashes. You have total die out.”

UC Davis scientists screened thousands of strawberry plants in the College of Agricultural and Environmental Sciences’ nursery and took DNA samples. They then used genetic screening and developed DNA diagnostics to identify genes that are resistant to the primary race of Fusarium wilt.

“The genes have been floating around in the strawberry germplasm for thousands of years,” Cole said, but no one worked to identify them.

This latest development brings “strawberry into the 21st century in terms of solving this problem,” Knapp said.

This work means breeders can introduce the resistant gene into future strawberry varieties. This fall the program will release new cultivars that have the Fusarium wilt resistance gene. And the DNA diagnostic tools will help breeders respond to new Fusarium wilt variants that develop.

“There will be new threats and we want to be prepared for them,” Knapp said. “We want to understand how this works in strawberries so that as new threats emerge, we can address them as rapidly as possible.”

“If you don’t have Fusarium resistance, you’re done,” Cole said. “The disease could be around more than you think.”

Fusarium wilt hasn’t traditionally been an issue, but when the fumigant methyl bromide was phased out in 2005, things changed. The disease was in the soil, and without the fumigant, instances of wilt increased, especially in areas where crops weren’t rotated.

Knapp and Cole have informed the industry about current strawberry varieties that have the resistance so they can select plants with that added protection. The new resistant varieties coming out later this year will be suitable for several growing seasons.

Plant scientists have been breeding strawberries at UC Davis since the 1930s, and they have released more than 60 patented varieties through the public breeding program.

The research was funded by UC Davis and grants from the USDA National Institute of Food and Agriculture Specialty Crop Research Initiative.