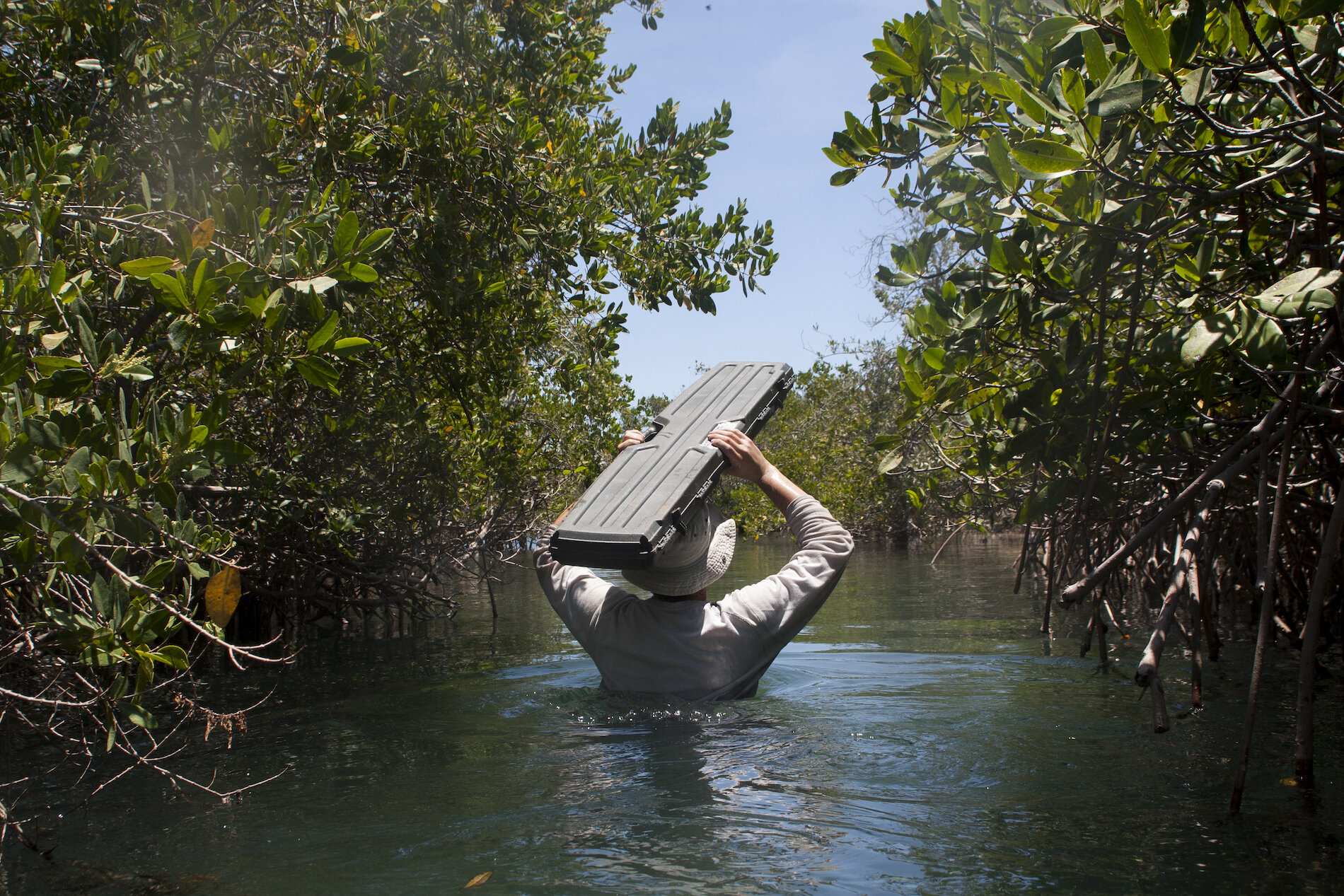 Mexican mangroves have been capturing carbon for 5,000 years

Researchers have identified a new reason to protect mangrove forests: they’ve been quietly keeping carbon out of Earth’s atmosphere for the past 5,000 years.

Mangroves thrive in conditions most plants cannot tolerate, like salty coastal waters. Some species have air-conducting, vertical roots that act like snorkels when tides are high, giving the appearance of trees floating on stilts.

A UC Riverside and UC San Diego-led research team set out to understand how marine mangroves off the coast of La Paz, Mexico, absorb and release elements like nitrogen and carbon, processes called biogeochemical cycling.

As these processes are largely driven by microbes, the team also wanted to learn which bacteria and fungi are thriving there.

The team expected that carbon would be found in the layer of peat beneath the forest, but they did not expect that carbon to be 5,000 years old. This result, along with a description of the microbes they identified, is now published in the journal Marine Ecology Progress Series.

“What’s special about these mangrove sites isn’t that they’re the fastest at carbon storage, but that they have kept the carbon for so long,” said Emma Aronson, UCR environmental microbiologist and senior co-author of the study. “It is orders of magnitude more carbon storage than most other ecosystems in the region.”

Peat underlying the mangrove trees is a combination of submerged sediment and partially decayed organic matter. In some areas sampled for this study, the peat layer extended roughly 10 feet below the coastal water line.

Little oxygen makes it to the deepest peat layer, which is likely why the team did not find any fungi living in it; normally fungi are found in nearly every environment on Earth. However, oxygen is a requirement for most fungi that specialize in breaking down carbon compounds. The team may explore the absence of fungi further in future mangrove peat studies.

There are more than 1,100 types of bacteria living beneath the mangroves that consume and excrete a variety of chemical elements. Many of them function in extreme environments with low or no oxygen. However, these bacteria are not efficient at breaking down carbon.

The deeper you go into the peat soils, the fewer microorganisms you find. Not much can break down the carbon down there, or the peat itself, for that matter,” said Mia Maltz, UCR microbial ecologist and study author. “Because it persists for so long, it’s not easy to make more of it or replicate the communities of microbes within it.”

There are other ecosystems on Earth known to have similarly aged or even older carbon. Arctic or Antarctic permafrost, where the ice hasn’t yet thawed allowing a release of gases, are examples. Potentially, other mangrove forests as well. The researchers are now scouting mangrove research sites in Hawaii, Florida and Mexico’s Yucatan Peninsula as well.

“These sites are protecting carbon that has been there for millennia. Disturbing them would cause a carbon emission that we wouldn’t be able to repair any time soon,” said Matthew Costa, UC San Diego coastal ecologist and first author on the paper.

Carbon dioxide increases the greenhouse effect that is causing the planet to heat up. Costa believes that one way to keep this issue from worsening is to leave mangroves undisturbed.

“If we let these forests keep functioning, they can retain the carbon they’ve sequestered out of our atmosphere, essentially permanently,” Costa said. “These mangroves have an important role in mitigating climate change.”