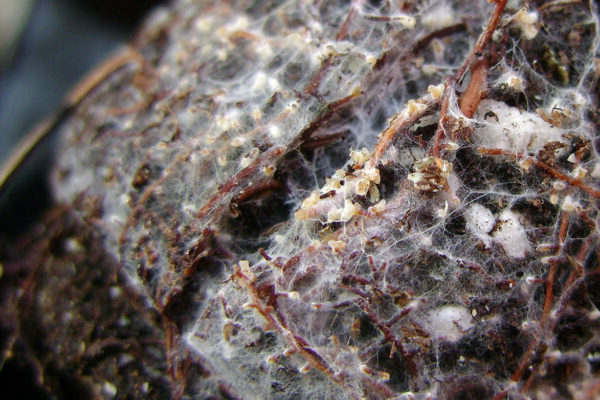 The secret drivers of tree growth

Most trees live in symbiosis with fungi. ETH Zurich researchers show just how important this partnership is for tree growth through the first-​ever comprehensive data analysis compiled for European forests on a massive scale.

Most of the world’s tree species have a close relationship with the fungi, known as ectomycorrhizae, that grow on their roots. These form a dense network around the fine roots, supplying the trees with nutrients and protecting them from pathogens. In return, the fungi receive energy in the form of carbohydrates, which the trees produce via photosynthesis. Scientists have known about this mutualistic relationship for a long time.

What has been missing, however, is a full understanding of the extent to which ectomycorrhizal fungi influence the growth of mature trees and whole forests. It has long been assumed that physical factors such as temperature, rainfall and anthropogenic nitrogen input into the soil were the principal factors influencing tree growth, while the effect of the fungal communities hidden underground has been hard to measure and over-​looked.

But now, postdoc Mark Anthony and fellow members of the group led by Tom Crowther, Professor of Global Ecosystem Ecology at ETH Zurich, have changed all that. Studying five species of the most common European forest trees, they show that differences in fungal communities are linked to even greater variation in tree growth than local climate conditions and anthropogenic nitrogen inputs. The study was recently published in the journal ISME.

“Differences in ectomycorrhizal fungal communities correspond to a tree-​fold increase in tree growth rates. These fungi also provide a clearer ecological explanation for differences in tree growth compared to other factors such as temperature and rainfall,” says Mark Anthony, lead author of the study.

The fastest growing trees were found where ectomycorrhizal fungal communities are highly adapted to extract the inorganic nitrogen compounds ammonium and nitrate from soil and make these available to the trees. Inorganic nitrogen is found in most fertilisers, is the most energetically beneficial form of nitrogen, and is an excellent growth promoter of plants.

There was slower growth in forest trees where local ectomycorrhizal fungal communities are adapted to supply trees with nitrogen from organic sources. This type of nitrogen is found in dead, decaying biomass in the ground. To release it, the fungi must first generate special enzymes to depolymerize and break down the biomass. Doing this costs the fungi more energy than directly tapping inorganic nitrogen from the soil and in turn it also costs trees more. Since fungi that tap organic nitrogen draw their required energy from tree partners, the trees themselves are left with less energy to devote to their own growth.

Identifying fungi and their functions

To gain these new insights, the researchers identified the ectomycorrhizal fungi present in soil samples across 137 European forest monitoring plots. They then paired each type of fungus present with its fully sequenced genome to determine the function each one has within the overall forest ecosystem. Finally, they correlated the various functions of the fungi with decades of tree growth data to reveal the relationship between ectomycorrhizal fungi and tree growth. The species of tree investigated included the deciduous trees oak and beech as well as the conifers pine and spruce.

The team’s findings will have an impact on future research and on forestry itself. Researchers can now identify the types of fungi and their properties that will allow trees to grow faster, or indeed slower. In this way, this study can help the forestry sector to inoculate certain woodlands using specific fungal communities in order to effect targeted changes in tree growth.

“Inoculating tree seedlings with fungi is already an established practice. Our work provides a solid scientific basis for this practice and can help improve it,” Anthony says.

He also envisages applications related to climate change and rapidly changing ecological conditions. First, faster tree growth could present a quick way of absorbing more carbon from the atmosphere. Second, some trees no longer grow well in certain areas due to global change; new fungal partners could be sought for these trees to help them survive.

Survival advantage in the future climate

“In the future, fungal communities that utilise organic nitrogen could be advantageous for many species of tree,” Anthony says. This is because rising temperatures and CO2 concentrations promote plant growth. To grow faster, trees draw on easily obtainable inorganic nitrogen. In doing so, they deplete stores of this kind of nitrogen more quickly, which in turn could slow long-​term growth. This is in contrast to the fungal communities that utilise organic nitrogen, which is more abundant in the soil albeit harder to access. The right fungi could ensure that their tree partner grow steadily into the future by capturing this organic nitrogen over the long term.

Read the paper: The ISME Journal