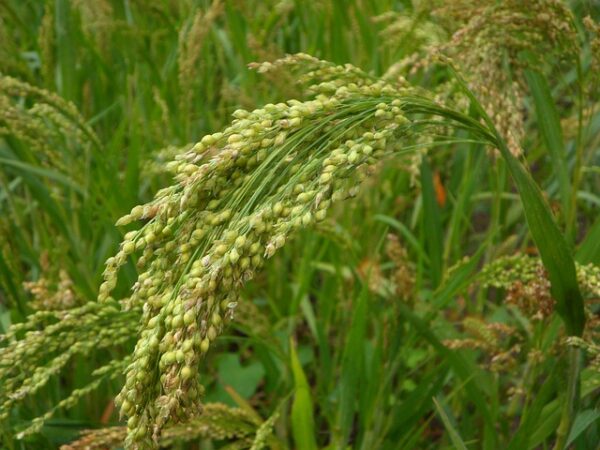 Millets are a group of highly nutritious climate resilient small seeded grasses, widely grown around the world as cereal crops or grains for fodder and human food. Millets are particularly important crops in the semi-arid tropics of Asia and Africa, where they contribute to 97% of millet global production. Millet’s productivity and short season under dry, high-temperature conditions make them a favourite among farmers in those environments. Generally, these are rain fed crops grown in areas with low rainfall and thus resume greater importance for sustained agriculture and food security.

Considering the importance of these nutritious small grain crops the U.N. General Assembly recently adopted a resolution, sponsored by India and supported by more than 70 countries, declaring year 2023 as the International Year of Millets. The resolution is meant to extend public awareness on the health edges of millets and their suitableness for cultivation beneath robust conditions marked by global climate change.

The practice of consuming millets as part of the daily diet is not new to India. Millets had been the major staple food in central to southern India and hilly regions of Uttarakhand for centuries till the time of the Green Revolution.

In general millets are rich source of fibre, minerals and B-complex vitamins. Yet, high fibre content and presence of some anti-nutritional factors like phytates and tannins in millets affect bioavailability of minerals.

This post aims to include the nutritional profile of small millets viz.ragi (finger millet), korra (foxtail millet), arke (kodo millet), sama (little millet), chena/barr (proso millet) and sanwa (barnyard millet). Almost all the millets are used for human consumption in most developing countries, however their use has been primarily restricted to animal/ bird feed in developed countries.

Finger millet (Eleusine coracana L.), ragi or mandua is one of the important millets grown widely in various regions of India and Africa. Regarding protein (6-8%) and fat (1-2%) it is equivalent to rice and with respect to mineral and micronutrient contents it is superior to rice and wheat. Nutritionally; it has high content of calcium (344 mg/100g), dietary fibre (15-20%) and phenolic compounds (0.3–3%). Finger millet contains important amino acids viz isoleucine, leucine, methionine and phenyl alanine which are deficient in other starchy meals. Finger millet is conjointly acknowledged for many health benefits such as anti-diabetic, antitumerogenic, atherosclerogenic effects. (Amir et., al., 2014) and (Ganapathy, K. N., 2017)

Foxtail millet (Setaria italica L.), also known as Italian millet, is high in carbohydrates. When compared to rice, it has twice as much protein. It contains minerals such as copper and iron. It provides a host of nutrients, has a sweet nutty flavour and is one of the most digestible and non – allergic grains. Its protein characterisation showed as a potential functional food ingredient and the essential amino acid pattern rich in lysine suggest a possible use as a supplementary protein source. (Ravindran, 1992). This millet oil could be a good source of natural oil rich in linoleic acid and tocopherols (liang et. al., 2010).

Kodo (Paspalum scrobiculatum L.) has high protein content (11%), low fat (4.2%) and very high fibre content (14.3%). It is rich in B vitamins especially niacin, pyridoxin and folic acid as well as minerals such as calcium, iron, potassium, magnesium and zinc. It contains a high amount of lecithin and might be beneficial for strengthening the nervous system (Padulosi et.al., 2009).

Little millet (Panicum miliare L.) is smaller than other millets. It is high in iron content and has high antioxidant activities. It contains about 38% of dietary fiber (Ganapathy et. al., 2017)

Proso millet (Panicum miliaceum L.) contains the highest contain of proteins (12.5%) among the small millets. Health benefits of proso millet come from its unique properties. It has significant amounts of carbohydrate and fatty acids. It is cheaper source of manganese as compared to other conventional sources like spices and nuts. It contains high amounts of calcium which is essential for bone growth and maintenance. It reduces cholesterol levels and reduce the risk of heart diseases (Gomashe et. al., 2015, 2017).

Results suggest that the it may also improve glycemic responses and plasma levels (Park et. al., 2008). In addition, proso millet protein could be of use for potential therapeutic intervention in type 2 diabetes (Devi, et al., 2011).

Barnyard millet (Echinochloa colona L.) is one of the hardiest millets, which is called by several names viz., Japanese barnyard millet, ooda, oadalu, sawan, sanwa, and sanwank. Nutritionally, barnyard millet is a fair source of protein, which is highly digestible and an excellent source of dietary fibre with good amounts of soluble and insoluble fractions (Veena et. al. 2005). The carbohydrate content is low and slowly digestible (Veena et al. 2005), which makes the barnyard millet a natural “designer food“. In the present days of increased diabetes mellitus, barnyard millet could become a food of interest (Gomashe et. al., 2015, 2017).

Millets can sustain in harsh environment with limited water resources where other crops grow or yield poorly. Millets are very adaptable: they thrive in dry regions, on clay soils, in wet lowlands or in alluvial lands. Their root systems are powerful, able to descend very quickly to a great depth of soil to extract water and minerals. This characteristic partly explains their quality of hardiness and drought resistance, as well as their high adaptability and resilience to climate change.

In arid areas, small millets are very often the only crops that can be harvested in the dry season and constitute a crucial nutrient input into the household food basket. It helps to overcome scarcity food in difficult periods, therefore contributing strategically to the food security of many countries.