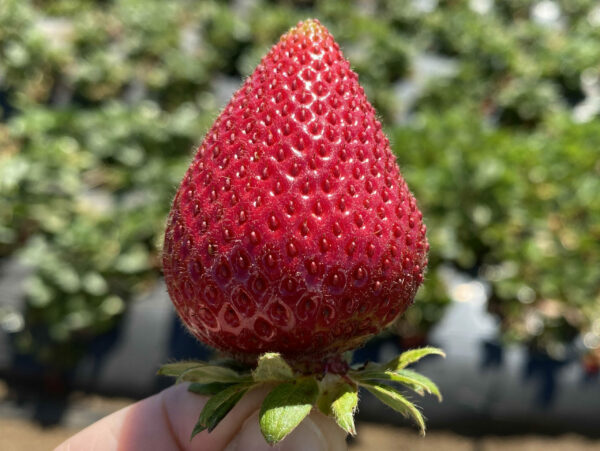 A new study from researchers at the University of Maryland’s Department of Cell Biology and Molecular Genetics addresses this issue, providing insight into exactly how flowering plants develop fruits and seeds.

“Understanding this process is especially important because common food crops—such as peanuts, corn, rice and strawberries—are all fruits and seeds derived from flowers,” said Zhongchi Liu, the study’s senior author and a professor of cell biology and molecular genetics at UMD. “Knowing how plants ‘decide’ to turn part of their flowers into fruit and seed is crucial to agriculture and our food supply.”

Funded by the National Science Foundation, the study was published in the journal Nature Communications.

In the study, Liu and her team aimed to discover how fertilization—or pollination—triggers a flowering plant to start the fruit development process. The team suspected that an internal communication system was responsible for signaling the plant to develop fruit, but the researchers were unsure how that system was being activated by fertilization or pollination.

To find out, the team simulated pollination and fruit development mechanisms using strawberry plants. Strawberries are particularly suited to fertilization modeling due to their unique structure and seed location, according to Liu.

“As an ‘inside-out’ fruit, strawberry seeds are much easier to manipulate and observe than the seeds of other fruits like tomatoes,” Liu explained. “This made it easier for us to view the seeds and extract genetic information from them at multiple stages of plant development.”

Liu and her team identified AGL62, a gene universally found in all flowering plants, as the trigger to a plant’s production of fruit and seed.

According to Liu, AGL62 stimulates the production of an essential plant growth hormone called auxin. Once the gene activates, auxin is synthesized to prompt the creation of seedcoat (the outer protective layer of a seed), the endosperm (the part of a seed that provides food for a developing plant embryo) and fruit. Auxin’s role in regulating endosperm growth is especially significant for researchers as it impacts the size of the grain and enlargement of the fruit.

“Auxin levels can limit how big an endosperm can grow and how much nutrition endosperm can accumulate for a plant embryo,” Liu said. “More auxin can boost grain size and stimulate fruit enlargement. When there’s less auxin, endosperms are unable to feed plant embryos properly and we end up with lowered crop productivity—smaller or deformed fruits that aren’t commercially viable.”

Using CRISPR, a novel gene manipulation technique, Lei Guo, the first author, successfully disrupted AGL62 function. As a result, the strawberry plants were unable to grow fruit and seed, demonstrating the critical role of AGL62 in this process.

In nature, pollination prompts the AGL62 gene to trigger the production of auxin, a process necessary for optimal fruit and seed development. But by identifying this relationship between gene and hormone, Liu and her team have laid a foundation that may allow agriculturalists to switch on AGL62 using biotechnology, bypassing pollination altogether—in other words, create ‘virgin’ fruits.

Liu believes that these findings are especially important at a time when global warming is impacting food production worldwide.

“Extreme heat kills both pollinators and pollen itself, so climate change is a big challenge for us to overcome,” Liu said. “Learning more about the AGL62 gene has given us new insight into how to potentially increase the productivity of agricultural crops, particularly the ones that make up our food supply.”

Image: Strawberries are good models for pollination research because their seeds are embedded on the fruit’s surface, allowing researchers to observe them more easily. Credit: Zhongchi Liu