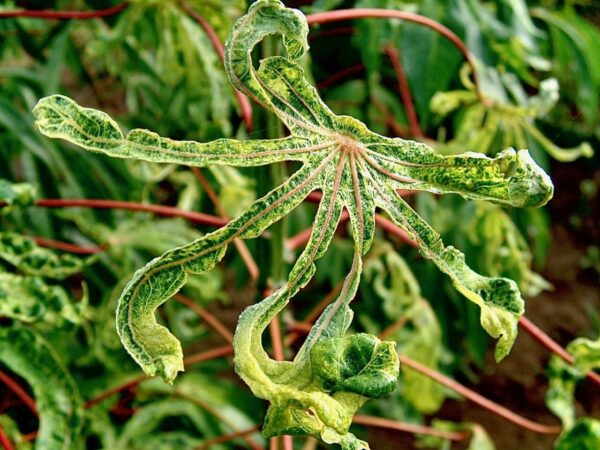 International research team aims to significantly reduce the threat of cassava mosaic disease and improve cassava yields, an important crop in the tropics

Cassava, a starchy root crop rich in carbohydrates, is one of the most important staple foods in the world; it feeds nearly one billion people, mostly in the tropics. Cassava is considered a staple in many developing countries, especially among small holder farmers, due to its drought-tolerance and ability to grow in poor soils. However, farmers in Africa, India, and Southeast Asia – some of the largest cassava producing regions in the world – too often suffer huge yield losses due to CMD. CMD infected plants are stunted and do not fully develop the storage roots that are used for food.

Cassava mosaic disease is caused by a family of closely related viruses. The virus hijacks cassava’s DNA replication system, compromising its development and thus suppressing yield. “Breeding better, CMD-resistant cassava varieties has significant implications to secure the livelihoods of smallholder farmers,” explains Taylor. CMD-resistant cassava varieties exist and are thought to have been originally identified and selected by farmers many decades ago. Many of these varieties are still widely grown and used by breeders as sources of resistance to create new, improved varieties of cassava. “Cassava remains mysterious in many ways,” says Taylor, “compared to corn or soybean, where hundreds of research labs have been working on these crops for decades.” Several years ago, Taylor’s team unexpectedly discovered plants in the field that had lost resistance to CMD, thus triggering the present investigation into the genetic basis for resilience to the virus. “If CMD-resistance hadn’t mysteriously been lost,” describes Bart, “we may never have gone after this project.” The researchers immediately knew they had discovered something important. With initial support from the Danforth Center’s Institute for International Crop Improvement, the Danforth team initiated experiments to discover the genetic basis for CMD resistance. The collaboration grew to include partners at NaCRRI, UCLA and ETH Zurich and was supported with additional funding from the Bill & Melinda Gates Foundation.

By identifying the exact genetic region that confers CMD-resistance – in fact, down to a single nucleotide – their work sheds light on how resistance was acquired and how to maintain resistance to secure yields in the future. Additionally, similar viruses “attack many other crops, including cotton and tomato,” says Bart. “This discovery could provide disease-resistance strategies in those crops, too.” Studying cassava in the field is crucial to the researchers’ discoveries. For two years, the NaCRRI team grew cassava and documented disease prevalence in the field in Uganda – a recognized “hotspot” for CMD. The Danforth Center and NaCRRI, which is based near Kampala, have built a longstanding relationship, allowing levels of collaboration and resource-sharing between institutions. These new findings were the result of combining expertise from researchers across the globe – and including critical contributions from Danforth Center postdoc and co-first author Dr. Ben Mansfeld, Research Associate Kerrigan Gilbert and additional key co-authors. “The other collaborators,” adds Taylor, “were the farmers in Africa who identified CMD-resistant plants and maintained them over generations. We have now discovered the gene behind the resistance.”

The discovery of a single mutation that confers resistance to CMD has opened the door for more questions and opportunities. First and foremost, explains Bart, “we need to understand the mechanism of how the mutation confers resistance.” Understanding the mechanism of resistance will likely shed light on how stable the resistance will be over time. “There is a lot more to learn,” Taylor concludes. “How many other secrets are out there about cassava we have yet to discover?” The research team will continue their collaborative and global studies of cassava, and, in the process, highlight the importance of focusing research on lesser-known crops.

This work was supported by a grant from the Bill & Melinda Gates Foundation (Investment INV-008213), funding from ETH Zurich and the Institute for International Crop Improvement at the Donald Danforth Plant Science Center.