[SYDNEY] The increasing use of groundwater for irrigation poses a major threat to global food security and could lead to unaffordable prices of staple foods. From 2000 to 2010, the amount of non-renewable groundwater used for irrigation increased by a quarter, according to an article published in Nature on March 30. During the same period China had doubled its groundwater use. 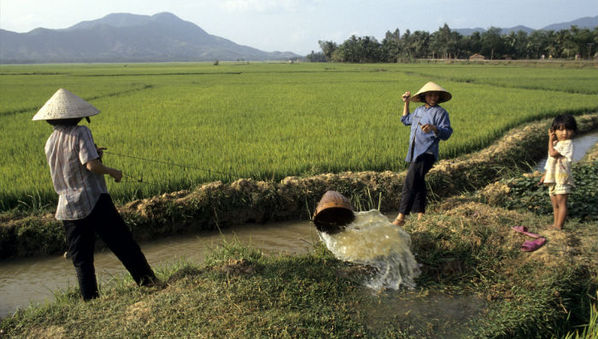 The article finds that 11 per cent of groundwater extraction for irrigation is linked to agricultural trade.

“In some regions, for example in Central California or North-West India, there is not enough precipitation or surface water available to grow crops like maize or rice and so farmers also use water from the underground to irrigate,” the article says.

The article focused on cases where underground reservoirs or aquifers, are overused. “When a country imports US maize grown with this non-renewable water, it virtually imports non-renewable groundwater,” Carole Dalin, lead author and senior research fellow at the Institute for Sustainable Resources at University College, London, tells SciDev.Net.

Crops such as rice, wheat, cotton, maize, sugar crops and soybeans are most reliant on this unsustainable water use, according to the article. It lists countries in the Middle East and North Africa as well as China, India, Mexico, Pakistan and the US as most at risk.

“Pakistan and India have been locally most affected due to groundwater depletion and exporting agricultural products grown with non-sustainable groundwater. Iran is both exporting and importing and The Philippines is importing from Pakistan, which is non-sustainable. China is importing a lot from India. Japan and Indonesia are importing, mainly from the US,” says Yoshihide Wada, co-author of the report and deputy director of the International Institute for Applied Systems Analysis’s Water Programme, Laxenburg, Austria.

Agriculture is the leading user of groundwater, accounting for more than 80 to 90 per cent of withdrawals in irrigation-intense countries like India, Pakistan and Iran, according to the report.

The researchers say efforts to improve water use efficiency and develop monitoring and regulation need to be prioritised. Governments must invest in better irrigation infrastructure such as sprinkler irrigation and introduce new cultivar or crop rotation to help producers minimise water use.

Wada suggests creating awareness by putting water labels, along the lines of food labels, “showing how much water is used domestically and internationally in produce and whether these water amounts are from sustainable or non-sustainable sources”.

Andrew Western, professor of hydrology and water resources at the University of Melbourne’s School of Engineering, suggests enforceable water entitlement systems and caps on extraction. “In recent decades, water reform in Australia has led to water having a clear economic value made explicit by a water market. This has enabled shifts in water use to cope with short-term climate fluctuations and has also driven a trend of increasing water productivity,” he says.

This piece was produced by SciDev.Net’s Asia & Pacific desk.