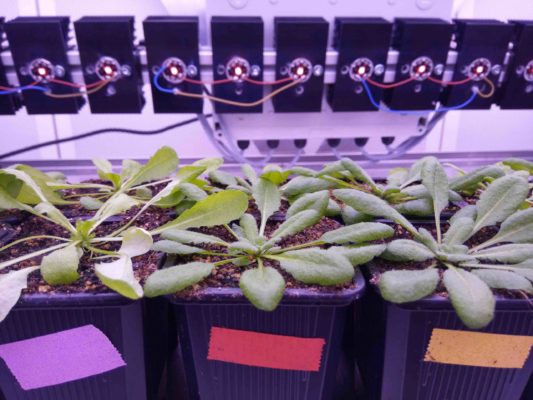 Guadalupe Fernandez-Milmanda, PhD student at the Agricultural Plant Physiology and Ecology Research Institute-University of Buenos Aires (Argentina) writes about her latest research, published in the March 2020 issue of Nature Plants.

Nowadays, we are more aware than ever of the difficulty to keep life in balance. Almost like if we were sessile organisms, we are forced to remain home while struggling with a new set of challenges due to COVID-19 outbreak. Plants may not be worried about grant writing, online teaching or taking care of little kids, yet they have to deal with many environmental stresses.

How do plants sense their environment? How do they cope with different challenges, like competition for resources or pest attacks?  In our latest study we explain the role of ST2a, a gene up-regulated by plant proximity cues, which participates in the inactivation of jasmonates –a group of regulators that orchestrate defense responses. This way we demonstrate how competition signals promote plant growth at the expense of reduced defenses. Let’s dive into a little introduction.

Activation of the plant immune system: Role of Jasmonates

After the detection of a potential consumer organism, various hormones coordinate the activation of the plant immune system. Jasmonates, which include jasmonic acid (JA) and related metabolites, set up plant defenses against herbivores and necrotrophic pathogens. JA is also a growth repressor. One of the key aspects of JA-inducible responses is that their expression is regulated by the ecological context.

Plants use light signals perceived by specific photoreceptors to detect the proximity of other plants (potential competitors). Low ratios of red (R) to far-red (FR) radiation result in partial inactivation of the photoreceptor phyB, which triggers a suite of morphological changes known as shade-avoidance syndrome (SAS). These changes include elongation of internodes and petioles as well as reorientation of leaves. In other words, growth toward the light is enhanced. SAS allows plants to position their leaves in well-illuminated areas. It is an essential determinant of plant competitive ability in crowded populations.

The attenuation of defenses that occurs simultaneously with SAS is not a consequence of redirecting resources to growing. Inactivation of phyB attenuates JA responses. Yet, the molecular links between the phyB and JA signaling pathways are still not well understood.

Recent work in our lab has focused on exploring how environmental cues regulate the dynamics of JA-related metabolites. To do so, we exposed plants to white light or white light supplemented with FR to simulate the proximity of competitors and sprayed them with Methyl Jasmonate (MeJA) . MeJA is commonly used to induce JA-mediated defense responses. Once inside plant tissue, MeJA is converted to JA. We found that supplemental FR reduced the concentrations of JA, while enhancing the accumulation of an inactive jasmonate, HSO4-JA. In vitro, this metabolite is produced by the sulfotransferase ST2a. We found that the ST2a gene is strongly and consistently upregulated by FR treatments that simulate competition.

We used different genetic tools to understand the effects of light-induced changes in ST2a transcription on the regulation of JA metabolism. st2a null alleles -plants lacking ST2a – could not produce HSO4-JA and accumulated higher levels of JA under FR than their wild type counterparts.

These results raised a question. Are the effects of ST2a on JA levels functionally connected with changes in the defense phenotype? In a series of experiments, we observed that FR downregulated JA response markers (genes and metabolites), as expected. Interestingly, the attenuation of JA defense markers was missing in st2a plants, which were also more resistant to the attack of caterpillars and the fungus Botrytis cinerea than wild type plants.

st2a plants were similar to wild type under ambient light and displayed normal SAS phenotype in response to FR. But, when the plants received low doses of MeJA, the SAS response was significantly attenuated in st2a plants.

Our results suggested neighbor proximity cues detected by phyB promote the inactivation of jasmonates by enhancing JA catabolism. Sulfotransferase ST2a acts to reduce the pool of active jasmonate metabolites and represents a direct molecular link between light sensing and defense signaling in plants. These results could bring new insights into our models of the mechanisms that regulate resource allocation between growth and defense in plants.

This is the first post published in the frame of our ECRi communication and dissemination activity. Learn more here.