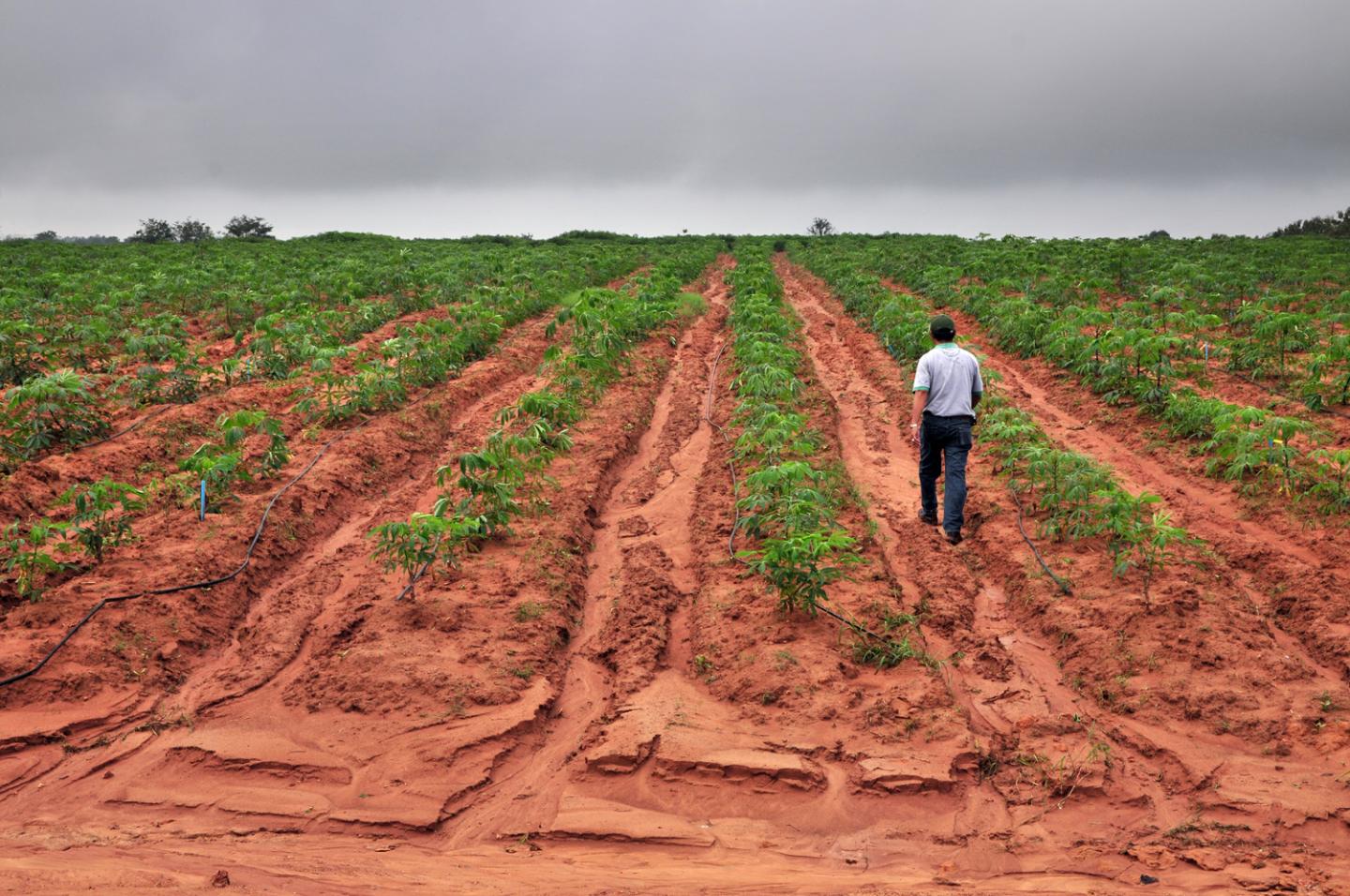 How did an ancient plant from Latin America become Asia’s second-most-important cash crop?

Valued at dining room tables and factory floors alike, cassava is worth about $10 billion in Asia. The continued growth of the commodity faces challenges from climate change, land degradation and limited investment in crop improvement and disease.

Half a century ago, cassava was a simple staple crop for some smallholder farmers in Asia eking out a living in harsh landscapes.

The hardy crop that Europeans brought from Latin America many centuries before was a dependable source of nutrition – as long as it was skillfully processed to remove the toxins from bitter types to be turned into food.

While sweet varieties of cassava remain a staple in places like Indonesia, which is the world’s third-largest producer, things have changed a lot for Manihot esculenta, the scientific name for yuca, manioc or mandioca.

Today, yields in Asia have increased dramatically and industry is growing bitter varieties for starch, biofuels and a variety of other ingredients. In Southeast Asia, only sugarcane and rice surpass cassava in total tonnage produced. Some 8 million farmers from India to China depend on the crop for food and income.

Ideally suited to flourish despite climate change, cassava is poised to become an even more important crop in the next fifty years in Asia, argue scientists in a comprehensive review of cassava research over the last 50 years in Asia. The article was published in March in Breeding Science.

“We need to continue investment in increasing yields, even more so under climate change, land degradation and new pests and disease outbreaks; the next big thing is improving the resilience of our cassava resources,” said Luis Augusto Becerra Lopez-Lavalle, the program leader for cassava at the Alliance of Bioversity International and the International Center for Tropical Agriculture (CIAT).

The article looks at increases in yields, breeding strategies, development and deployment of different varieties over the last half-century. Countries in the study include China, India, the Philippines, Laos, Thailand and Vietnam. Authors from more than a dozen institutions contributed to the review, which summarizes major contributions from almost 170 different research articles.

The authors highlight the striking versatility and resilience of cassava, which has been gradually improved and adapted to local needs through cutting-edge plant breeding and agronomy.

Becerra said many advances are due to the rich collection of cassava germplasm at the Alliance’s genebank in Colombia, which includes a large collection of native varieties generally more diverse than varieties found further afield. By tapping the resources of the genebank and collections kept by breeding programs around the world, scientists have found traits to make widely used varieties more productive and resistant to disease and climate extremes.

In Vietnam, yields have increased from about 3 tons per hectare to 20 tons, largely through improved varieties and fertilizer management. Intercropping – sowing other crops alongside cassava – and crop rotation to include maize, peanuts, and beans, has improved soil fertility and increase farmer incomes.

“The introduction of germplasm into national breeding programs from the Alliance combined with improved agronomic practices markedly increased cassava yield in the region,” said lead author Al Imran Malik, who is based at the Alliance’s Lao PDR office. Malik also credited partners who support the new ideas and initiatives.

In Indonesia, breeding has focused on better-tasting and more nutritious cassava. In China, scientists have bred high-starch industrial cassava ideal for higher latitudes, which are generally cooler than those in cassava’s native range.

“Over the past decades, cassava researchers in Asia, particularly breeders, have had to respond to changing market and policy conditions to ensure that the crop and the farmers that grow it are competitive in global markets,” said Jonathan Newby, the research coordinator for the Alliance’s cassava program in Southeast Asia.

Across the region today, researchers study erosion and health of the soil, sustainable intensification, artificial intelligence, and advanced genetics for crop improvement. Scientists are also intensely focused on controlling emerging diseases, which threaten productivity gains. Last year, the Alliance worked with national researchers and partners to draw up an emergency control plan for cassava mosaic disease (CMD), a project led by Becerra.

Becerra is also a global research leader in the CGIAR Research Program on Roots, Tubers and Bananas, which contributed to the study.

One of the great lessons of the review was the extent to which local collaboration and ground-up initiatives were key to cassava improvement in the region.

In particular, the Alliance led partnerships with national agricultural research institutes in the region. NARIs from Vietnam, Thailand, China, Japan, Indonesia, Lao PDR, and Cambodia collaborated on many border-crossing cassava projects in the last few decades.

Partnerships among research organizations in Asia facilitated the understanding of specific contexts, allowing researchers to create appropriate recommendations in breeding and agronomy so farmers could grow cassava in accordance with their needs.

The Chinese Academy of Tropical Agricultural Sciences (CATAS) emphasized that the development in cassava research in Asia has great potential outside the region.

Outside of research partnerships, Dr. Malik said funders have been key supporters for ongoing, long-term research. Continued partnerships and support are key for controlling CMD, which requires regionally coordinated efforts in research on seed systems, pest and disease control, and capacity-building.

No longer ‘a crop for the poor’

While there is still an impression that cassava is a poor man’s crop in Asia, Becerra and Newby push back on this notion, highlighting its potential for wealth creation amongst smallholder farmers targeting a wide global market. “The future is bright for cassava as food and as an industrial ingredient in a range of new products that modern consumers demand,” said Newby. “It will be critical that cassava breeders keep pace with these changes and opportunities to ensure that smallholder farmers in Asia continue to reap the benefits of this ‘hidden’ crop in our daily lives.”

Becerra emphasized how different regions will contribute to a South-South knowledge transfer to ensure further prosperity for the crop, saying, “The key to cassava improvement is still at its center of origin. We ought to help sub-Saharan African farmers obtain the same genetic gains as Asian resource-poor farmers, where the Alliance built on genetic resources from Latin America.”