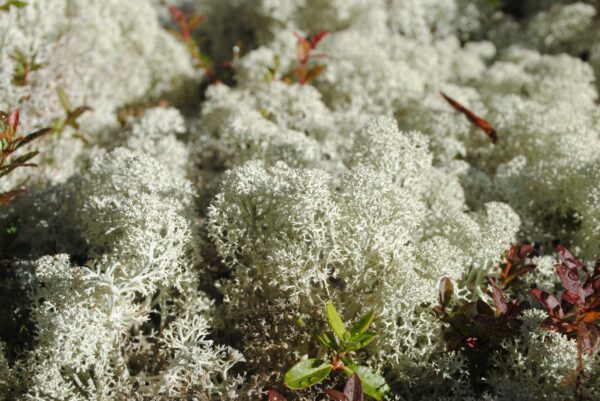 In northern Canada, the forest floor is carpeted with reindeer lichens. They look like a moss made of tiny gray branches, but they’re stranger than that: they’re composite organisms, a fungus and algae living together as one. They’re a major part of reindeer diets, hence the name, and the forest depends on them to move nutrients through the ecosystem. They also, at least in parts of Quebec, are having a lot more sex than scientists expected. In a new study in the American Journal of Botany, researchers found that the reindeer lichens they examined have unexpected levels of genetic diversity, indicating that the lichens have been doing more gene-mixing with each other than the scientists would have guessed.

“We were surprised because this species of reindeer lichen had always been considered mainly a clonal species that reproduces asexually,” says Marta Alonso-García, the paper’s lead author and a postdoctoral fellow at Quebec’s Université-Laval. “It doesn’t follow the expected pattern.”

Reindeer lichens swing both ways: they can reproduce sexually via spores, or they can asexually clone themselves. When fungi reproduce sexually, they send out root-like structures toward a neighboring fungus and exchange genetic information when they touch. They then release spores, single cells containing genetic material, which travel on the wind and disperse. When they land, they start growing and produce a new baby fungus that’s genetically distinct from its parents. In asexual clonal reproduction, on the other hand, a piece of the entire lichen (fungus and alga), called the thallus, is pinched off and regrows into a whole organism that’s genetically identical to its parent.

The two reproductive methods have different advantages. “Sexual reproduction is very costly,” says Felix Grewe, the co-director of the Field Museum’s Grainger Bioinformatics Center and a co-author of the study. “You have to find your partner, it’s more difficult than reproducing asexually. But many organisms do it because when you have this combining and mixing of genetic traits, it enables you to weed out negative mutations long-term among other benefits.”

The researchers were examining reindeer lichens (Cladonia stellaris) to learn about their genetic patterns. “We used DNA sequences to tease apart the genetic relationships between populations of this lichen,” says Alonso-García. “We tested whether individuals from northern Quebec (Hudson Bay) were genetically different from those from the South (Parc National des Grands-Jardins, two hours from Québec City). At the same time, due to its important role in the colonization process after a fire, we evaluated lichen genetic diversity along a post-fire succession.”

Lichens can reveal a lot about how wildfires affect ecosystems. “Wildfire is the most significant disturbance in the world’s northernmost forests, and it plays a major role in determining the distribution and composition of plant communities,” says Alonso-García. “In Eastern North America, four successional vegetation stages are generally identified after a fire. During the first stage, crustose lichens and mosses colonize the burned surface. Subsequently, the soil is covered by cup and horn lichens. The landscape remains mostly uniform for around 20 years until the arrival of fruticose lichens which replace the previous vegetation. Cladonia stellaris arrives the last one, usually three or four decades after fire.” By studying genetic variations in reindeer lichens, the researchers hoped to learn how lichens recolonize an area after a fire.