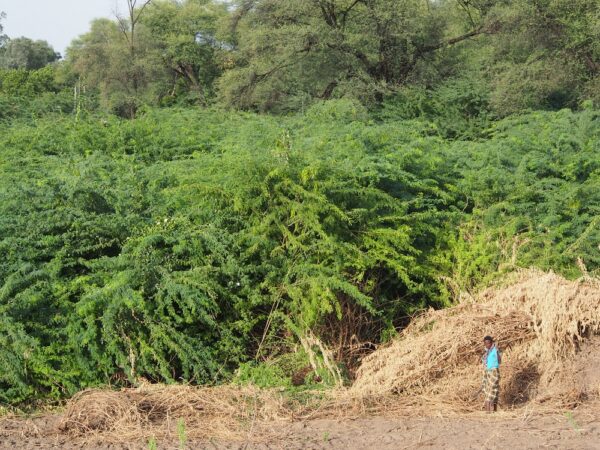 New research has revealed how an invasion of the alien evergreen tree, Prosopis juliflora seriously diminishes water resources in the Afar Region of Ethiopia, consuming enough of this already scarce resource to irrigate cotton and sugarcane generating some US$ 320 million and US$ 470 million net benefits per year.

A team of Ethiopian, South African and Swiss scientists, including lead author Dr Hailu Shiferaw, Dr Tena Alamirew, and Dr Gete Zeleke from the Water and Land Resource Centre of Addis Ababa University, Ethiopia, and Dr Sebinasi Dzikiti from Stellenbosch University, South Africa, and Dr Urs Schaffner, Head Ecosystems Management, CABI, have been assessing water use of prosopis and its impacts on catchment water budget and rural livelihoods in the dry Afar Region of Ethiopia, since 2015 as part of a long-term collaboration in the framework of the CABI-led Woody Weeds project.

Their new study, published in Scientific Reports, provides evidence that this alien tree, which has invaded both the floodplains of the Awash River and the surrounding dryland habitats, uses excessive amounts of water by consuming approximately 3.1-3.3 billion m3/yr of water throughout the year in the Afar Region.

Dr Shiferaw said, “We found that single trees of the evergreen prosopis consume between 1-36 liters of water per day, depending on stem diameter and site conditions. Prosopis trees not only use water throughout the year, but even consume more water during the dry season, when almost all native plants have shed their leaves. The high sap flow of prosopis in the drylands throughout the year may be due to exceptionally deep roots that penetrate up to 50m below the surface, where they tap into groundwater that cannot be used by native trees with shorter roots.”

In the context of climate change and an increasing frequency of drought events in dry regions of Sub-Saharan Africa, the report concludes that this invasive tree is likely to have serious consequences for sustainable livelihoods in the region unless its spread is contained and its density reduced.

Dr Urs Schaffner, senior author and Head Ecosystems Management at CABI in Switzerland, said, “Since its introduction in the Afar Region in the 1980s, prosopis has invaded 1.2 million ha of land. Thus, unless the spread of prosopis is contained and the density reduced in areas where it has become established, this invasive tree is likely to have serious consequences for sustainable livelihoods in the region. The estimated net benefits from water savings alone would strongly justify the implementation of a coordinated control programme.”

The report clearly supports findings from work undertaken in South Africa on water use by invasive tree species. Prof Brian van Wilgen from Stellenbosch University, South Africa, previous scientific advisor to the ‘Working for Water’ programme in South Africa and partner of the Woody Weeds project, said, “In South Africa, invasive alien trees are estimated to reduce surface water runoff by between 1.5 and 2.5 billion m3 per year, and this could increase substantially as the invasions continue to spread. In addition, invasive trees in drier parts of the country have substantially reduced water in groundwater aquifers on which local farmers and towns are totally reliant.”

He further explained that, “These losses have serious consequences for a country where water scarcity limits economic activity and growth. The government in South Africa has responded by creating a multi-million dollar, national-scale programme, dubbed ‘Working for Water’, to control invasive alien trees, and has also passed legislation preventing further propagation of invasive alien trees and requiring landowners to control them.”