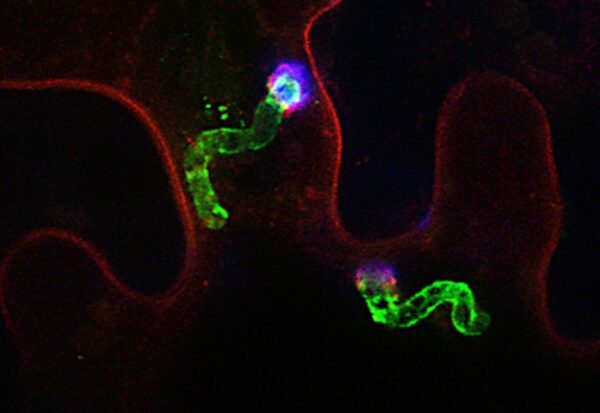 Many important crop plants can be devastated by pathogens including bacteria, fungi and viruses. Knowing exactly how some plants respond could give researchers the information to breed crops with the best disease-fighting power or even design new and improved immune sensors in genetically modified plants.

Plant cells contain immune sensors that detect the presence of specific proteins called effectors, which infectious microbes use to facilitate infection. These immune sensors, called NLRs, have previously been found in specific ‘compartments’ within the plant cell, such as the nucleus or membrane.

The new study identified the first-known ‘mobile’ NLR immune receptor that navigates to where the microbe is invading. The research, led by Imperial College London researchers, is published in Proceedings of the National Academy of Sciences.

Lead author Dr Cian Duggan, from the Department of Life Sciences at Imperial, said: “The world’s farmers lose 20-40% of their crops each year to plant pests and diseases, even with chemical control strategies. Understanding exactly how plants sense and eliminate disease-causing agents could allow us to engineer genetic control strategies by improving their immune systems.”

The team studied the fungus-like microbe Phytophthora infestans, which causes potato blight, the disease responsible for triggering the Irish potato famine. Normally, what goes on inside the plant cell when P. infestans invades is difficult to study, since the cell quickly responds by causing its own death, aiming to starve the pathogen of nutrients.

The researchers were able to create a variant of the NLR that did not immediately respond with cell death, but left the preceding parts of the immune response intact, allowing them to study the cell reactions with high-powered microscopy. They attached fluorescent markers to a group of NLRs and watched what happened.

When fungal-type pathogens like P. infestans invade, they form specialised infection structures by creating extensions of themselves that are accommodated in the plant’s cell. Around these extensions, the cells create an enigmatic membrane, called the extrahaustorial membrane (EHM).

The team found that one type of NLR gathers on the EHM, around where the pathogen releases its effector proteins. Since the EHM only forms once invasion has begun, these NLRs must have travelled to the location from one of the other compartments in the cell, showing they are not static and can move to sites of suspected infection.

After sensing the effectors from the pathogen, the team observed the NLRs changing their organisation again, forming ‘puncta’ – distinct bright spots that spread out to the cell periphery, as seen under a confocal microscope.

Based on previous work, the team think these bright spots are molecular machines called resistosomes, which gather on the plant cell’s plasma membrane and are known to purposely kill plant cells in order to starve and eliminate the invading parasite.

The team are now looking to study the mechanism in more detail, both to discover exactly how the NLRs move to the EHM, and how the relationship between receptor accumulation and release at the EHM contributes to disease resistance.