[MEXICO CITY] An international team of scientists identified a hundred genes that influence adaptation to the latitude, altitude, growing season and flowering time of nearly 4,500 native maize varieties in Mexico and in almost all Latin American and Caribbean countries.

Creole — or native — varieties of maize are derived from improvements made over thousands of years by local farmers, and contain genes that help them adapt to different environments.

“We are now using this analysis to find other genes that are of vital importance to breeders, such as those resistant to extreme heat, frost or drought — environmental conditions associated with climate change and that could affect maize production.”

“Latin American breeders will be able to use these results to identify native varieties that could contribute to improved adaptation”, Edward Buckler, a Cornell University researcher and co-author of the study published in Nature Genetics (February 6), told SciDev.Net.

The information on the genetic markers described in the study will be available online, said Sarah Hearne, a researcher at the International Maize and Wheat Improvement Center (CIMMYT) and co-author of the study. “Meanwhile, any breeder can contact us to request information”, she said.

“We are now using this analysis to find other genes that are of vital importance to breeders, such as those resistant to extreme heat, frost or drought — environmental conditions associated with climate change and that could affect maize production”, Hearne said. 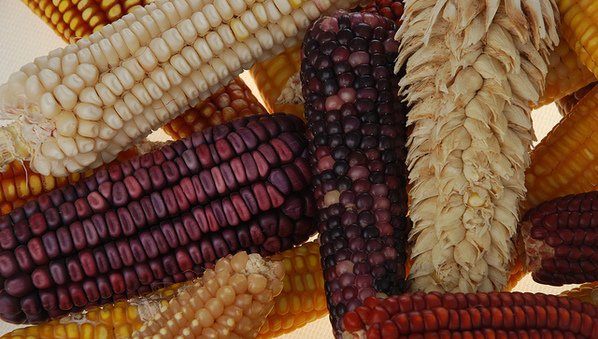 Maize ears from CIMMYT’s collection, showing a wide variety of colors and shapes. CIMMYTs germplasm bank contains about 28,000 unique samples of cultivated maize and its wild relatives, teosinte and Tripsacum. These include about 26,000 samples of farmer landracestraditional, locally-adapted varieties that are rich in diversity. The bank both conserves this diversity and makes it available as a resource for breeding.
Photo credit: Xochiquetzal Fonseca/CIMMYT.

Studying native maize varieties is extremely difficult because of their genetic variation. Although domesticated, they are wilder than commercial varieties.

For this study, the researchers cultivated hybrid creole varieties in various environments in Latin America and identified regions of the genome that control growth rates. They looked into where the varieties came from and what genetic features contributed to their growth in that environment.

Hearne added that the research team has initiated a “pre-breeding” programme with a small group of breeders in Mexico. As part of that programme, CIMMYT delivers to breeders materials from its germplasm bank of Creole maize; it also provides molecular information the breeders can use to generate new varieties.

This piece was produced by SciDev.Net’s Latin America and Carribean edition.