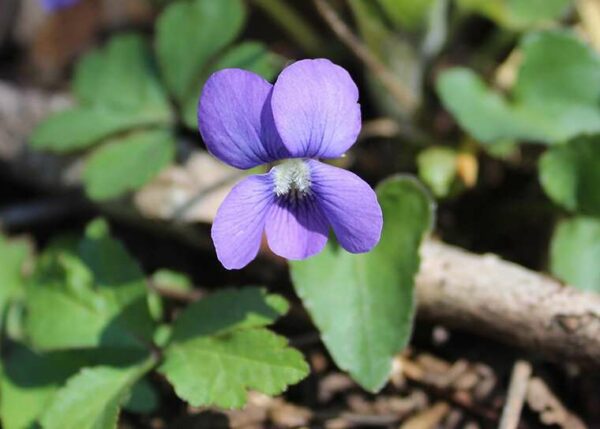 In many Missouri backyards, a carpet of small purple or white violets is a sure sign of spring.

Research from Matthew Austin, a postdoctoral fellow with the Living Earth Collaborative at Washington University in St. Louis, has found that climate change is affecting how these common native flowers reproduce.

Violets reproduce both sexually, through cross-pollination of the showy flowers we’re familiar with; and asexually, by self-seeding of less noticeable flowers that remain hidden near the base of the plant. This is called “mixed mating.” Although environmental factors drive how much a plant reproduces sexually or asexually, no study had previously looked at the impact of climate change on mixed mating.

Austin and his co-authors studied blue violet specimens from the Missouri Botanical Garden’s herbarium from 1875 to 2015 paired with temperature and precipitation data to see if flowering correlated with climate.

Among other findings, the scientists discovered that violets produced fewer showy flowers in environments with warmer temperatures and less rain, while those in cooler climates with more precipitation produced more showy flowers. As temperatures warm, violets are also blooming earlier in the year.

The study was published in the American Journal of Botany.

Image: The common blue violet, Viola sororia, is native to eastern North America, including Missouri. This wildflower blooms in early spring, sometimes into late summer, producing blue-violet flowers or white blooms with purple veining. The genus name comes from the Latin name for sweet-scented flower. Its blooms attract butterflies, and it is mainly pollinated by bees. Credit: Matthew Austin