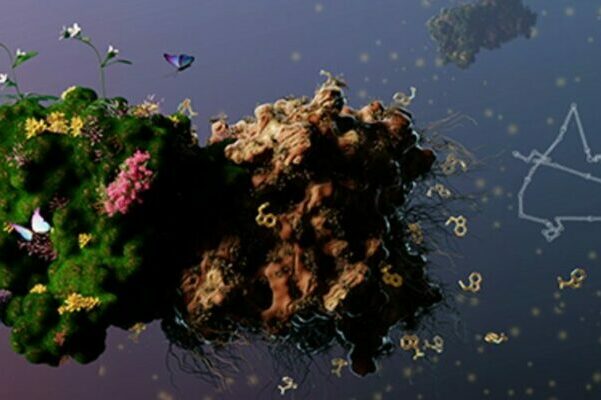 Few have had a broader impact on science than Charles Darwin. While his studies on the Galápagos Islands and his theories on evolution are well known, perhaps many are less aware of his impact on plant science. Now an international research team has made a major step forward towards explaining a central observation that all started with Darwin.

In his 1880 book, The Power of Movement in Plants, Darwin observed that plants could grow directionally in response to external stimuli such as light or gravity. He demonstrated that the part of the plant that perceives the stimulus was different from the part that responds. To explain this, Darwin proposed that an ‘influence’ must move from the site of stimulus perception to the area of response. Dawin was never able to identify this influence.

In 1926, the hormone auxin was identified as this ‘growth accelerating substance’, and later determined to be the growth factor that determines almost all plant responses to changes in environment. However, to ensure that the auxin response is partitioned to the correct part of the plant, directional transport of the auxin molecule between cells is required.

In the 1990s, a family of proteins named PIN-FORMED (PIN) were finally identified as essential for this process. They got the name from the distinct morphology derived if they are dysfunctional: The plant became a needle-like ‘pin’, without shoots or flowers.

The PIN proteins turned out to be auxin transporters. Their function is vital for the establishment of auxin gradients within plant tissues. A gradient that subsequently guide plant growth and development.

The Pedersen group has now provided the first structural basis of auxin transport by PIN proteins, and this has been combined with a comprehensive biochemical characterization with collaborators at Technical University of Munich lead by Associate Professor Ulrich Hammes.

The results finally provide the molecular mechanism behind auxin transport. It also helps to explain how a broad range of widely used herbicides, collectively known as synthetic auxins and anti-auxins, can be recognized by PIN proteins.

The results has been long underway

The project came to be due to a range of surprising and serendipitous connections, explains head of the study Associate Professor Bjørn Panyella Pedersen:

“We initiated the project in 2016 when, by chance, I heard a broad presentation on plant physiology where auxin was mentioned in passing. This reminded me of my studies in biology when I was a biology student, and I decided to read up on the subject. To my amazement there was no biochemical or structural characterization, and I felt that this was a place where we could make a difference.”

However, efforts were mostly stalled for almost a year until Ulrich Hammes reached out to the Pedersen lab to collaborate on a completely different project related to ion balances in algae.

“We quickly discovered our mutual interest in auxin transport and started a very fruitful collaboration on this topic”, Bjørn elaborates, “After this, it still took my group four years to develop a biochemical sample that was good enough to provide data, and this was the concentrated effort of two excellent postdocs in the lab, initially Mikael Winkler and later Kien Lam Ung. This project is a nice example of an old tenet in our research field, “Junk in – Junk out.”

Once the group managed to create a good quality sample, progress was fast and furious. Within a year, all the data was collected and the manuscript was written and submitted. The review process was equally fast, taking four months from initial submission to final acceptance.

“Getting these results felt almost like we had found a missing puzzle piece that people have been  looking for for a century. It is one of those results you just want to share as soon as you can”, says Kien Lam Ung, one of the two shared first-authors on the paper, “It has been a wild ride. We couldn’t have done it without the support of so many people, not to mention the EMBION microscopes where we gained access with short notice after an expedited fast-track application. We learned a lot in the process.”

The group of Bjørn Panyella Pedersen specializes in understanding proton-driven transport processes across cell membranes, and their work is often highly relevant for the plant physiology field.