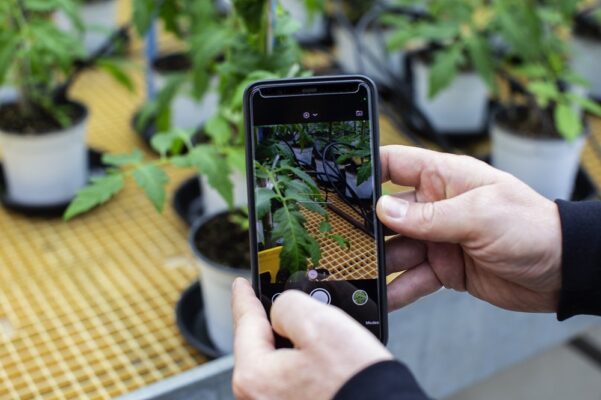 Doctor X Nabat is the name of an application for the early detection of diseases and pests in horticultural crops, developed by the members of the research group on Plant Phenomics, belonging to the UB and Agrotecnio (CERCA centre affiliated at the University of Lleida), together with the International Centre for Biosaline Agriculture (ICBA) in Dubai (United Arab Emirates).

This tool, aimed at farmers and agriculture experts, is available for devices with Android systems and computers. The application uses an ODK Collect form and, through a photograph uploaded by the user, is able to scan how much the plant is affected, and provides an efficient response with the treatment it needs. Doctor X Nabat has been tested in tomato, pepper and cucumber crops in Egypt, Tunis and the United Arab Emirates, and it is now being developed to be used in other crops in Mediterranean areas.

According to the Food and Agriculture Organization of the United Nations (FAO), annual losses of crops due to biotic stress, such as diseases and pests, oscillate between the 20 and 40%. In addition, abiotic stresses can cause damage to crops, such as droughts, salinity or nutritional deficiencies. These damages undermine the rural lifestyle, the national economy and food safety.

For this reason, Doctor X Nabat, which results from a 2-year joint research project, has focused on providing an early response in order to prevent the loss of crops and reduce the need to use phytosanitary intensive applications. “Artificial intelligence offers many possibilities in agriculture, and one of these is the creation of applications like this one, which we offer to the farmers in order to help them deal with the losses”, notes the principal researcher of the research group on Plant Phenomics, Josep Lluís Araus, professor at the Department of Evolutionary Biology, Ecology and Environmental Sciences of the Faculty of Biology of the UB.

The project uses deep learning technology to increase the speed and efficiency of the mechanisms that build the application. According to one of the drivers of the project, Shawn Carlisle Kefauver, member of Plant Phenomics, “deep learning allows us to accelerate the functioning of the application so that the farmer receives a quick response after uploading the image of the disease, it takes ten seconds”. The algorithm of Doctor X Nabat —and its website format, DoctorXUB.com— has been developed with more than 25,000 photographs of different diseases, abiotic stresses and nutritional deficiencies that have been uploaded by the research staff of the project and its collaborators.

When using Doctor X Nabat, the farmer takes a picture of an affected plant from the crops. The, the application makes a precise diagnosis indicating a percentage of probability which shows the disease or pest it has and how it can be treated. The phytosanitary treatment offered as a solution is one of the accepted ones by the EU standards.

Doctor X Nabat is available in English and a new version under development will include French and Arabian. The last version, now under beta version, will provide a solution to remove pests with ecological fertilizers. To share information about the application among the public and developing countries of the Mediterranean area, during 2022, the research teams of the UB, Agrotecnio and ICBA will organize training activities aimed at farmers about this application.

Image: Doctor X Nabat is an application to identify, by means of a photograph, the early appearance of diseases and pests in plants and reduce the loss of crops. Credit: Universitat de Barcelona