It is a well known fact that biologists are a clever bunch. Most of the time they’re out applying their intellect and tackling the world’s problems, but occasionally (probably at happy hour on a Friday evening) they sit around coming up with witty names for genes.

Drosophila (fruit fly) geneticists have some classics, including the tinman mutant (which lacks a heart), Smaug (represses the ‘dwarves’ – Nanos), and the tribbles mutant (which has out of control cell division – don’t add water!).

Don’t worry though – plant scientists have come up with some clever gene names of their own! I asked the #plantsci community on Twitter for their favorites:

We all know that #plantsci-entists make the best comedians. Anyone got a favourite funny gene name? I like SUPERMAN and KRYPTONITE

The superman mutant in Arabidopsis lacks the female parts of the flower, replacing it with more stamens. Fairly funny on its own, but naming its suppressor KRYPTONITE was even better!

@JoseSci KOJAK and WEREWOLF are two of my favourites — Jenny Mortimer (@Jenny_Mortimer1) March 31, 2016

Like the 1970s TV cop Kojak, the kojak mutant is completely (root) hairless! In contrast, the werewolf  mutant produces LOTS of root hairs. 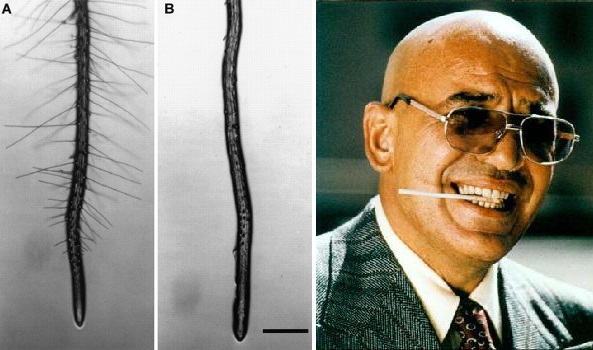 Ah yes, we can partially blame GPC’s Ruth Bastow for this one as she was co-first author on the discovery paper! TIMING OF CAB EXPRESSION1 (TOC1) had been shown to be involved in the circadian clock, and when Ruth and her colleagues discovered a gene that appeared to regulate TOC1, they named it TIC for the clever TIC-TOC of the circadian clock, then fit the full name (TIME FOR COFFEE) around it! The official reason was, “We located TIC function to the mid to late subjective night, a phase at which any human activity often requires coffee”. Hmm!

My thesis is on stomatal development, so these are close to my heart! The word ‘stoma’ is  ancient Greek for ‘mouth’, so lots of stomata genes are mouth-based puns!

Where does YODA fit into this, you ask? This gene is the (Jedi) master regulator of stomatal development, of course! 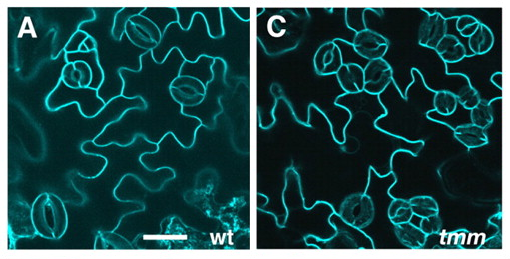 The too many mouths mutant produces too many stomata. Image credit: Guseman et al., 2010.

In the run-up to the Brexit referendum on the United Kingdom leaving the European Union, SCHENGEN is a topical choice! This gene is involved in establishing the Casparian Strip, a lignified type of cell wall located in the endodermis. The schengen mutants don’t form this barrier, so were named after the Schengen Agreement that ‘established a borderless area between European member states’.

Lisa’s spot on with these. The pennywise mutation was discovered first, named after a band, then when a paralogous gene was identified by the same authors, they continued the finance theme with POUND-FOOLISH.

The armadillo mutant in Drosophila has abnormal segment development, which looks a little like the armor plating of an armadillo. This protein contains ‘Armadillo repeats’, which is actually found in a huge variety of species including plants. The ARABIDILLO genes in Arabidopsis promote lateral root development, while PHYSCODILLO genes affect early development in the moss Physcomitrella patens.

.@JoseSci Not meant to be funny, but ARFs, because of their onomatopoetic nature are funny. — Ian Street (@IHStreet) April 5, 2016

Thanks to everyone who participated in this list. If you have a favorite whimsical gene name that hasn’t been mentioned, let us know in the comment section!