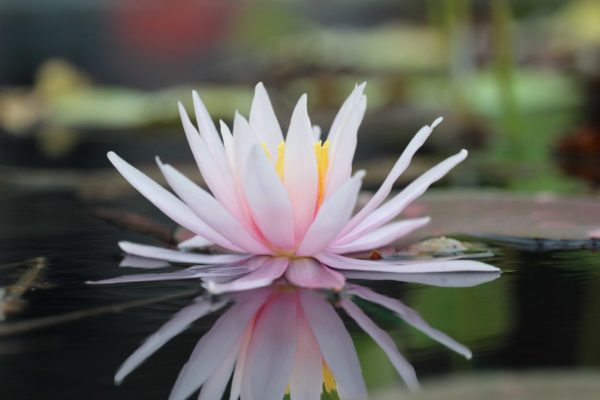 The Delicate Water Lily: A Rose by Another Name?

A new study published in Nature reports the 409-megabase genome sequence of the blue-petal water lily (Nymphaea colorata). The conclusion of the 47 coauthors is that although a rose is a rose, most flowering plants may owe their success, including employing floral scent for attracting pollinators, in part to the genetic innovations observed in the delicate water lily.

Known the world over, water lilies are beloved features in ponds and a frequent subject in art from paintings to sculptures. Some religions consider them symbolic of life.  Those beliefs may not be too far from the mark. The study’s authors analyzed the genes of Nymphaeales, the order of flowering water plants that includes water lilies, and their results point to Nymphaeales as one of two sister lineages to all other flowering plants, possibly due to a whole genome duplication event some 147 – 185 million years ago. The other lineage is Amborellales, an order of flowering shrubs that includes only one species, Amborella trichopoda.

Flowering plants, also known as angiosperms, are the most diverse group of land plants, with 64 orders, 416 families, approximately 13,000 known genera and 300,000 known species.

The international coalition of researchers that collaborated on the study includes Feng Chen, a professor of plant sciences in the University of Tennessee Institute of Agriculture, his colleague Xinlu Chen and doctoral student Chi Zhang from the same department, and doctoral student Qidong Jia of the Genome Science and Technology Graduate program at UT. Feng Che is an adjunct member of the faculty for that program. Coauthors also include another scientist named Chen—Fei Chen—who is from Nanjing Agricultural University (NAU), China, to which UTIA’s Chen is also an adjunct faculty through the Center of Agricultural Plant Biology established by UT and NAU in 2017. “This paper demonstrates the importance of multidisciplinary collaborations”, says UTIA’s Chen. He is among the six supervising collaborators for the entire project.

The UT group contributed to the analysis of the genetic basis of floral scent biosynthesis in water lilies. “Floral scent for attracting pollinators is critical for both the diversity of plants and plant-based agricultural production,” says Chen. According to the USDA Natural Resource Conservation Service, three-fourths of the world’s flowering plants and about 35 percent of the world’s food crops depend on animal pollinators, including insects, to reproduce. Many of those pollinators rely on floral scent to help them locate a plant’s flowers. “The flowers of A. trichopoda are scentless”, according to Chen, who was a coauthor of a Science article reporting the genome of A. trichopoda in 2013. “It is therefore intriguing to understand when and how flowering plants evolved scent,” he says.

The study explains that among the genes retained from the Nymphaeales’ whole-genome duplication event are homologues of genes that regulate flowering transition and flower development in all flowering plants. Specifically, the UTIA group studied N. colorata.

“Water lilies have evolved attractive floral scents and colors, which are features shared with core angiosperms,” said Chen. “The chemical compounds and biosynthetic genes we analyzed—those that produce the floral scents—suggest that the scents of water lilies have evolved in parallel to those in core angiosperms. Because of its unique phylogenetic position, the innovations in scent biosynthesis and other traits revealed from the N. colorata genome shed light on the early evolution of all angiosperms.”