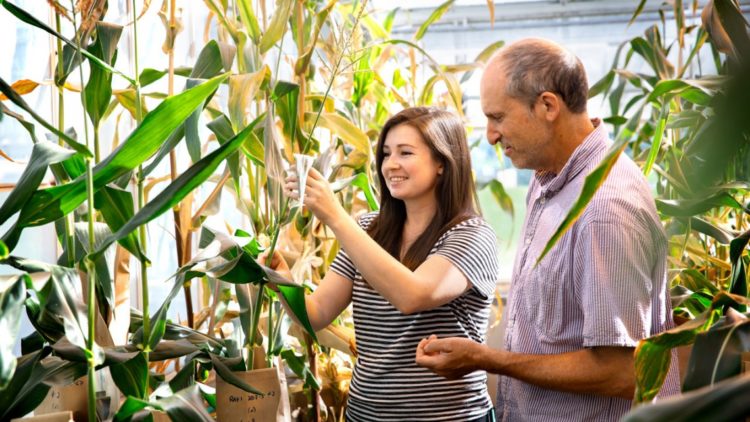 Nearly everyone on Earth is familiar with corn. Literally.

Around the world, each person eats an average of 70 pounds of the grain each year, with even more grown for animal feed and biofuel. And as the global population continues to boom, increasing the amount of food grown on the same amount of land becomes increasingly important.

One potential solution is to develop crops that perform better in cold temperatures. Many people aren’t aware that corn is a tropical plant, which makes it extremely sensitive to cold weather. This trait is problematic in temperate climates where the growing season averages only 4 or 5 months – and where more than 60% of its 1.6 trillion pound annual production occurs.

A chilling-tolerant strain could broaden the latitudes in which the crop could be grown, as well as enable current farmers to increase productivity.

A group of researchers led by David Stern, president of the Boyce Thompson Institute, have taken a step closer to this goal by developing a new type of corn that recovers much more quickly after a cold snap. Stern is also an adjunct professor of plant biology in Cornell University’s College of Agriculture and Life Sciences.

The research is described in a paper published online in Plant Biotechnology Journal.

“In the field, chilling stress happens most often in the spring when cold temperatures combine with strong sunlight, causing plants to bleach,” Stern said. “So a more chilling-tolerant corn could help farmers plant earlier in the year with confidence that their crop would survive a cold spell and bounce back quickly once the weather warmed up again.”

This work built on research published in 2018, which showed that increasing levels of an enzyme called Rubisco led to bigger and faster-maturing plants. Rubisco is essential for plants to turn atmospheric carbon dioxide into sugar, and its levels in corn leaves decrease dramatically in cold weather.

“The corn with more Rubisco performed better than regular corn before, during and after chilling,” said Coralie Salesse-Smith, the paper’s first author. “In essence, we were able to reduce the severity of chilling stress and allow for a more rapid recovery.” Salesse-Smith was a Cornell PhD candidate in Stern’s lab during the study, and she is now a postdoctoral researcher at the University of Illinois.

Indeed, compared to regular corn, the engineered corn had higher photosynthesis rates throughout the experiment, and recovered more quickly from the chilling stress with less damage to the molecules that perform the light-dependent reactions of photosynthesis.

The end result was a plant that grew taller and developed mature ears of corn more quickly following a cold spell.

Steve Reiners, a co-team leader for Cornell Cooperative Extension’s vegetable program, says that sweet corn is a major vegetable crop in New York, worth about $40-$60 million annually. He notes that many New York corn growers plant as soon as they can because an early crop commands the highest prices of the season.

“Many corn growers in New York plant early under protective plastic sheets to increase soil temperatures, which is expensive. Chilling-tolerant corn could allow farmers to remove that plastic sooner,” Reiners said. “This would expose the plants to additional sunlight, potentially enabling them to mature earlier in the season and get farmers those higher prices.”

Reiners, who was not involved in the study, is also a professor of horticulture at Cornell.

“The corn we developed isn’t yet completely optimized for chilling tolerance, so we are planning the next generation of modifications,” said Stern. “For example, it would be very interesting to add a chilling-tolerant version of a protein called PPDK into the corn and see if it performs even better.”

The researchers believe their approach could also be used in other crops that use the C4 photosynthetic pathway to fix carbon, such as sugar cane and sorghum.

Co-authors on the paper include researchers from The Australian National University in Canberra.