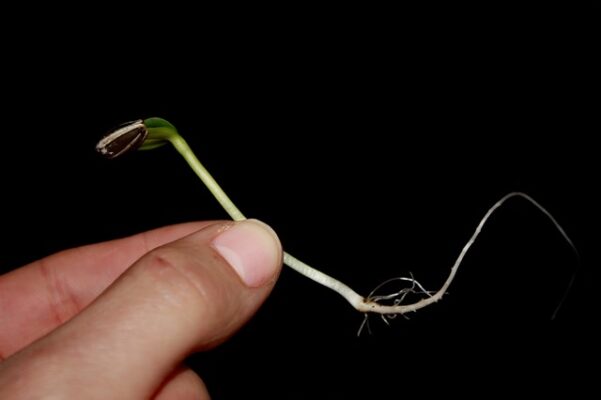 The molecular mechanisms behind the germination seeds are still a mystery. However, advanced molecular tools such as transcriptomics, proteomics, and metabolomics have added significant information. This short communication is a brief introduction of said revealed mechanisms.

Between the journey of seed development to germination, there is an adaptive trait called seed dormancy which is broken with the imbibition of water. Germination of the seed completes into three distinctive phases (Fig 1):

Phase I is distinguished by the rapid water uptake of a dry seed, which causes swelling and changes seed shape. The fast rehydration disrupts the membrane structure, causing leakage of low molecular weight metabolites and other cellular compounds; however, the membrane structure is repaired after a short period of hydration. Several physio-molecular processes are initiated during this phase, including protein synthesis and the resumption of respiratory activities, observed by a significant increase in oxygen consumption and carbon dioxide release. Water uptake during Phase I is also associated with DNA repair, which is damaged during the dormancy. DNA ligase, activated following imbibition, is involved to bind together broken pieces of DNA. With the progress of Phase I, repair of existing mitochondria also begins. Dry seeds contain low amounts of adenosine triphosphate (ATP), and mitochondrial repair during imbibition aids in the production of ATP required for the germination process.

When the rate of seed water uptake slows and water content becomes stable, the germinating seed enters Phase II. Several events occur during this phase, including the continuation of existing DNA and mitochondrial repair, synthesis of new mitochondria, and the synthesis of proteins. Also, other activities are taken place during this phase as the beginning of embryo expansion and the weakening of seed covering layers. The end of Phase II and the start of Phase III are marked by radicle protrusion through the testa/seed coat.

The mobilization of storage reserves deposited in storage organs, such as the endosperm in cereals, characterizes Phase III; this causes further increases in water uptake, which is followed by seedling growth. During the third phase, cell division, DNA synthesis, and radicle cells elongation take place.

Transcriptomic and proteomic analyses of imbibing seeds have provided important insights into the physiological processes and molecular functions underlying seed germination. During germination, a transcriptomic analysis of barley seeds reveals transient upregulation of cell wall synthesis genes. Regulatory components such as transcription factors, signalling, and post-transcriptional components are transiently up regulated during the early germination phase, whereas the late germination phase is characterized by transcriptional activation of genes representing the histone families and many metabolic pathways such as amino acid metabolism, nucleotide metabolism, and those related to cell division and cell cycle. The post-germination phase is characterized by the induction of genes involved in photosynthesis and reserve mobilization.

Genes involved in stress-related pathways and seed storage proteins, on the other hand, are suppressed throughout the germination process. Proteomic analysis of germinating barley seeds revealed that the expression of the embryonic β-type proteasome, heat shock, desiccation stress, and ABA-induced proteins increases during imbibition begin but decreases as imbibition in progress. This suggests that germination programming begins during the seed maturation phase. Redox-related proteins, such as ascorbate peroxidase, and enzymes involved in the degradation of storage reserves, such as α-amylase, appeared to exhibit up-regulation as imbibition progressed, whereas the expression of other proteins, such as those representing glycolysis enzymes, is evident throughout the entire germination process, likely providing the energy required to support the growing embryo.

Phytohormones play an important role in activating germination. GA and ABA are two of the most important hormones that play central and antagonistic roles in seed germination regulation, with GA promoting and ABA inhibiting activities. Transcriptomic analysis of Arabidopsis seeds revealed that mRNA of the upstream GA biosynthetic gene ent-kaurene oxidase (AtKO1) is increased during the first phase of seed germination (imbibition). The expression of the gene encoding ABA 8’-hydroxylase, which catalyse the conversion of ABA into inactive form and release the seed dormancy is also observed during Phase I of germinatingArabidopsis seeds.

The latest tools of bioinformatics have revealed important gene families and their role in germination. The Gibberellic Acid-Stimulated Regulator (GASR) genes, also known as GASA and GAST, are a cluster of GA-responsive genes that play important role in germinating seeds of several plants. Following the discovery of the GAST gene (GAST1) in tomato (Solanum lycopersicon), numerous GAST1 homologs have been discovered in other plant species, such as AtGASA in Arabidopsis, OsGASR in rice (Oryza sativa), StSN in potato (Solanum tuberosum), ZmGSL in maize (Zea mays), GEG in gerbera (Gerbera hybrida), FaGAST in strawberry (Petunia hybrida) (Cheng et al., 2019).

Research has shown that seed germination is controlled by a complex signalling and gene expression regulation network. Plants may share similar molecular mechanisms, such as phytohormone behaviour, transcription and translation activation, and the process of radicle protrusion, among others. However, different plant species have distinct mechanisms, particularly for reserve mobilization and metabolism activation.