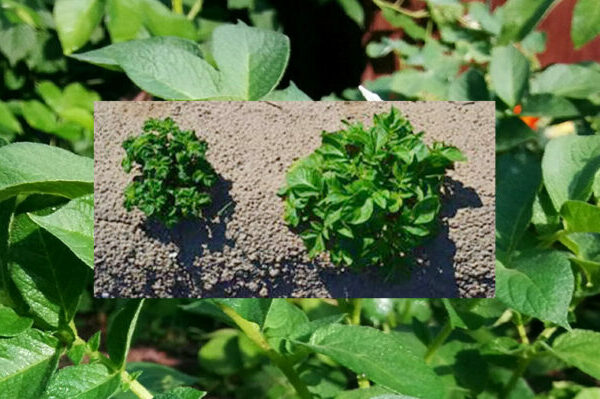 Plant vir­uses hi­jack the de­fence sys­tem of plants, but re­search­ers may be able to find a way to strike back

Many diseases caused by common plant viruses reduce the crops of important food plants. In the worst case, potato viruses, among others, can destroy as much as 80% of crops on infected fields.

Plants are not entirely defenceless against viruses, although they lack an immune system like the one found in humans. For plant cells, the primary defence mechanism against viral infections is gene silencing. By utilising the mechanism, plant cells identify the foreign genetic material originating in the virus and cut it up into small pieces.

“In turn, these bits of the genome guide plant cell proteins to identify and destroy viral genomes. As a result, the production of viral proteins ends, which is interpreted as ‘silencing’ of the viral genes. A successful defensive response prevents the virus from spreading in the plant,” says Docent Kristiina Mäkinen from the Faculty of Agriculture and Forestry, University of Helsinki.

At the same time, viruses too have means with which to resist and subvert the host plant’s defence mechanisms. A research group specialised in plant virology, led by Mäkinen, investigates the interaction between potato virus A and host plant proteins. Mäkinen and her group find one viral protein particularly interesting, as it is directed against the plant’s defence system.

“This protein is able to not only block gene silencing, but also to harness the factors involved in the process to serve both its viral replication and the formation of new viral particles. In other words, the virus forces, as it were, the plant’s defence system to go against its intended purpose, in favour of the pathogen.”

Studies on plants that are naturally resistant to viruses have shown that their resistance is often based on mutations in the plant’s genome that block interaction between viral and plant proteins. To employ these mutations in plant breeding, University Researcher Maija Pollari considers it necessary to start utilising modern plant breeding techniques.

“For instance, the CRISPR/Cas9 technique, which was just awarded the Nobel Prize in Chemistry, makes it possible to target anti-viral mutations in a precise location in the plant genome. This is a great stride forward compared to traditional plant breeding, which relies on the use of mutagenic chemicals and radioactive radiation,” Pollari adds.

The interactions between plant and viral proteins discovered by Kristiina Mäkinen’s research group offer new targets for breeding resistance against the potato virus in host plants. The researchers’ aim is to identify a component in the plant proteins through which they come into contact with viral proteins.

“When proteins are modified so that the interaction is blocked, the plant’s gene silencing mechanism may regain the upper hand over the virus. Strains resistant to viruses used in cultivation reduce losses caused by viral diseases and, consequently, improve yields. Furthermore, it’s likely that the chemical burden of the environment is alleviated, as the amount of chemicals used in preventing aphids is reduced,” notes Kristiina Mäkinen.

Image credit: Potato viruses can seriously reduce the crops. In the small picture on the left is a potato plant infected with potato virus Y. On the right is a healthy potato. Credit: DR.BANGEMANN, SAKA PFLANZENZUCHT