The first genetically modified (GM) crops were approved for commercial use in 1994, and GM crops are now grown on over 180 million hectares across 29 countries. The most used forms of genetic modification are systems that result in herbicide resistance or expression of the Bt toxin in maize and cotton to provide protection against pests such as the European corn borer. These systems both require few novel genes to be introduced to the plant, and allow more efficient use of herbicides and pesticides, both of which are harmful to the environment and human health. Current systems of genetic modification usually involve 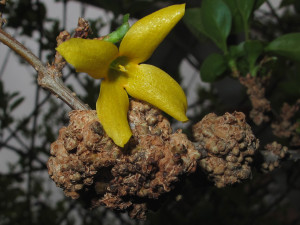 Agrobacterium tumefaciens is used to genetically engineer plants in the lab. In nature this bacteria uses its ability to alter plant DNA to cause tumours. Image by Jacinta Lluch Valero used under Creative Commons 2.0.

the use of Agrobacterium vectors, direct transformation by DNA uptake into the plant protoplast, or bombardment with gold particles covered in DNA. However, current systems of transformation are far from perfect. Many beneficial traits such as disease resistance require stacking of multiple genes, something that is difficult with current transformation systems. Furthermore, it is essential that transgenes are positioned correctly within the host genome. Current systems of genetic modification can insert genes into the ‘wrong’ place, disrupting function of endogenous genes or having implications for down or upstream processes. An additional problem is that transfer of transgenes from one line to another requires several generations of backcrossing. However, the past two decades have seen great developments in microbiology. Many new tools and resources are now available that could greatly enhance the biotechnology of the future.

Many new and emerging technologies are now available that could transform plant genetic engineering. For example, high throughput sequencing and the wide availability of bioinformatics tools now make identifying target genes and traits easier than ever. Technologies such as site-specific recombination (SSR) and genome editing allow specific regions of the genome to be precisely targeted in order to add or remove genes. Artificial chromosome technology is also part of this emerging group that could be of benefit to plant science. Synthetic chromosomes have already been used in yeast, and widely studied in mammalian systems due to their potential use in gene therapy. Although there have so far been no definitive examples in plants, work has been done in maize that shows the potential of the technology for use in GM crops.

A minichromosomes is a small, synthetic chromosome with no genes of its own. It can be programmed to express any desirable DNA sequence that could encode for one, or a number, of genes. An ideal minichromosome would be small and only contain essential elements such as a centromere, telomeres and origin of replication. Once introduced into the plant the minichromosomes should be designed such that interference with host growth and development is minimal. A key requirement is that the chromosome is stable during both meiosis and mitosis. This would ensure introduced genes do not become disrupted or mutated during cell division and reproduction. Gene expression would therefore remain the same for many generations. Finally, the DNA sequence on the minichromosomes could be designed such that it is amenable to SSR or gene editing systems. This would allow re-design and addition of new traits further down the line.

Plant artificial chromosomes (PACs) have many advantages over traditional transformation systems. For example, to confer complex traits such as disease resistance and tolerance to abiotic stresses such as heat and drought, multiple genes are required. This is not easy with current methods of modification. 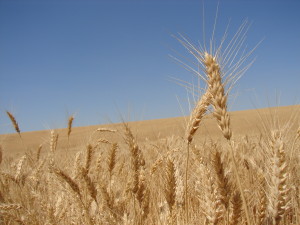 PACs could offer a new way to introduce beneficial traits to our crops plants and feed a growing population.Image by Seattle.Romer. Used under Creative Commons 2.0.

However, PACs allow an almost unlimited number of genes to be integrated into the host system. A further possibility that comes from being able to add multiple genes is the addition of new metabolic pathways into the plant. This could allow us to change the nutrients produced by a plant to benefit our diets. Additionally, in a contained environment, plants could be used as a cheap, sustainable way to produce pharmaceuticals. A second major benefit of PACs is that they avoid linkage drag. This is when a desirable gene is closely linked to a deleterious gene that acts to reduce plant fitness. Where this linkage is very tight even repeated backcrossing cannot separate out the genes. Design of new DNA sequences completely avoids this problem, and could allow us to select out detrimental traits from out crop plants.

Emerging technologies pose new questions to policy makers regarding GM regulation. For example, the use of genome editing, whereby specific sites in the genome are targeted and modified, produces an end product with a phenotype almost identical to one that could be achieved through conventional breeding. This sets genome-edited crops apart from other transgene-containing GM material. For this reason many now argue that genome-edited crops ought not to come under current GM regulations. Much of this argument centres on whether or not to regulate the scientific technique used to produce a crop, or to regulate the end product in the field. For more information on genome editing including current regulations and consensus, see the links at the end of this article.

PACs pose a different set of problems entirely. Minichromosomes would be foreign bodies in the plant, and gene stacking within these introduces even more foreign genes than is possible with current technologies. This would require extensive assessment of both environmental and health effects prior to commercialization. Currently regulatory approval costs around $1-15 million per insertion into the genome. These heavy charges may discourage the further development of minichromosomes technology. However, with PACs it is possible that a particular package of genes could be assessed once, and then transferred into numerous cultivars. This would eliminate the requirement to individually engineer and test every cultivar, so perhaps saving time and money in the long term.

The regulatory status of genome-edited crops

A proposed regulatory network for genome edited crops in Nature

A recent workshop on the CRISPR-CAS system of genome editing was held in September 2015 by GARNet and OpenPlant at the John Innes Centre in Norwich, UK. You can read the full meeting report here.