Using plants to convert explosives to fertilizers: an interview with Neil Bruce 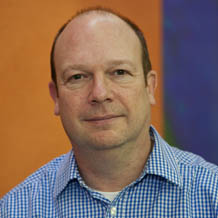 This week we spoke to Professor Neil Bruce, whose research at the University of York (UK) focuses on metabolic pathways. His insights into the detoxification of pollutants by plants and microorganisms has led to promising new solutions to help clean up polluting explosives from military testing.

Could you begin by telling us a little about your research interests?

I have very broad research interests that often revolve around finding enzymes for biotechnological applications. A particular focus of my lab is the biochemistry and molecular genetics of plant and microbial metabolism of xenobiotic (foreign) compounds, such as environmental pollutants. Elucidating these metabolic pathways often results in the discovery of new enzymes that catalyze interesting chemistries. Being a biologist at heart, I’m interested in the evolutionary origin of these enzymes, but also by studying their structure and function I’m exploring how these enzymes can be engineered to further improve their properties for a particular application, such as environmental remediation or biocatalysis.

You spoke at the GARNet 2016 meeting about engineering plants to remediate explosives pollution. Could you explain what this problem is and how it affects both people and the environment?

Explosive compounds used in munitions are highly toxic and the potential for progressive accumulation of such compounds in soil, plants, and groundwater is a significant concern at military sites. It is estimated that in the US alone, 10 million hectares of military land is contaminated with components of munitions. The explosives mainly used in artillery, mortars and bombs are 2,4,6-trinitrotoluene (TNT) and Composition B (containing TNT and hexahydro-1,3,5-trinitro-1,3,5-triazine (RDX)). The US Department of Defense estimated that the clean-up of unexploded ordnance, discarded military munitions and munition constituents on its active ranges would cost between $16 billion and $165 billion. Explosives pollution is, however, a global problem, with large amounts of land and groundwater contaminated by TNT and RDX, including polluted sites in the UK that date back to the First and Second World Wars. Explosives pollution will continue to be a pressing issue while there is a requirement for military to train and the existence of armed conflict requires munitions to be manufactured. There is an urgent need to develop sustainable in situ technologies to contain and treat these pollutants. 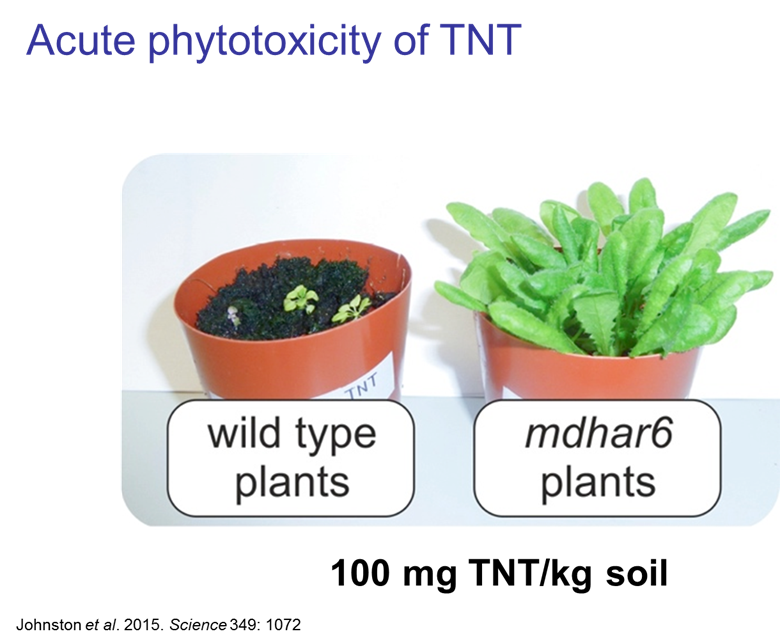 TNT is toxic to plants because of the actions of an enzyme called monodehydroascorbate reductase, which breaks TNT down into a toxic form. Plants lacking this enzyme, such as the mdhar6 mutant plants on the right, can grow very well on TNT-polluted soil. Credit: Johnston et al. (2015).

How did you develop the idea of using plants to remove explosives pollution? What benefits do plants have over the microorganisms from which the enzymes are obtained?

We have worked closely with the UK Ministry of Defence and US Army to understand the fate of explosives in the environment. Knowledge of their effects on biological systems is important, as this information can be used to support the management of contaminated sites. We have, therefore, been uncovering the molecular mechanisms behind these detoxification processes in plants, and have used this knowledge, in combination with studies on the bacterial degradation of pollutants, to successfully engineer transgenic plants able to remediate toxic explosive pollutants in a process called ‘phytoremediation’.

An innovative aspect of our work has been the use of genetic engineering to combine the biodegradative capabilities of explosives-degrading bacteria with the high biomass, stability and detoxification systems inherent in plants. While it is possible to find explosives-degrading bacteria on polluted land, they do not degrade the explosives fast enough to prevent leaching into the groundwater. Our engineered transgenic plant systems, however, can efficiently remove toxic levels of TNT and RDX from contaminated soil and water.

You mentioned that you are currently testing transgenic switchgrass to remove RDX and TNT pollution in the US. Why did you choose this species and have you considered developing other species suited to different environments?

Plants appropriate for the phytoremediation of explosives need to be adaptable to conditions on military ranges, for example, they need good fire tolerance, and to be able to grow over a wide geographical range. Switchgrass meets these criteria, and is also deep-rooting, can be grown on marginal lands, and researchers can benefit from established methods for genetically engineering switchgrass. We have also been engineering other grass species and have considered fast-growing deep-rooting trees such as poplar. 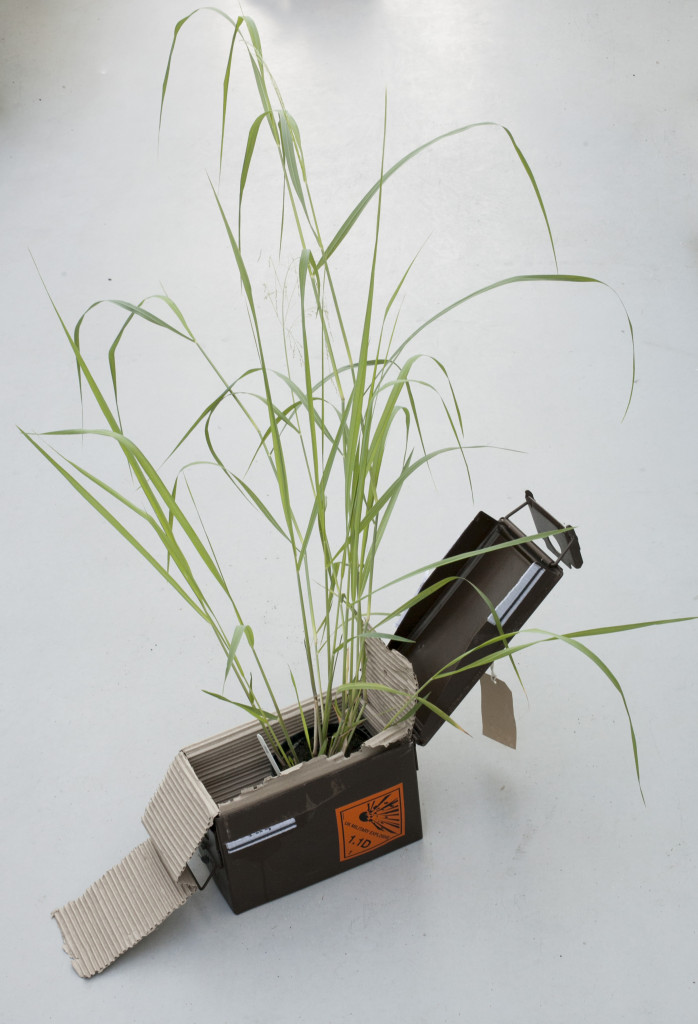 How quickly can engineered plants remove this pollution?

In the lab these plants can remove levels of explosives pollution found in the environment within a matter of days. We are currently carrying out field trials with our transgenic plants on a military site in the US, to observe their phytoremediation effectiveness in the real world. If these trials are successful, a number of demonstration studies on contaminated sites will be required to convince end users of the benefits of phytoremediation for remediating and maintaining military land. These demonstration studies will also allow us to evaluate any risks, which will be important to obtain further approval from the US Department of Agriculture to be able to use these plants on a larger scale.

What other projects are you working on? Could you elaborate on any recent discoveries?

As well as explosives, we are also working on the use of plants to extract platinum group metals (PGMs) from mining waste. PGMs are used in an ever-expanding array of technologies and demand is spiralling upwards; however, these are rare and expensive to mine. It is essential that these metal reserves are utilized and recycled responsibly, not dispersed and lost into the environment. Plants can take up metals from their environment and, in the case of PGMs, can deposit them as nanoparticles within their tissues. Importantly, we have recently shown that plants containing palladium nanoparticles can also be used to make efficient biocatalysts, and we are currently using synthetic biology in plants to improve palladium uptake and nanoparticle formation.

Be there or be square: nuclear-to-cytoplasm relocalization of Arabidopsis PRORP2 leads to virus resistance

Fruits and vegetables as key components of plant-based diet