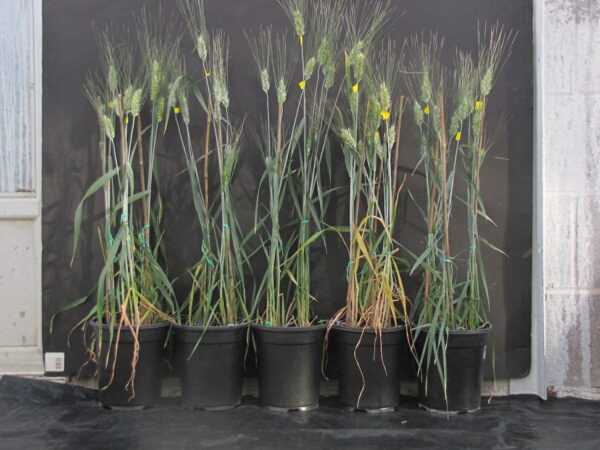 Researchers know how to make precise genetic changes within the genomes of crops, but the transformed cells often refuse to grow into plants. One team has devised a new solution.

Scientists who want to improve crops face a dilemma: it can be difficult to grow plants from cells after you’ve tweaked their genomes.

A new tool helps ease this process by coaxing the transformed cells, including those modified with the gene-editing system CRISPR-Cas9, to regenerate new plants. Howard Hughes Medical Institute Research Specialist Juan M. Debernardi and Investigator Jorge Dubcovsky, together with David Tricoli at the University of California, Davis Plant Transformation Facility, Javier Palatnik from Argentina, and colleagues at the John Innes Centre, collaborated on the work. The team reports the technology, developed in wheat and tested in other crops, in the journal Nature Biotechnology.

“The problem is that transforming a plant is still an art,” Dubcovsky says. The success rate is often low – depending on the crop being modified, 100 attempts may yield only a handful of green shoots that can turn into full-grown plants. The rest fail to produce new plants and die. Now, however, “we have reduced this barrier,” says Dubcovsky, a plant geneticist at UC Davis. Using two genes that already control development in many plants, his team dramatically increased the formation of shoots in modified wheat, rice, citrus, and other crops.

Although UC Davis has a pending patent for commercial applications, Dubcovsky says the technique is available to any researcher who wants to use it for research, at no charge. A number of plant breeding companies have also expressed interested in licensing it. “Now people are trying it in multiple crops,” he says.

Humans have worked to improve plants since the dawn of agriculture, selecting wild grasses to produce cultivated maize and wheat, for example. Nowadays, though, CRISPR has given researchers the ability to make changes to the genome with surgical precision. They have used it to create wheat plants with larger grains, generate resistance to fungal infection, design novel tomato plant architectures, and engineer other traits in new plant varieties.

But the process isn’t easy. Scientists start out with plant cells or pieces of tissue, into which they introduce the CRISPR machinery and a small guide to the specific genes they’d like to edit. They must then entice the modified cells into forming a young plant. Most don’t sprout – a problem scientists are still working to understand.

They have tried to find work-arounds, including boosting the expression of certain genes that control early stages of plant development. While this approach has had some success, it can lead to twisted, stunted, sterile plants if not managed properly.

Dubcovsky and his colleagues looked at two other growth-promoting genes, GRF and GIF, that work together in young tissues or organs of plants ranging from moss to fruit trees. The team put these genes side-by-side, like a couple holding hands, before adding them to plant cells. “If you go to a dance, you need to find your partner,” Dubcovsky says. “Here, you are tied with a rope to your partner.”

Dubcovsky’s team found that genetically altered wheat, rice, hybrid orange, and other crops produced many more shoots if those experiments included the linked GRF and GIF genes. In experiments with one variety of wheat, the appearance of shoots increased nearly eight-fold. The number of shoots in rice and the hybrid orange, meanwhile, more than doubled and quadrupled, respectively. What’s more, these shoots grew into healthy plants capable of reproducing on their own, with none of the defects that can result when scientists boost other development-controlling genes. That’s because one of the genes is naturally degraded in adult tissues, Dubcovsky says.

Caroline Roper, a plant pathologist at University of California, Riverside who was not involved in the work, plans to use the new technology to study citrus greening, a bacterial disease that kills trees and renders oranges hard and bitter.

To understand how citrus trees can protect themselves, she needs to see how removing certain genes alters their susceptibility to the bacterium — information that could lead to ways to fight the disease. With conventional techniques, it could take at least two years to generate the gene-edited plants she needs. She hopes Dubcovsky’s tool will shorten that timeline.

“Time is of the essence. The growers, they wanted an answer yesterday, because they’re at the brink of having to abandon cultivating citrus,” she says.