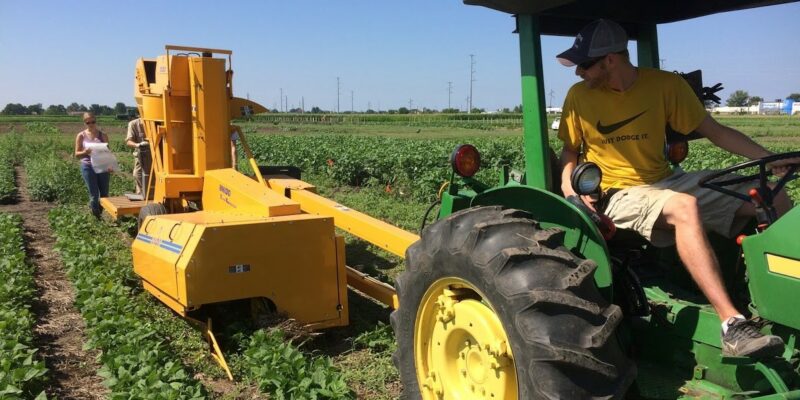 Cover crops such as cereal rye reduce weed competition in grain soybean, but most vegetable legume growers have yet to adopt the practice due to the potential for reduced germination and yield in thick cover crop residue. However, a new study from the University of Illinois and USDA Agricultural Research Service (USDA-ARS) shows early-terminated rye could be a promising part of an integrated weed management program for some vegetable legumes, including edamame.

“In general, the more cover crop biomass you have, the better the weed suppression. We found a sweet spot in an earlier experiment with edamame when we terminated rye at tillering and then planted into the stubble. The rye provided measurable weed suppression without harming the crop,” says Marty Williams, USDA-ARS ecologist and affiliate professor in the Department of Crop Sciences at Illinois. “We wanted to follow that up with yield experiments for edamame, and decided to broaden to some mainstream vegetable legumes including snap bean and lima bean.”

Williams and his research team looked at weed density and biomass in bare soil and in plots planted with a rye cover crop terminated at tillering, about a month before vegetable crops were planted. For three growing seasons, the researchers either sprayed weeds with one of the few registered herbicides; hand-pulled weeds in addition to spraying; or left weeds alone to grow. Then they gathered information on weed suppression, crop establishment and yield, as well as soil moisture and nitrogen.

In edamame and snap bean, early-terminated rye reduced weed biomass by 53% and 73%, respectively, compared with bare soil. And, consistent with his earlier studies, Williams found no reductions in edamame establishment or yield. Yet, the results for snap bean and lima bean were not as rosy. Both lost yield when planted in rye residue, and weed density and biomass actually increased for lima bean, compared with bare soil.

“We found the early-terminated rye system worked well in edamame. The rye suppressed weed biomass without impacting the crop.” Williams says. “For lima bean, the system failed. For snap bean, there is room for improvement.”

He suspects the poor performance in lima and snap bean is related to the crops’ weak ability to fix nitrogen in soils depleted of the nutrient by the cover crop. In turn, poor crop growth and canopy development favored the weeds.

“We had a problem with crop establishment in lima bean in the rye stubble,” Williams says. “And while snap bean established well, crop growth was hampered by the nitrogen-starved environment in rye stubble – one of the key traits providing weed suppression.”

Edamame, like soybean, can grow without applied nitrogen because it benefits from symbiosis with nitrogen-fixing bacteria. Williams’ group is currently doing follow-up research to exploit biological nitrogen fixation in snap bean, which would have implications beyond weed management.

Although early-terminated rye worked well in edamame, the cover crop didn’t eliminate the need for other weed control measures.

“Early-terminated rye alone is not going to solve all weed problems,” Williams says. “It reduced the weed load, but did not eliminate it. Early-terminated rye roughly halved the weeds compared to bare soil. The weed load was further reduced by using an herbicide, too. Hand-weeding, while generally used as a last-resort tactic, was used in this system to entirely eliminate interference with the crop and weed seedbank additions. That combination is the most effective approach.”