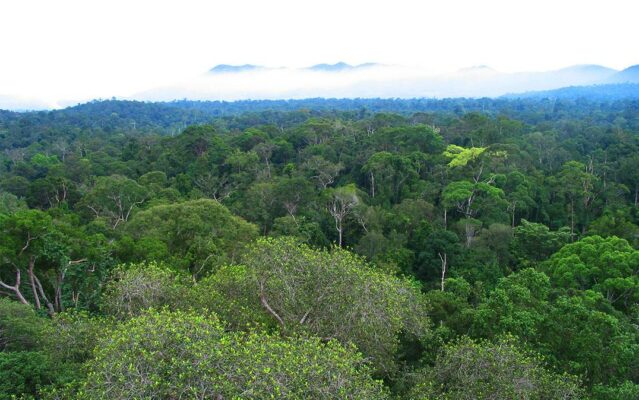 Into the Woods: Genetics of Rainforest Tree Reveal Its Past and Possible Future

For most people who go for a walk in a forest, their surroundings seem unchanging. But researchers from Japan have discovered that, on a geological time scale, one rainforest tree species has been getting up to all sorts of antics.

In a study published this month in Tree Genetics & Genomes, researchers from the University of Tsukuba have revealed that a tropical rainforest tree species underwent a recent and rapid population expansion in Borneo, showing that an understanding of a species’ past is important for ensuring its future.

Biodiversity loss is one of the most pressing problems of our time. Ecosystems such as tropical rainforests, which have high biodiversity and species richness, face ongoing threats from changing land use and over-exploitation by humans. To conserve the tree species living in these environments, it is important to understand their genetics and how their current genetic structures were established.

“We investigated the genetics of Shorea parvifolia, a widely distributed tropical forest tree in Southeast Asia,” says senior author of the study, Professor Yoshihiko Tsumura. “Its genetic structure has been affected by repeated glacial and interglacial fluctuations; these genetic changes provide key knowledge for sustainable use and conservation.”

S. parvifolia is important for ecosystem function and forestry in Southeast Asia. To examine its genetics, the researchers took leaf samples from trees in natural populations that covered almost the entire geographical range of S. parvifolia. The team used nuclear DNA markers and the DNA sequencing data of chloroplasts (the plant cell structures that carry out photosynthesis) to examine the genetic structure of S. parvifolia and how it was established.

“The nuclear DNA analysis of the genetic structure showed a clear separation between the Borneo populations and the others,” explains Professor Tsumura.

Although the genetic structure shown by the chloroplast DNA was less pronounced, further analysis showed important differences in the Borneo populations. The results indicated that S. parvifolia has had a recent population expansion in Borneo.

“The high genetic diversity at particular genetic markers in the Borneo samples suggest that during the most recent glacial period, populations of this species likely migrated from the Malay Peninsula to Borneo and then underwent a major population increase, amassing considerable genetic diversity,” says Professor Tsumura.

On the basis of the results of their study, the researchers have suggested that conservation units in this area be divided into three regions: the Malay Peninsula, Sumatra, and Borneo. The team’s findings also highlight the benefit of using locally sourced seeds for plantings aimed at improving conservation and sustainability in tropical forests of Southeast Asia, because doing so could maintain species’ genetic diversity.

Image: Researchers from the University of Tsukuba find that the genetic structure of a tree species in Southeast Asia shows a recent population expansion in Borneo, an important finding for conservation and sustainable use of tropical rainforest trees. Credit: University of Tsukuba