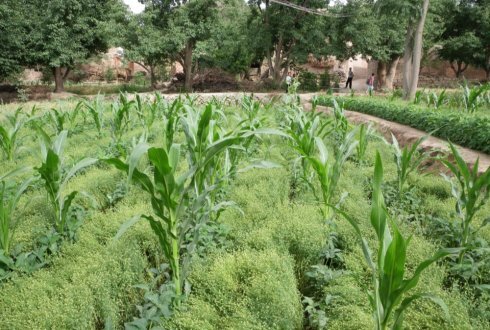 Intercropping increases agricultural yield while reducing the use of fertilisers

Intercropping, or the simultaneous cultivation of multiple crops on a single plot of land, can significantly increase the yield, not only of low input agriculture, but also of intensive agriculture, and reduce the use of fertilisers. Scientists of Wageningen University & Research (WUR) reached this conclusion in collaboration with colleagues from China. They published their results in Nature Plants.

Farmers have applied intercropping for as long as we can remember. The dominant idea was that this method provided benefits primarily in low-input agriculture and in areas where low-cost labour is available and fertilisers are expensive or unavailable, such as in parts of Africa, Asia and parts of Latin America. Through an extensive meta-analysis of 226 previously conducted experiments, WUR researchers and their colleagues of China Agricultural University, discovered that intercropping can contribute at least as much to a significantly higher yield of intensive agriculture, while lowering the use of fertiliser. If we are to feed the growing world population sustainably, these are opportunities we cannot afford to waste.

Intercropping appears to give a 16-29% larger yield per unit area than monocultures in intensive agriculture under the same circumstances, while using 19-36% less fertiliser when counted per unit product. The increase is most significant utilising a method of intercropping called “relay strip intercropping” that is frequently applied in China. This method combines crops whose growing season differs in strips that are one to 1.5 metres wide, with several rows of a crop species in each strip.

Wheat, barley and broad beans, for example, grow fast in spring, while corn – which is sown later – has the peak of its growth later in summer. Through these different growth periods, the available sunlight, water and nutrients on a field are used more effectively throughout the year than when monoculture is applied. Previous studies already showed that an added advantage of intercropping is that crops require less irrigation and pesticides to protect them from diseases and plagues.

‘There are still hurdles to take concerning, for example, the introduction of new and lighter agricultural machinery, acceptance by farmers and figuring out the most suitable species combinations, spatial configuration and management according to local growing conditions. But Chunjie Li’s research shows the great potential of intercropping, including its potential for sustainably increasing the yield of both low and high-input agriculture. If we are to feed the growing world population sustainably, these are opportunities we cannot afford to waste’, says co-supervisor and co-author Wopke van der Werf. Van der Werf is an associate professor for the WUR Centre for Crop Systems Analysis.

The results of the study were published in Nature Plants. The article is based on the dissertation of PhD candidate Chunjie Li. She will defend her thesis on Wednesday, 16 September.