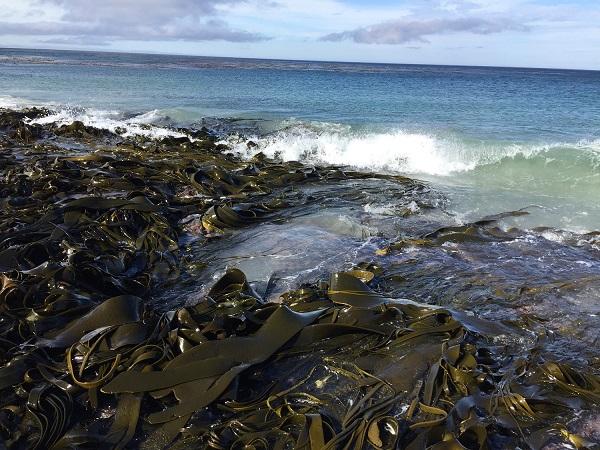 Drifting algae in the Austral Ocean can bring invasive species to the Antarctic coasts, according to a study published in the journal Scientific Reports. The new study describes the first scientific evidence of a potentially invasive and colonial species –the marine bryozoan Membranipora membranacea– which reaches the Antarctic latitude islands in macroalgae that drift in the marine environment.The new study on biodiversity in the Antarctic ecosystems is led by the lecturer Conxita Àvila, from the Faculty of Biology and the Biodiversity Research Institute (IRBio) of the University of Barcelona, and counts on the participation of the experts from the Institute of Marine Sciences (ICM-CSIC), the British Antarctic Survey (BAS) and the University of Hull (United Kingdom).

Passengers into the cold

Tourism, maritime transport and scientific research are some human activities that favoured the expansion of non-native organisms –insects, plants, etc.- in the fragile terrestrial ecosystems of the Antarctica. In these extreme habitats, the drifting of algae and plastics driven by the wind and marine currents can be natural mechanisms that favour the arrival of exotic organisms in the marine environment.

Now, the new article in Scientific Reports describes for the first time the arrival of organisms towards Antarctic latitudes through floating macroalgae coming from distant ecosystems in the marine environment. “Although this way of natural expansion was known in other natural ecosystems in the planet, in Antarctica, this phenomenon has taken a special scientific relevance as a potential mechanism to introduce new species in the Antarctic ecosystems”, notes the lecturer Conxita Àvila, from the Department of Evolutionary Biology, Ecology and Environmental Sciences and IRBio.

Bryozoans, molluscs, annelids, arthropods, echinoderms, cnidarians and sponges are some of the unexpected passengers that travelled thousands of kilometres on top of macroalgae that were driven by the wind and marine currents to the Antarctic and Subantarctic islands. With a laminated structure and large dimensions, these kelps –the species Macrocystis pyrifera and Durvillaea antarctica– build submarine forests and their ecological role is crucial in the marine ecosystems as a natural refuge for a wide range of organisms (algae, fish, molluscs, etc.).

Rafting to the South

As scientific news, the new study identified a potentially invasive species in the stranded algae in the Antarctic shore: the bryozoan Membranipora membranacea, a colonial organism believed to be from the northeast Pacific Ocean. According to researcher Blanca Figuerola (ICM-CSIC), “this species has never been previously reported from south of the Polar Front. Thus, it could have a big ecological impact on the biodiversity in Antarctica in the future. This species has a fast growth rate and could easily colonize a notable surface of kelp rafts, creating thick layers and making them more fragile. The colonies of M. membranacea limit the ability of algae to reproduce and grow and make them prone to break during storms, and this further facilitates the spread of the bryozoan”.

“Moreover –continues Figuerola– the encrusting colonies can settle on other surfaces (plastics, boats, etc.), and plankton larvae can be transported by ballast water and survive during months. All these factors would affect the environmental balance should the species settle in Antarctica”.

With global warming effects –higher temperatures and the fast ice melting in the planet- there are more and more sensitive areas to the arrival of non-native invasive species. These phenomena are especially worrying in areas such as the Antarctic Peninsula, where environmental conditions could favor the survival of the potentially invasive species.

“The Antarctic Peninsula is the most vulnerable area to the episodes of biological invasions through drifting waters. The geographical latitude, and closeness to terrestrial areas –South America, Scotia Arch islands, etc.- with potentially invasive species, the position of the coasts regarding the Antarctic Circumpolar Current, and the climate conditions are factors that would favor the arrival and colonizing success of non-native species carried by algae or plastics”, notes Àvila, head of the research projects Bluebio, Distantcom, Ecoquim and Actiquim, on the ecology of marine invertebrate communities in Antarctic waters.

The risk of invasion by non-native species is high in volcanic areas –such as Deception Island- since its environmental conditions are more favorable. However, any coastal area without ice could be a potential area for algae to arrive and distribute these organisms.

“In the context of a global change, what occurs in the Antarctic Peninsula could take place as well in other areas of the White Continent. Also, some non-native and generalist species could reach the Antarctic environment and adapt to the new environmental conditions. This could have dramatic effects on the local organisms of the marine ecosystems”, notes the researcher.

“The Antarctic is warming, presenting new opportunities, both caused by humans and natural, for animals and plants to enter Antarctic waters, changing the existing unique local communities forever. Our findings highlight how much easier than we previously thought it is for animals that have caused environmental damage elsewhere to reach the most extreme and remote continent on Earth. They are also a reminder that the ongoing work of scientists, in studying the biodiversity and ecology of the region, is vital in detecting these changes before these new species become established” concludes the expert Huw James Griffiths (British Antarctic Survey, BAS).

Today, biogeographical frontiers that limit Antarctica are not impenetrable anymore for many organisms. Some bryozoans can get over the polar front and the Antarctic Circumpolar Current, biogeographical frontiers in extreme latitudes in the Austral Ocean, as stated in a previous study by the UB-IRBio team (Marine Environmental Research, 2017). More recent studies describe a polar scenario in which the Southern Ocean is not as isolated as thought, the biogeographical limits –winds, currents and polar fronts- are blurred and remote archipelagos –between 45º and 60º southern latitude- are key points for the expansion over the polar front.

The authors of the study warn that, in this situation of ecological and climate change, threatened by the effects of global change, research and monitoring natural ecosystems becomes more necessary to preserve biodiversity.