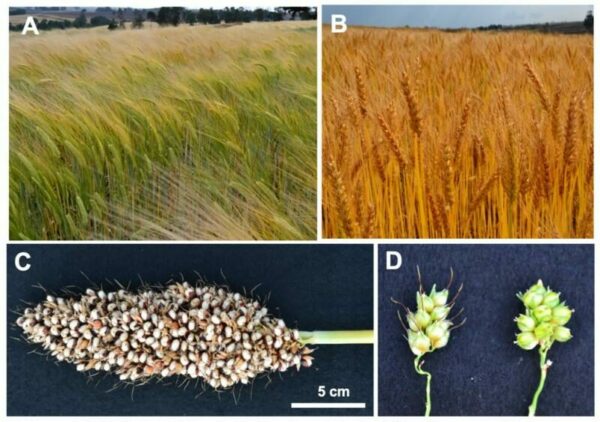 Over the years, the domestication of grasses like wheat, rice, barley, and sorghum for consumption has resulted in certain modifications to their morphology. One such modification is the partial or complete elimination of the ‘awns’, which are the bristle- or needle-like appendages extending from the tip of the lemma in grass spikelets. The awn protects the grains from animals, promotes seed dispersal, and helps in photosynthesis in grasses like barley and wheat. However, its presence also hinders manual harvesting and reduces its value as livestock feed, explaining its elimination during domestication.

In the past, genetic studies have revealed the mechanism underlying awn development in crops such as rice and wheat. These indicate the possibility of the existence of complex and distinct genetic networks controlling awn formation in a species-specific manner. In fact, the existence of an awn-inhibiting gene in sorghum was identified in 1921, but remained uncharacterized thereafter. Now, a group of researchers—led by Prof. Wataru Sakamoto of Okayama University and including Prof. Hideki Takanashi of the Graduate School of Agriculture and Life Science, Tokyo University—has finally shed light on this subject. Their research was published in Plant and Cell Physiology.

Justifying the rationale behind studying awn inhibition in sorghum, Prof. Sakamoto says, “Sorghum is an important C4 crop for high biomass and bioenergy. It has a high tolerance to drought, besides being the fifth largest cultivated cereal crop. Also, it is a morphologically diverse crop with a relatively small genome size, making it suitable for genetic studies in various agronomical traits.”

For the purpose of this study, a recombinant inbred population derived from a cross between “awnless” (BTx623) and “awned” (Takakibi NOG) sorghum varieties was created. “The prospect of gene hunting in sorghum using the population we generated for the last ten years was motivating”,comments Prof. Sakamoto. Using next-generation sequencing, the researchers established a high-density genetic map of this recombinant cultivar. Next, they performed quantitative trait loci analysis of the sorghum germplasm to identify the gene controlling awn development. They also conducted genome-wide association studies to identify the origins of the awn-inhibiting gene. Lastly, they introduced the awn-inhibiting gene in an awned rice cultivar to check its functionality in other grass species.

The researchers observed that approximately half of the recombinant cultivar population studied did not develop awns, just like their awnless parent. Moreover, they found a single locus on the cultivar chromosome to be responsible for regulating the absence as well as shortening of awns in the cultivars studied. They identified the gene corresponding to this locus as DOMINANT AWN INHIBITOR,or DAI.

The researchers found that DAI encodes a protein in the ALOG family, which negatively regulates awn formation as a transcription factor. Interestingly, when DAI was introduced into the awned rice cultivar, it suppressed awn formation. In the words of Prof. Sakamoto, “It was surprising that DAI also inhibits awn elongation in rice grains, because no such genes have been reported in rice. Thus, eliminating awns in cereal grains have occurred differently among cereal crops, but the mechanism can be shared between them.”

In short, this study has established the importance of DAI for the development of modern awnless cultivars. Also, it points to the existence of a common mechanism of awn inhibition, despite the existence of species-specific inhibitors. Going ahead, further analysis is needed to understand the transcriptional regulation of DAI besides clarifying the association of DAI with sorghum domestication. As Prof. Sakamoto points out, “In the long term, the understanding of genetic traits affecting cereals can help us in making new varieties.”