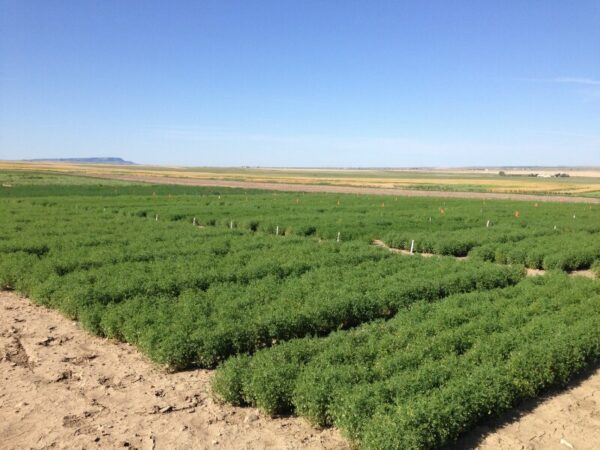 Underneath the surface, plant roots are hard at work. Roots, of course, are how plants get water and minerals from the soil. But digging into how different root systems affect crop yields has been challenging for researchers.

“We know so much less about root traits and how they impact crop yields compared to leaf characteristics,” says Maryse Bourgault, a researcher at the University of Saskatchewan, Canada.

Bourgault is the lead author of a new study in which researchers unearth links between root systems and yield in lentil and pea crops grown in semi-arid areas. This study was published in the Plant Phenome Journal, a publication of the Crop Science Society of America.

A large percentage of global lentil exports originate in the Northern Great Plains in the United States and Canada. In these semi-arid areas, almost 4.5 million hectares – more area than the state of Maryland – are used to grow pea and lentil crops.

Bourgault and colleagues found that the highest yielding pea and lentil varieties had quite different root system structures.

In peas, the situation was more complex. The highest yielding pea varieties tended to have root systems that were average in size.

“We think that root growth in peas may be more about timing during the plants’ growing season,” says Bourgault. The researchers think that the majority of root growth needs to happen before pea plants flower. “Once flowering happens, all the energy from photosynthesis needs to go to the pea pod development rather than the root growth.”

The finding that different root systems would lead to higher yields in different crops went somewhat against the grain. The prevailing pattern was that a “deep but lean” root system would be most beneficial to all crops in semi-arid areas.

“The ‘deep but lean’ idea was based on research of wheat crop,” says Bourgault. A study found that a variety of wheat with a lean but deep root system was better adapted to semi-arid areas.

That may have been because wheat plants with deep root systems had access to water deeper in the soil. Yet, the leanness of the root system meant the plants hadn’t invested too many resources in the roots, allowing for higher grain yields.

“The ‘deep but lean’ idea has been very popular,” says Bourgault. “We demonstrated that this is not a universal truth – what might be true in wheat may not be true in other crops.”

Bourgault’s findings also highlight the advantages of studying crop root systems directly, especially in semi-arid areas, where water can often be in short supply. “I think we are at the point where the next big gains in yields for semi-arid areas will come by having a serious look at root systems and understanding how they work,” she says.

The study site was located at the Northern Agricultural Research Center of Montana State University. From 2017 to 2019, the researchers scanned and measured root lengths in 29 pea and 25 lentil varieties.

“We found there were many differences between pea and lentil varieties in how much they invest in root systems,” says Bourgault.

Bourgault and her colleagues are now looking to identify genes or genetic regions in lentils and peas associated with robust root trait data. “That could potentially be a game changer for introducing root traits in breeding programs,” she says.