Flowers of the Global Plant Council

A while ago we published a blog post about the sequencing of the Bauhinia genome. Bauhinia x blakeana is the national flower of Hong Kong, so naturally this sparked our interest in the global importance of flowers as national symbols, such as the English rose. Here we list just a few of the more interesting and unusual plants that are the national symbols of countries hosting GPC member organizations. 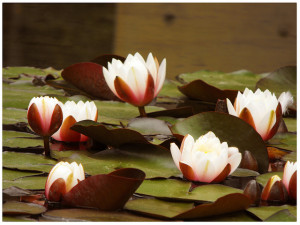 The Lotus Plant (Nelumbo nucifera) is an aquatic plant in the Nelumbonaceae family, and is the national flower of India and Vietnam. Image by alterna used under Creative Commons 2.0.

The lotus plant (Nelumbo nucifera) is considered sacred in the Buddhist and Hindu religions, and been used for over 7000 years in Asia as a source of food, herbal remedy and fibers for clothing. In 2013 its genome was sequenced, allowing its phylogenetic history and adaptations for the aquatic environment to be more fully understood.  For example, the plant has a number of genes enabling its adaptation to the nutrient poor soils in waterways, altering its novel root growth, iron regulation and phosphate starvation.

Researchers at the University of Adelaide, Australia, showed that the lotus actually has the ability to regulate the temperature of its flowers, maintaining them between 30 and 36 °C even when air temperature dropped below this. Quite how or why it does this is still unknown, but warmer flowers could play a role in attracting cold-blooded insects and increasing their activity once on the flowers to enhance pollination. An alternative explanation could be that warmer temperatures are required for pollen production.

Another fantastic fact about the lotus is seed viability. A 1300 year old lotus fruit found in a dry lakebed in China was successfully germinated, providing an insight into the aging process of fruits and other organisms 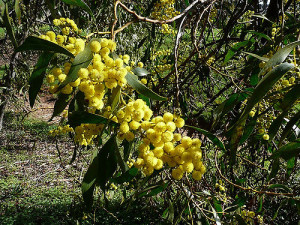 The golden wattle (Acacia pycnantha) is a member of the Fabaceae family. The plant is a small tree that can grow up to 12 meters high! In Australia the 1st September is National Wattle Day. Image by Sydney Oats used under Creative Commons 2.0.

The Australian national flower is the Acacia pycnantha, or wattle, first described in 1942. Its name comes from the Greek pyknos (dense) and anthos (flowers) describing the dense groups of flowers that form on the tree. The wattle is an important source of tannins, and as such has been introduced to parts of southern Europe such as Italy and Portugal in addition to India and New Zealand. The wattle is also found in South Africa where it has now become an invasive pest, and various methods of biological control such as gall forming wasps (Trichilogaster signiventris) are being used to control populations. 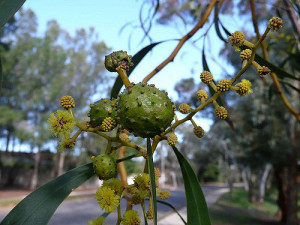 Galls on a wattle tree from T. signiventris. Eggs are laid by the wasp in the buds of flower heads and the hatched larvae induce gall formation which prevents flower development. This in turn prevents pollination and continued propagation of the Wattle population. Image by Sydney Oats used under Creative Commons 2.0. 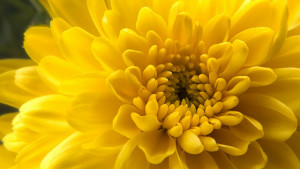 The yellow Chrysanthemum is a member of the Asteraceae family. Species of the Chrysanthemum enus are popular ornamental plants, and as such many hybrids and thousands of cultivars in a variety of colors and shapes can be found. Image by Joe deSousa used under Creative Commons 1.0.

Although cherry blossom is often the flower most associated with Japan, yellow Chrysanthemum flowers are equally as important. The flower is used as the Imperial Seal of Japan and on the cover of Japanese passports. Species of the genus Chrysanthemum are members of the Asteraceae (daisy) family.

Two species of the Chrysanthemum genus, C. cinerariifolium and C. coccineum, synthesize pyrethrum compounds, which attack insect nervous systems. As such these species make good companion plants in the field, repelling insects from economically valuable neighboring plants that do not have their own defense mechanisms. The naturally produced toxins are widely used in organic farming, and many synthetic versions are also available commercially. 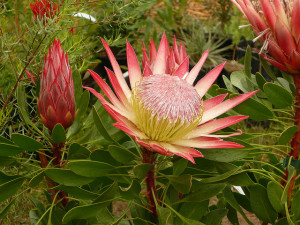 The king protea (Protea cynaroides)  is a member of the Proteaceae family and the national flower of South Africa. The South African cricket team has the nickname the Proteas, after the flower. Image by Virginia Manso, used under Creative Commonds 2.0.

The king protea (Protea cynaroides) can grow up to 2 meters in height and comes in several colors and varieties. The plant grows in harsh, dry regions prone to wildfire, and as such has a number of adaptations for the environment. For example, a long tap-root is used for accessing deep water, and tough leathery leaves are resilient to both biotic and abiotic stress. The protea has a thick underground stem with many dormant buds. After a wildfire these dormant buds can become active, forming new stems allowing the plant to survive!

The king protea is only one species within the large Proteaceae family, 120 species of which are now endangered listed on the IUCN Red List of threatened species. The Protea Atlas Project aims to map the geographical location of proteas through Southern Africa in order to help preserve the family. In addition to protea, Southern Africa is home to around 24 000 plant taxa, 80% of which occur no where else in the world. A wider objective of the Protea Atlas Project is to map species-richness patterns in Southern Africa. The distribution of Protea plants within the region largely seems to match the species-richness patterns of other plant species, and therefore proteas are being used as surrogates for plant diversity. Find out more about the project and get involved here. 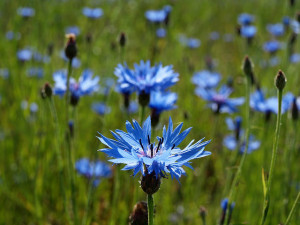 The cornflower (Centaurea cyanus) is a member of the Asteraceae family, like the Chrysanthemum. Image by Anita used under Creative Commons 2.0.

We have a large number of European and Scandinavian member groups, and choosing one flower to represent all of those was a challenge. However, the humble Cornflower seemed an appropriate choice to represent our European societies. This member of the daisy family is not only the national flower of Germany and Estonia, but has a place in many Scandinavian cultures being the symbol for a number of political parties in Finland and Sweden.

In the past this beautiful flower was regarded as a weed, but now due to intensive agricultural practices has become endangered. Cornflowers have many uses in addition to being an ornamental plant. The plant is used in many blends of herbal tea, flowers are edible in salads, and the blue coloring can be used as a clothes dye.

Although not technically a flower, the leaf of the maple tree  is such an iconic symbol on the Canadian flag we just had to include it (we are the Global Plant Council after all). There are many species of maple tree in the genus Acer, which can be distinguished from other genus of trees by their distinctive leaf shape. The most important species of maple in Canada is probably Acer saccharum, the sugar maple. The sap of this species is the major source of maple syrup, and its hard wood is popular for use in flooring and furniture. 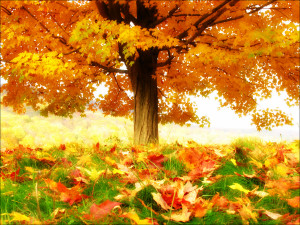 The sugar maple grows throughout the USA and Canada, favoring cooler climates and is a very shade tolerant species.  Despite this, the sugar maple is now in decline in many regions. It is highly susceptible to increased levels of air pollution and changes to salt levels. As such the species is now being replaced in many regions by the hardier Norway Maple. 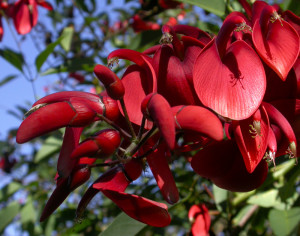 The bright red flowers of E.crista-galli are the national flowers of Argentina and Uruguay. Image by Gabriella F.Ruellan used under Creative Commons 2.0.

The small tree is a legume from the family Fabaceae. Characteristically of species from this family, the fruit of the cockspur coral tree are dry pods, and the roots have nodules containing nitrogen fixing bacteria making them important for increasing the available nitrogen in the soil. Although native to South America, the tree is also naturalized in Australia, where it is becoming an emerging environmental weed. The tree is invading waterways and wetlands displacing native species, and its spread is now being controlled in New South Wales.

If your country has a particularly interesting national flower that we have missed let us know! Perhaps we can include it in a future blog post.