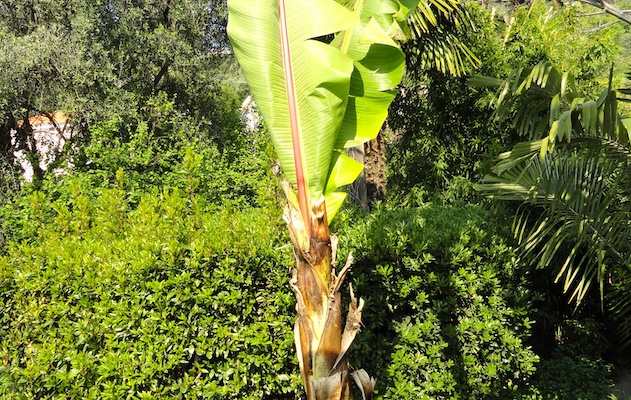 In a new study published in the journal Plants People Planet, scientists from the Royal Botanic Gardens, Kew, the Natural Resources Institute (NRI) of the University of Greenwich, UK, the Alliance of Bioversity International & CIAT (the International Center for Tropical Agriculture), and Hawassa University, Ethiopia, have found that smallholder farmers in Ethiopia grow more of the indigenous crop Ensete ventricosum in the direct aftermath of severe droughts as a means of bolstering food security.

E. ventricosum or enset, has long been known as Ethiopia’s ‘tree against hunger’ thanks to its remarkable versatility as a crop, and tolerance to diseases and drought. Now, researchers are beginning to understand the role enset and other perennial food crops play as ‘climate coping strategies’ in parts of Ethiopia susceptible to long-term drought events, particularly as a buffer against other crop failures.

It is estimated that more than half of the world’s food-derived calories are grown on smallholder farms less than two hectares in size. Most of these farms are largely dependent on rainfall for irrigation and have little-to-no access to expensive inputs such as tools, seed, machinery and fertilisers. This combination of factors leaves smallholder farmers vulnerable to extreme weather events, such as prolonged drought, and climatic variability associated with climate change.

According to the new research, however, indigenous knowledge and farming practices in Ethiopia point towards ways of coping in the aftermath of periodic drought, which is a frequent occurrence in the Horn of Africa. The study’s authors collected agriculture statistics and regional climate data to determine whether there is a relationship between climate and crop production area, with a focus on enset and other associated food crops in the southwest of the country.

The researchers found that enset cultivation dominated in those parts of the country where drought was more frequent over the past century, meaning it is most likely to be grown to act as a buffer against the impacts of drought. Furthermore, they found that farmers increase their enset production over time as a consequence of drought events, which appear to influence a wider shift in agronomic practices towards perennial or storable crops.

“We can learn a lot from how indigenous agriculture systems have evolved with the changing climate over the centuries. Farmers in the highlands of Ethiopia maintain a highly diverse mix of crops and livestock centred around enset that allows them to cope with drought-related food shortages. It is a prime example of how biodiversity and climate-resilient crops contribute to sustainable agriculture.”

First author Rachel Chase, of the Natural Resources Institute and the Alliance of Bioversity & CIAT, says

This study forms part of Rachel’s PhD research which she is undertaking as part of NRI’s Food and Nutrition Security Initiative (FaNSI), through which the institute has been expanding its research capacity and partnerships with a specific focus on addressing climate change, food loss and waste, sustainable agricultural intensification and food systems for nutrition.

“Enset is a truly remarkable plant and though few people have heard of it outside of Ethiopia, it remains an incredibly important crop for millions of subsistence farmers. Enset has unique characteristics that sets it apart from many other familiar crops like annuals; foremost it’s perennial and can be planted or harvested it at any time. This means farmers use it as a ‘green asset’ – like a bank account of food – to buffer against food shortages when access to other crops is limited. This is exactly why it has earned the name, the ‘tree against hunger’.”

More than 20 million people across Ethiopia already rely on enset for food, and even though it belongs to the same family as bananas, it does not produce edible fruit. Instead, farmers cultivate enset trees for their carbohydrate-rich pseudostems (trunks) and corms (fleshy underground stems or bulbs) which are used for a range of products and dishes. The corm, chopped up and boiled like potato, is known as amicho; the pseudostems are often processed by hand into a starchy pulp which is then fermented in the ground for up to 12 months before being used to make a bread-like product called kocho. For many families, such enset products are important staples, which accompany a range of stews and sauces.

Also known as the false banana or Abyssinian banana, an individual enset plant can grow up to 10 metres tall and as little as 15 plants can feed a single person for an entire year. Although present in parts of east and central Africa, enset is only cultivated in parts of Ethiopia, though research suggests it has the potential to be grown in many other areas and could contribute to food security.

But the ‘tree against hunger’ has many more uses that make it a particularly valuable resource for Ethiopia’s smallholder subsistence farmers. Material taken from enset has a wide variety of applications, including fibre, building material, medicine, animal fodder, and the plant has a significant cultural value for local communities.

“Our findings confirm that Ethiopian smallholder farmers choose to plant more enset in response to drought. Based on this we can ask questions about how enset resists drought and which varieties are most drought tolerant by studying indigenous knowledge as well as enset morphology and physiology. It is hoped that this information will help the people of Ethiopia and the wider region be better prepared for the projected increase in climate variability.”