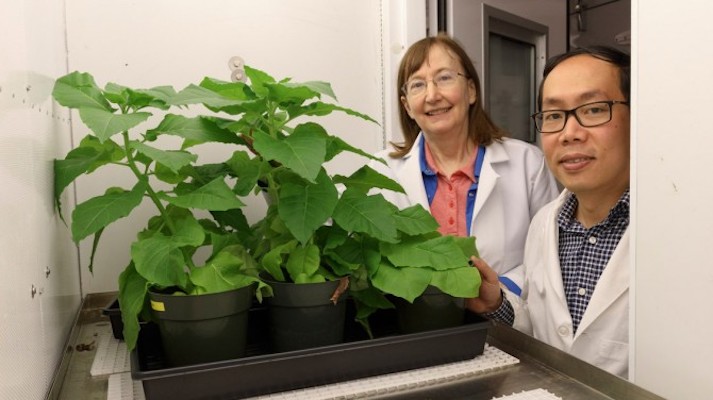 Scientists have engineered a key plant enzyme and introduced it in Escherichia coli bacteria in order to create an optimal experimental environment for studying how to speed up photosynthesis, a holy grail for improving crop yields.

The method is described in a paper, “Small subunits can determine enzyme kinetics of tobacco Rubisco expressed in Escherichia coli” published in the journal Nature Plants.

Scientists have known that crop yields would increase if they could accelerate the photosynthesis process, where plants convert carbon dioxide (CO2), water and light into oxygen and eventually into sucrose, a sugar used for energy and for building new plant tissue.

Researchers have focused on Rubisco, a slow enzyme that pulls (or fixes) carbon from carbon dioxide to create sucrose. Along with CO2, Rubisco sometimes catalyzes a reaction with oxygen from the air, and when it does, it creates a toxic byproduct and wastes energy, thereby making photosynthesis inefficient.

“You would like Rubisco to not interact with oxygen and to also work faster,” said Maureen Hanson, the Liberty Hyde Bailey Professor of Plant Molecular Biology in the College of Agriculture and Life Sciences at Cornell Universty.

In an effort to achieve that, the researchers took Rubisco from tobacco plants and engineered it into E. coli. Tobacco serves as a common model plant in research. “We can now make mutations to try to improve the enzyme and then test it in E. coli,” Hanson said.

The advantage is that since bacteria reproduce so rapidly, researchers may test an altered Rubisco in E. coli and get results the next day. “If you introduce a new Rubisco into a plant, you have to wait a few months” to get results, she said.

Initial work by another group that engineered tobacco Rubisco into E. coli led to very weak expression of the enzyme. In plants, Rubisco is composed of eight large and eight small subunits. A single gene encodes each large subunit, but many genes encode each small subunit. The complex process of enzyme assembly and the presence of multiple versions of the enzyme in plants has made it very hard to experiment with Rubisco.

Led by Myat Lin, a postdoctoral research associate in Hanson’s lab and the paper’s first author, the researchers were able to break down the process and express a single type of large subunit and a single type of small subunit together in E. coli, to understand the enzyme’s properties. By doing this, they attained expression of the enzyme in E. coli that matched what was found in plants.

They also discovered that a Rubisco subunit found in trichomes (tiny hairs on plant leaves) worked faster than any of the subunits found in leaf cells.

“We now have the ability to engineer new versions of plant Rubisco in E. coli and find out whether the properties of an enzyme are better,” Hanson said. “Then, we can take the enzyme that’s improved and put that into a crop plant.”

In the Hanson lab, Lin and Stone were supported by the U.S. Department of Energy to develop the E. coli expression system and test enzyme kinetics, and Chaudhari was funded by the National Science Foundation to examine expression of individual small subunits in tobacco.