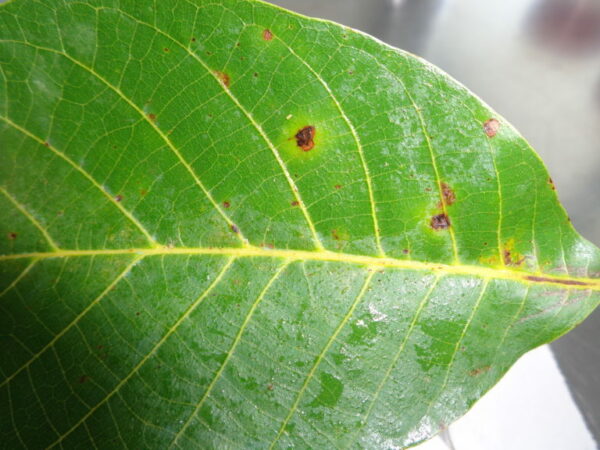 A new bacteria from diseased walnut discovered in Portugal

Bacteria recently isolated from walnut (Juglans regia L.) buds in Portugal has been identified as a new species of Xanthomonas. Interestingly, this new species baptised as Xanthomonas euroxanthea includes both pathogenic and non-pathogenic strains on walnut, constituting a unique model to address the emergence and evolution of pathogenicity in Xanthomonas. This discovery resulted from an international collaboration within the framework of European Cooperation in Science & Technology, COST Action EuroXanth.

The scientific evidence that validates this new species, X. euroxanthea, was published in the International Journal of Systematic and Evolutionary Microbiology.

The work leading to this finding was a collaboration between Dr Fernando Tavares’ group from the Research Centre in Biodiversity and Genetic Resources and InBIO Associate Laboratory (CIBIO-InBIO) located in Oporto, Portugal, and Dr Joël F. Pothier from the Environmental Genomics and System Biology research group from the Zurich University of Applied Sciences (ZHAW) in Switzerland. This study benefited from a Short-Term Scientific Mission from COST Action EuroXanth to develop this work, hence the name “X. euroxanthea”.

The new species, X. euroxanthea was found during a survey that revealed high genetic diversity of the walnut-associated bacteria X. arboricola pv. juglandis  throughout distinct bioclimatic regions of Portugal and even within a single walnut tree. In fact, pathogenic and non-pathogenic xanthomonads lineages were found co-colonising a single walnut tree, suggesting a sympatric lifestyle which may contribute to unveil genetic trade-offs related to pathogenicity of Xanthomonas. This was the first time that a non-Xanthomonas arboricola species is proven to cause disease in walnut.

These results hold much promise, because now the scientific community has a unique model to assess emergence of evolution of pathogenicity as well as the co-evolution of bacteria that share the walnut tree has a host.

“The next step will be to study the key genes involved in pathogenicity and virulence in this new species aiming to develop detection markers for detection of pathogenic strains through phytosanitary surveys to delineate effective epidemiologic control plans. Genomic analysis revealed significant differences on the profiles of pathogenicity and virulence genes, which can be determinant in explaining distinct lifestyles and infective behaviour.”

Dr. Fernando Tavares, professor of the Faculty of Sciences of the University of Porto and researcher at CIBIO-InBIO commented.

Dr. Joël F. Pothier stated: “The work carried by the two research institutions is a perfect example of COST’s mission: provide networking opportunities to facilitate cooperation in science and technology. Additionally, the collaborative work between researchers from three countries participating on this Action was fostered by a Short-Term Scientific Mission from an Early Career Investigator, Camila Fernandes, from an Inclusiveness Targeted Country. These are exactly among the priority values that COST is promoting. We are thus very proud, as the Action chair Dr. Ralf Koebnik also noted, that our work made our Action immortal by naming the bacterium after it!”

Read the paper: International Journal of Systematic and Evolutionary Microbiology