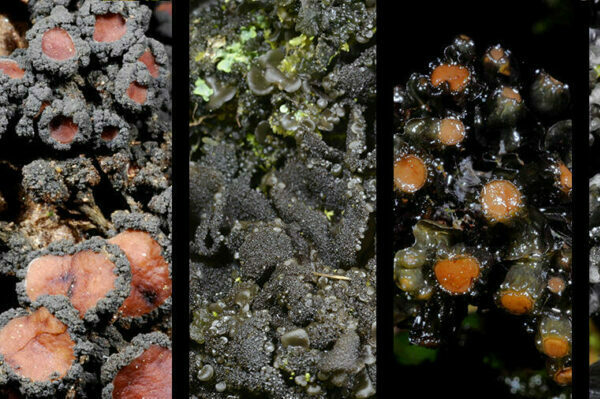 The species diversity and relationships of lichens in the genus Leptogium, which are often very difficult to identify to species, were assessed on the basis of DNA analyses using a large dataset collected during almost 10 years from East Africa.

The research article just published focuses on species diversity in the genus Leptogium, a group of jelly lichens that are common in the mountain forests of East Africa. Thousands of lichen specimens were collected from Kenya and Tanzania in 2009–2017, including nearly 600 Leptogium specimens.

DNA analyses revealed that the dataset on Leptogium included more than 70 different species, of which no more than a dozen or so are previously known. DNA analyses were necessary, as species identification based on thallus structure is notoriously difficult in this group.

“The morphological differences between species are often subtle and open to interpretation, and the outer appearances of individual species can also vary greatly depending on environmental factors. Even chemical characteristics cannot be used as an aid for identification to the extent to which they are used with many other groups of lichens,” Rikkinen notes.

Due to problems in species delimitation and identification, Leptogium specimens with a more or less similar outer appearance collected from different parts of the world have traditionally been assigned to the same species. For example, Leptogium cyanescens and Leptogium rivulare, species which grow in Finland, have been thought to also inhabit the tropical rain forests of East Africa. However, the new research findings indicate that many Leptogium species can have narrow ranges, and that the total number of species in the genus is much higher than previously thought.

“Similar results have also been obtained from many other genera of lichens whose diversity has been recently studied with DNA analysis methods,” says Docent Ulla Kaasalainen, who leads a research project on tropical lichens at the University of Göttingen.

Image: Thousands of lichen specimens were collected from Kenya and Tanzania during 2009–2017. DNA analyses revealed that the dataset on Leptogium included more than 70 different species, of which no more than a dozen or so are previously known. Credit: JOUKO RIKKINEN