Considering its weedy nature, Arabidopsis thaliana is a fussy little plant. This can be a pain – even tiny environmental fluctuations can have significant impacts on the physiology and development that many of us are investigating.

As silly as it sounds, my labmates and I have spent many months debating the best compost media to use when growing Arabidopsis for research. It began when our trusted compost supplier changed the formula of its peat-based compost, which stressed our plants and turned them a lovely shade of purple! The conversation has continued to develop as we learn about the different media used in other laboratories.

A new paper from Drake et al. at my university (University of Bristol, UK) has added a new depth to the debate, so I thought I’d bring it all to your attention and perhaps receive some other suggestions to consider! 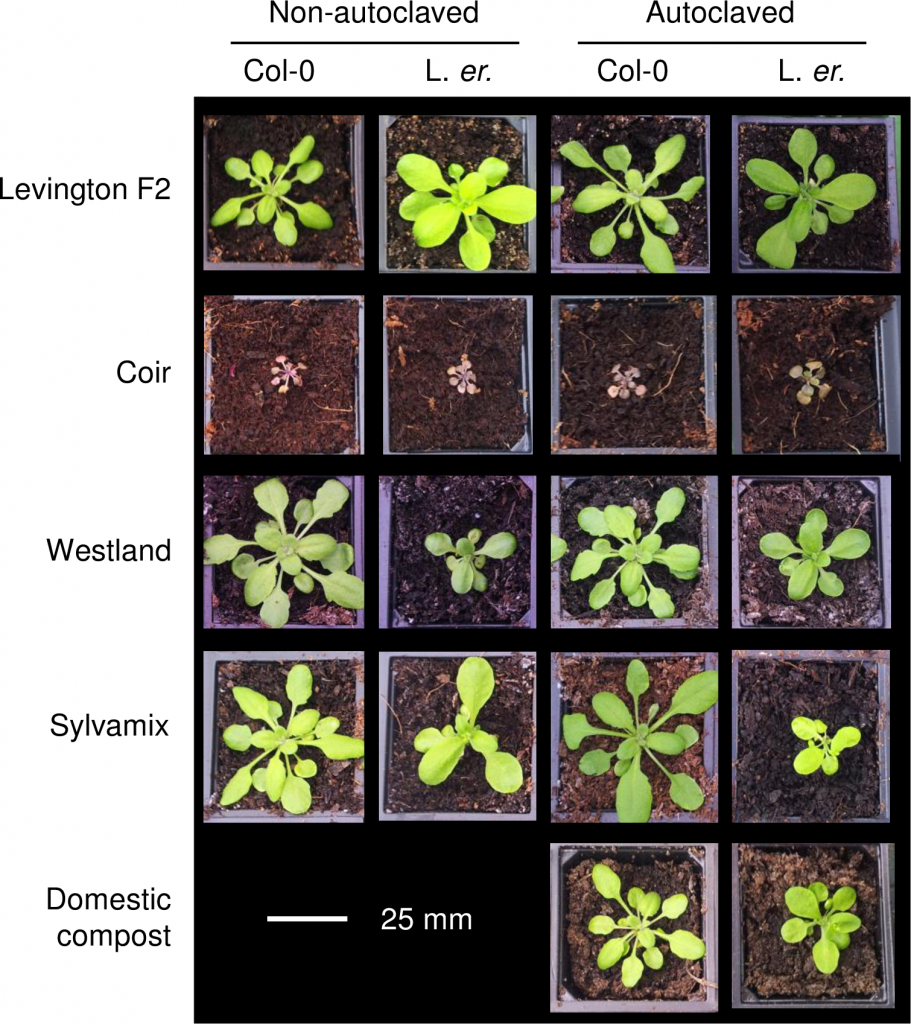 The experiment, led by Dr Antony Dodd, was designed to test whether peat-based composts could be replaced by alternatives in Arabidopsis research, in an attempt to reduce plant science’s use of unsustainable peat extraction. The researchers grew two ecotypes of Arabidopsis (Col-0 and Ler) on both autoclaved and non-autoclaved composts, including peat-based compost and some formed of coir, composted bark, wood-fiber, and a domestic compost.

In terms of reducing peat use, Arabidopsis unfortunately grew best on the peat-based growing media, although some vegetative traits were comparable in some peat-free composts.

This study caught my eye for another reason, however. We always sterilize our compost before growing Arabidopsis to reduce its contamination by fungi and insect pests; however, after learning that manganese toxicity can become a problem, we no longer autoclave it. As you can see in Boyd’s 1971 paper, manganese is converted to a more bioavailable form during the autoclave process, which can be toxic to plants.

Interestingly, Drake et al.’s research revealed no differences in Arabidopsis growth on autoclaved vs. non-autoclaved media, but I expect that in other environmental conditions the elevated manganese availability could become a problem. They did find that the autoclaved soil actually had more issues with mildew and algae, possibly because the natural microbiota had been killed and the compost was therefore easier to colonize.

One of the biggest issues our lab has with non-autoclaved soil is the presence of small insects, which can predate our precious plants. A potential alternative to autoclaving is to treat the media with insecticide, such as imidacloprid, a neonicotinoid. However, many labs have stopped using these pesticides; in 2010, Ford et al. showed that several neonicotinoids, including imidacloprid, induce salicylate-associated plant defense responses associated with enhanced stress tolerance, while in 2012, Cheng et al. found 225 genes were differentially expressed in rice plants treated with imidacloprid. In experiments designed to measure precise physiological responses, I’m not convinced that it’s a good idea to use these pesticides!

To avoid using autoclaves and insecticides, you could consider baking compost overnight at 60°C (140°F) to try and kill fungal spores and insects, freezing the media, and/or using biocontrols to tackle insect pests, such as nematodes or mites.

In the peat vs. non-peat debate, it looks as though peat-based media are still the frontrunners in terms of compost, but hydroponic systems are becoming more popular as a way of tightly controlling nutrient regimes and manipulating whole plants more easily. Check out this video from Associate Professor Matthew Gilliham (University of Adelaide, Australia) to learn more about the technique: