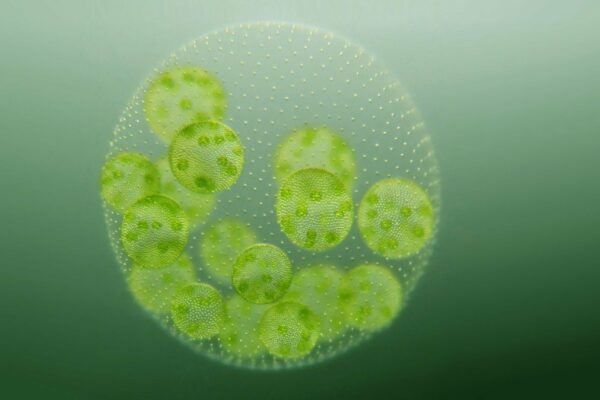 Cell division in microalgae: mitosis revealed in detail for the first time

Cell division ensures growth or renewal and is thus vital for all organisms. However, the process differs somewhat in animals, bacteria, fungi, plants, and algae. Until now, little was known about how cell division occurs in algae. Researchers at Bielefeld University have used confocal laser scanning microscopy (CLSM) to capture the very first high-resolution three-dimensional images of cell division in live cells of the microalga Volvox carteri, and have identified new cellular structures involved in the process. Professor Dr Armin Hallmann from the Faculty of Biology is leading the study. The findings have now been published open access in the journal The Plant Cell.

The cell is the smallest organisational unit of life. It contains the necessary building blocks of life in a compact form and is the place where vital biochemical reactions take place. With the help of enzymes, substance and energy transformations take place, which are processes also known as metabolism. The cell interior is separated and thus protected from the environment by the cell membrane. Genetic material, the cell’s information store, is often located in the cell nucleus as DNA. When a cell divides by mitosis, it first divides its nucleus into two identical daughter nuclei with the same genetic material. Then the rest of the cell divides and two identical daughter cells are produced. The complex, genetically determined process of mitosis in particular must take place very precisely: the entire genetic material, divided into chromosomes, must be segregated accurately into the two daughter cell nuclei.

Cell division of the alga Volvox carteri combines animal and plant characteristics
‘Cell division is one of the most fundamental processes in living organisms. It has basically been preserved over countless millions of years of evolution and can be found in all organisms,’ says Professor Dr Armin Hallmann, head of the Cellular and Developmental Biology of Plants research group at Bielefeld University. Yet the mechanisms of cell division in animals, fungi, plants, and algae each have characteristic features. The multicellular green alga Volvox carteri is a particularly interesting case in point. ‘It exhibits both animal and plant features in mitosis,’ says Hallmann. The researchers have now been able to clarify this phenomenon in their study. ‘Until now, researchers knew very little about the exact process of mitosis in this green alga.’

The first two features concern the envelope of the microalgal nucleus. ‘The nuclear envelope does not disintegrate at the beginning of mitosis, as is often the case, but remains in place until shortly before nuclear division is completed,’ says Armin Hallmann. ‘Instead, it becomes porous and permeable, so that cellular components are exchanged between the inside of the cell nucleus and the cytosol—a fluid that surrounds the cell nucleus. Hence, for a certain period of time, the cell nucleus loses its typical property as a confined reaction space, although the nuclear envelope is still present.’

The third feature is related to the centrosomes of the cell. These are cell structures that play a central role in the organisation of the mitotic spindle here. The mitotic spindle arranges the chromosomes in such a way that they can be segregated accurately into the two newly forming cell nuclei. ‘We have been able to show that the centrosomes play a crucial role in the mitosis of Volvox carteri even though they are located outside the nuclear envelope. They form the basic structure for organising the precise division of the genetic material with the help of the nuclear division spindle within the nuclear envelope. Until now, we only knew about an organisation of the spindle by centrosomes from cell division in animals,’ says Hallmann.

A fourth feature is the formation of a specific filamentous structure, the phycoplast, at the end of mitosis. After the cell nucleus has divided, the rest of the cell must also divide so that the newly formed cells can finally separate from each other. The dynamic phycoplast is the basis for the formation of a cleavage furrow which ultimately divides the cell, whereas plants form a different structure which ultimately leads to the formation of a separating, solid cell wall. ‘The special thing about algae is that the phycoplast is formed directly by recycling the nuclear division spindle, which is then no longer required,’ explains the scientist.

Finally, the researchers were able to detect an enormous dynamic of the entire inner architecture of the cell as well as of the nuclear envelope during cell division.

Making molecular processes visible
The researchers were able to record the cell division processes by producing fluorescent proteins (proteins that glow when exposed to light) and tracking them in the cell using confocal laser scanning microscopy (CLSM). For the first time, scientists have succeeded in imaging the mitosis of microalgae in three dimensions in live cells and characterising it in detail, using Volvox carteri as an example.

‘The question we posed ourselves was: how exactly does cell division work in green algae? Which structures are involved in mitosis and what role do they play in the process?’ says first author Dr Eva Laura von der Heyde. She previously conducted research in Hallmann’s research group as a doctoral student and is now a postdoc. In order to be able to localise important proteins involved in cell division in the cell, their genes are linked to the gene of a fluorescent protein using molecular biology techniques. The proteins involved in cell division thus become fluorescent, which makes them distinguishable from all other proteins in the cell. ‘We used a special laser to excite different fluorescent proteins to glow. Using a confocal laser scanning microscope, we were able to detect the yellow-green glow of the microstructures formed by the proteins in live cells,’ says Eva Laura von der Heyde.

The researchers also recorded on video how the proteins move during cell division, how they form microstructures, and how these structures are rebuilt. In a time-lapse video, which condenses 30 minutes of mitosis to nine seconds and shows it simultaneously in ten optical section planes, it becomes clear how the centrosomes organise the formation of the nuclear division spindle and how the nuclear division spindle finally transforms into the phycoplast after the chromosomes have separated.

Insights into evolution
In the long term, Armin Hallmann and Eva Laura von der Heyde hope to be able to build on these new findings to learn more about the evolution of cell division. How did the different variants of cell division that are found today in animals, fungi, plants, and algae come about? ‘In evolution, the first land plants developed from primordial green algae. This is why the green alga Volvox carteri also possesses properties that it has in common with land plants growing today. However, it is striking that Volvox carteri also possesses properties that can be found in animals living today. Other of their characteristics are again only found in green algae. These special characteristics also make this model organism so important for our understanding of the evolution of cell division,’ says Hallmann.