On the centennial of Borlaug’s birth Global Plant Council representatives Rodomiro Ortiz and Russell Jones reflect on his achievements and legacy. 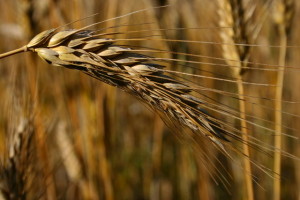 The last Nature editorial “Wheat Lag” [1] affirms “growth in yields of the cereal must double if the Green Revolution is to be put back on track”.  Google records about ½ million hits for the term “Green Revolution,” which refers to the huge increase between 1943 and the late 1970s in the production of rice and wheat, the main small grain cereals that feed the world. Plant research had led to the development of new cultivars, the sharing of seed, and improved crop husbandry. Without these developments, crop yields would have been at least 20% less and food prices about 19% higher than they had been in 2000, according to Evenson and Gollin [2]. Their modeling reveals that calorie consumption would have dropped by about 5% and the number of malnourished children increased by at least 2%. It is estimated that the Green Revolution helped improve the health status of 32 to 42 million pre-school children. 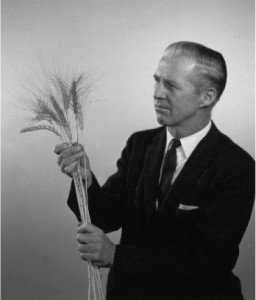 Without doubt, the leader and main advocate of this Green Revolution was the late Norman E. Borlaug (1914-2009), a wheat breeder who continues to be a source of inspiration in plant science and whose impact on livelihoods was immense [3]. As noted elsewhere, his wheat cultivars saved millions of humans from starvation and death [4]. It was therefore not surprising that the Nobel Committee of the Norwegian Parliament awarded him the Nobel Peace Prize in 1970. The award noted that, “more than any other single person of this age, he has helped to provide bread for a hungry world” [5]. Wheat breeding, however, only meant something to Borlaug if it increased production and improved food security. In his words “For more than half a century I have worked with the production of more and better wheat for feeding the hungry people, but wheat is merely a catalyst, a part of the picture. I am interested in the total development of human beings. Only by attacking the whole problem can we raise the standard of living for all people in all communities, so they will be able to live decent lives. This is something we want for all people on this planet.”

Even though critics of the Green Revolution insisted that Borlaug’s “miracle wheat” depleted natural resources [6], research shows that the net effect of high grain yields resulting from the Green Revolution reduced emissions of up to 161 gigatons of carbon (GtC) (590 GtCO2e) between 1961 and 2005 [7]. In one of his last writings, Borlaug argued eloquently with evidence that significant grain yield increases [8] actually spared land from agricultural uses. His assertion has recently been verified: plant breeding on the major staple crops between 1965 and 2004 saved an estimated 18 to 27 million hectares from being brought into cultivation [9]. The widespread adoption of high-yielding bred cultivars preserved natural ecosystems rather than displacing pastures and deforesting lands for intensive agriculture.

In his last years, Borlaug cautioned that there was no room for complacency in the fight to ensure food security, especially when there are still almost 1 billion people going to bed hungry every night in the world. He was convinced that advances in plant science could provide new tools for crossbreeding, crop husbandry and more efficient use of resources. He contended that, in the absence of scientific evidence that food derived from transgenic crops harmed either human health or the environment, consumers would benefit from their use.  Particularly in the developing world, plant biotechnology could help to ensure the food supply [10]. He always thought that uncontrolled population growth posed more threat to the environment than plant science.

Borlaug warned of the dangers of research subject to excessive organization. Research directed from the higher reaches of administration could result in scientists using valuable time to write reports justifying their work, or in finding themselves doing research isolated from their peers [8]. During his prolific professional career he advocated that “No matter how excellent the research done in one scientific discipline is, its application in isolation will have little positive effect on crop production. What is needed are venturesome scientists who can work across disciplines to produce appropriate technologies and who have the courage to make their case with political leaders to bring these advances to fruition.”

A growing world population increases the need for nutritious and quality food, feedstock, fiber, and fuel, while at the same time the Earth faces a decline in arable land. Agro-ecosystems are affected by land erosion, water scarcity, stalled crop productivity, overgrazing of pastures, deforestation, and anthropogenic climate change.  These new global challenges require an integrated plant science agenda that goes beyond productivity gains; this agenda needs to include increased resilience, eco-efficiency, and sustainability. Plant scientists need to work together with growers, retailers, entrepreneurs and policy makers for intensifying sustainably agro-ecosystems. Growers will need to increase output with less input, adapt their farming to climate change, and conserve agro-biodiversity by capitalizing on the advances brought by plant science. Agribusiness entrepreneurs together with growers and plant and food scientists need to add value throughout the food chain and improve the quality and safety of the human diet. Likewise, decision makers, with support from policy analysts, should ensure that food markets work for social benefits. Plant science must therefore contribute to a healthy and prosperous society in the 21st Century by providing knowledge, methods and tools that deliver diverse, nutritious and healthy food for a balanced diet. Increasing the wellbeing of everyone in this global village will be the best tribute to the memory of Norman E. Borlaug, the humanitarian plant scientist who changed the world.