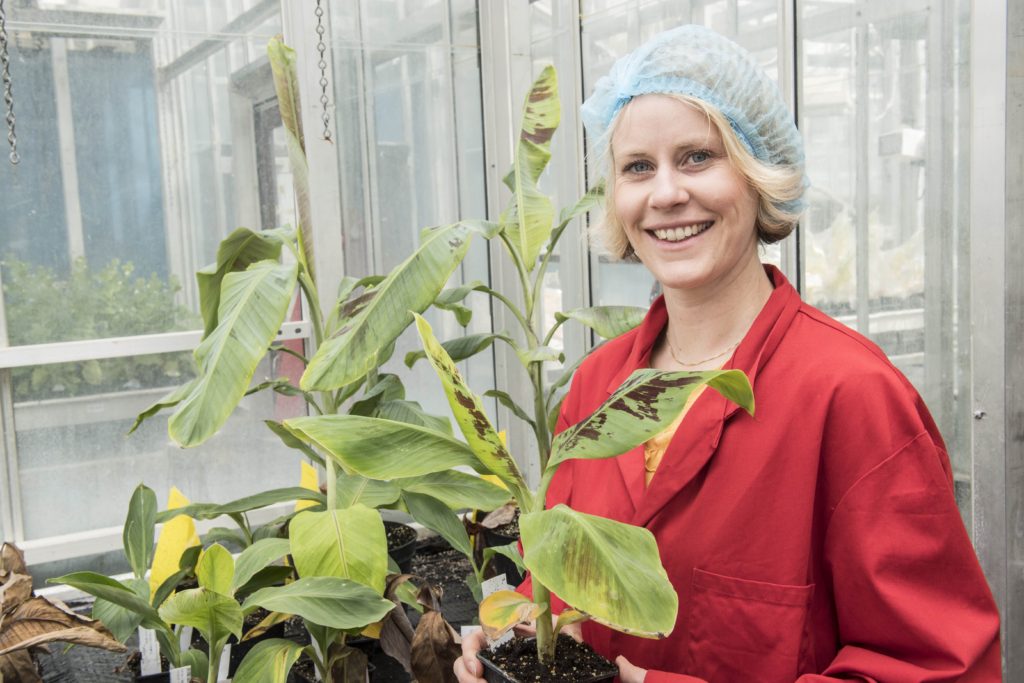 Dr. Sarah Schmidt (@BananarootsBlog), Researcher and Science Communicator at The Sainsbury Laboratory Science. Sarah got hooked on both banana research and science writing when she joined a banana Fusarium wilt field trip in Indonesia as a Fusarium expert. She began blogging at https://bananaroots.wordpress.com and just filmed her first science video. She speaks at public events like the Pint of Science and Norwich Science Festival.

Every morning I slice a banana onto my breakfast cereal.

And I am not alone.

Every person in the UK eats, on average, 100 bananas per year.

Bananas are rich in fiber, vitamins, and minerals like potassium and magnesium. Their high carbohydrate and potassium content makes them a favorite snack for professional sports players; the sugar provides energy and the potassium protects the players from muscle fatigue. Every year, around 5000 kg of bananas are consumed by tennis players at Wimbledon. 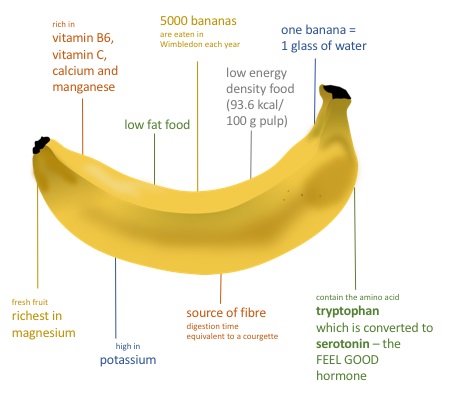 But bananas are not only delicious snacks and handy energy kicks. For around 100 million people in Sub-Saharan Africa, bananas are staple crops vital for food security. Staple crops are those foods that constitute the dominant portion of a standard diet and supply the major daily calorie intake. In the UK, the staple crop is wheat. We eat wheat-based products for breakfast (toast, cereals), lunch (sandwich), and dinner (pasta, pizza, beer).

In Uganda, bananas are staple crops. Every Ugandan eats 240 kg bananas per year. That is around 7–8 bananas per day. Ugandans do not only eat the sweet dessert banana that we know; in the East African countries such as Kenya, Burundi, Rwanda, and Uganda, the East African Highland banana, called Matooke, is the preferred banana for cooking. Highland bananas are large and starchy, and are harvested green. They can be cooked, fried, boiled, or even brewed into beer, so have very similar uses wheat in the UK. 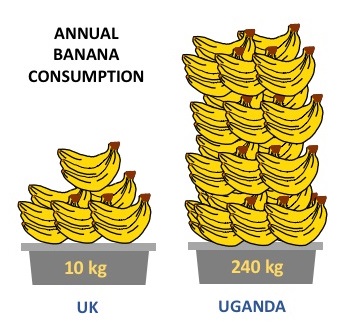 In West Africa and many Middle and South American countries, another cooking banana, the plantain, is cooked and fried as a staple crop.

In terms of production, the sweet dessert banana we buy in supermarkets is still the most popular. This banana variety is called Cavendish and makes up 47% of the world’s banana production, followed by Highland bananas (24%) and plantains (17%). Last year, I visited Uganda and I managed to combine the top three banana cultivars in one dish: cooked and mashed Matooke, a fried plantain and a local sweet dessert banana! 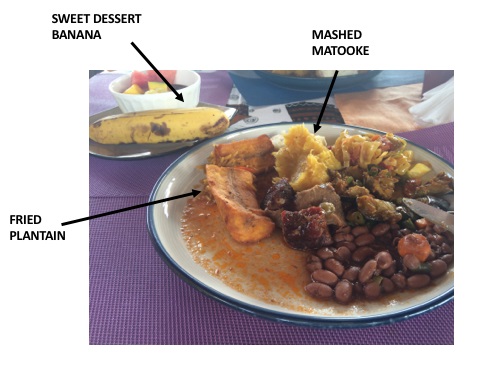 Three types of banana in a single dish in Uganda.

Another important banana cultivar is the sweet dessert banana cultivar Gros Michel, which constitutes 12% of the global production. Gros Michel used to be the most popular banana cultivar worldwide until an epidemic of Fusarium wilt disease devastated the banana export plantations in the so-called “banana republics” in Middle America (Panama, Honduras, Guatemala, Costa Rica) in the 1950s. 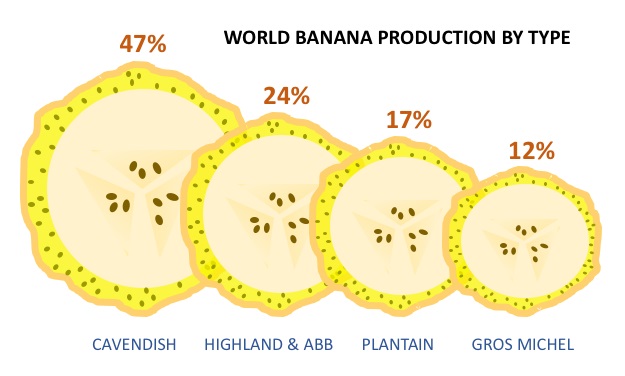 Fusarium wilt disease is caused by the soil-borne fungus Fusarium oxysporum f. sp. cubense (FOC). The fungus infects the roots of the banana plants and grows up through the water-conducting, vascular system of the plant. Eventually, this blocks the water transport of the plant and the banana plants start wilting before they can set fruits. 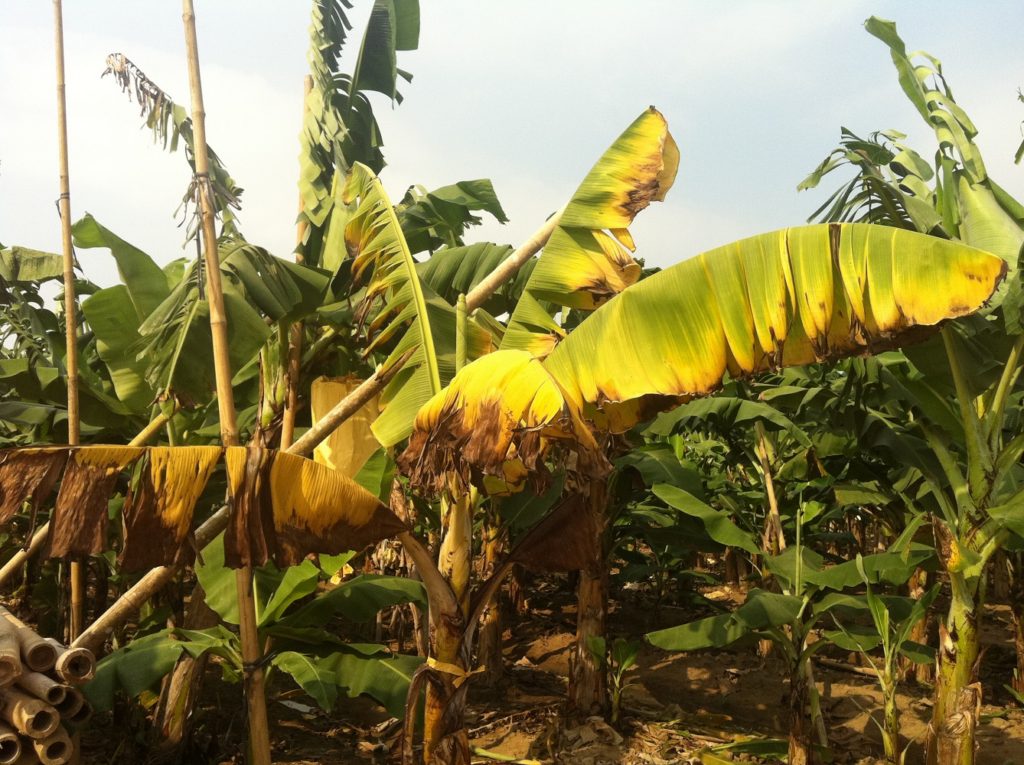 The Fusarium wilt epidemic in Middle America marked the rise of the Cavendish, the only cultivar that could be grown on soils infested with FOC. The fact that they are also the highest yielding banana cultivar quickly made Cavendish the most popular banana variety, both for export and for local consumption.

Currently, Fusarium wilt is once again the biggest threat to worldwide banana production. In the 1990s, a new race of Fusarium wilt – called Tropical Race 4 (TR4) – occurred in Cavendish plantations in Indonesia and Malaysia. Since then, TR4 has spread to the neighboring countries (Taiwan, the Philippines, China, and Australia), but also to distant locations such as Pakistan, Oman, Jordan, and Mozambique. 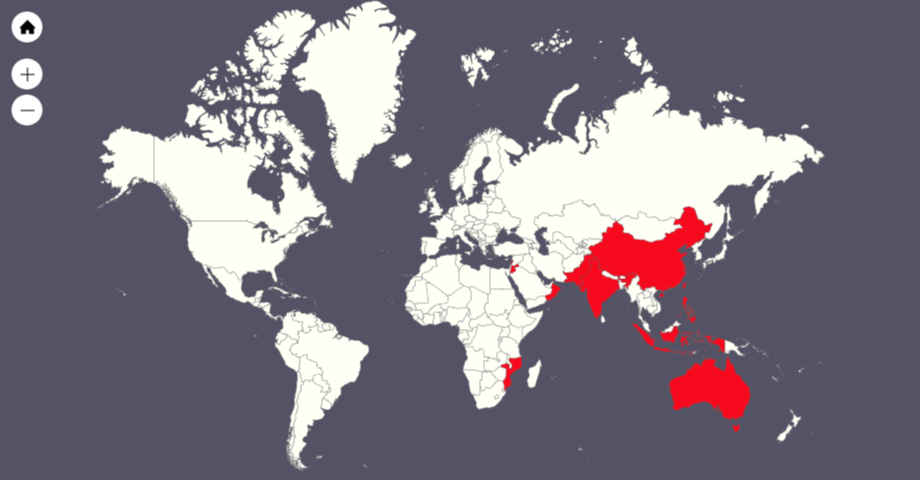 In Mozambique, the losses incurred by TR4 amounted to USD 7.5 million within just two years. Other countries suffer even more; TR4 causes annual economic losses of around USD 14 million in Malaysia, USD 121 million in Indonesia, and in Taiwan the annual losses amount to a whopping USD 253 million.

TR4 is not only diminishing harvests. It also raises the price of production, because producers have to implement expensive preventative measures and treatments of affected plantations. These preventive measures and treatments are part of the discussion at The World Banana Forum (WBF). The WBF is a permanent platform for all stakeholders of the banana supply chain, and is housed by the United Nation’s Food and Agricultural Organization (FAO). In December 2013, the WBF created a special taskforce to deal with the threat posed by TR4.

Despite its massive impact on banana production, we know very little about the pathogen that is causing Fusarium wilt disease. We don’t know how it spreads, why the new TR4 is so aggressive, or how we can stop it. 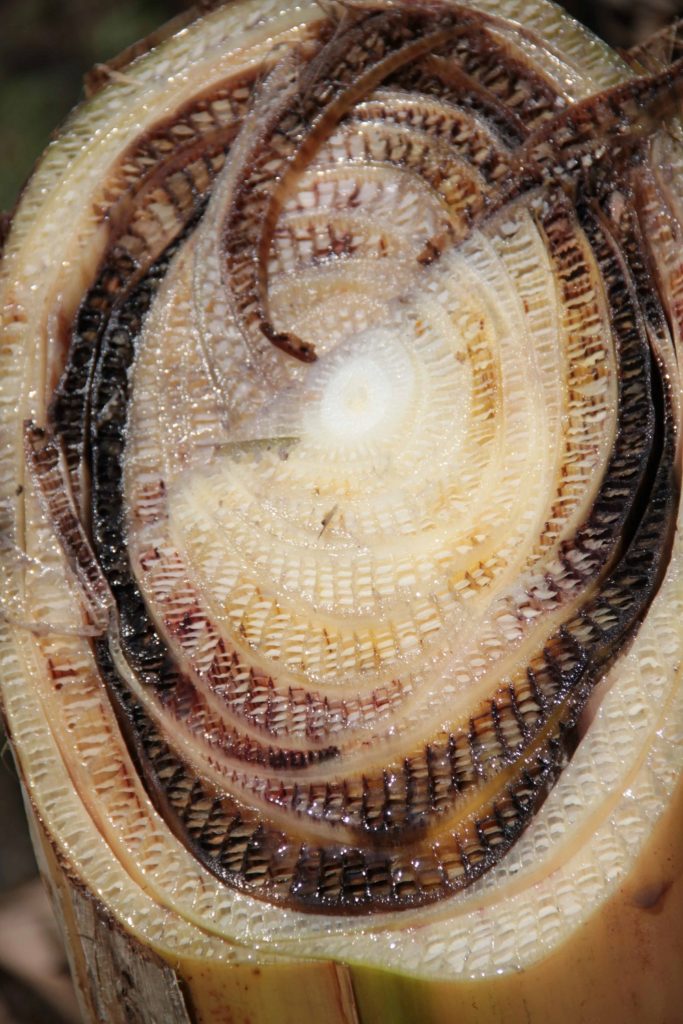 Breeding bananas is incredibly tedious, because edible cultivars are sterile and do not produce seeds. I am therefore exploring other ways to engineer resistance in banana against Fusarium wilt. As a scientist in the 2Blades group at The Sainsbury Laboratory, I am investigating how we can transfer resistance genes from other crop species into banana and, more recently, I have been investigating bacteria that are able to inhibit the growth and sporulation of F. oxysporum. These biologicals would be a fast and cost-effective way of preventing or even curing Fusarium wilt disease. 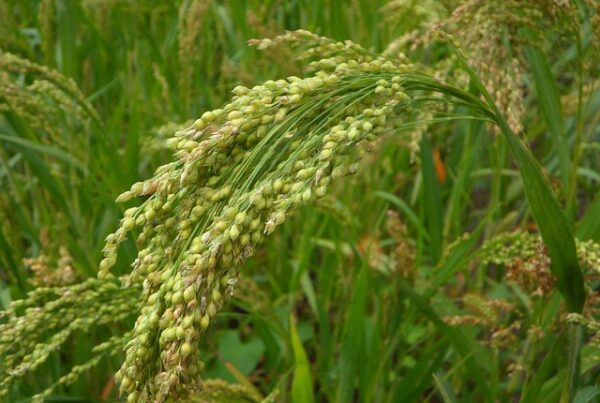 Deciphering the nutritive potential of linseed