For Africa to end chronic hunger, governments must invest in sustainable water supplies.

The fields are bare under the scorching sun and temperatures rise with every passing week. Any crops the extreme temperatures haven’t destroyed, the insect pests have, and for many farmers, there is nothing they can do. Now, news about hunger across Africa makes mass media headlines daily. 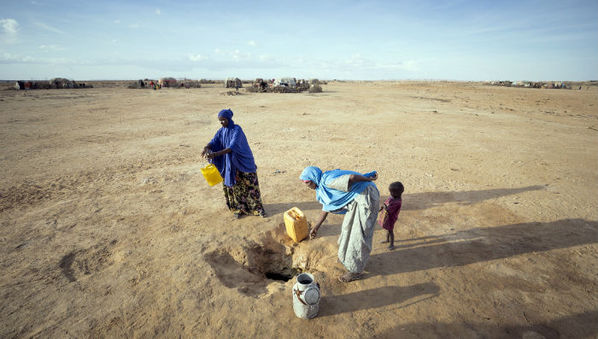 Globally, hunger levels are at their highest. In fact, according to the Famine Early Warning Systems Network, over 70 million people across 45 countries will require food emergency assistance in 2017, with Africa being home to three of the four countries deemed to face a critical risk of famine: Nigeria, South Sudan, Sudan and Yemen. African governments, non-governmental organisations (NGOs) and humanitarian relief agencies, including the United Nations World Food Programme, continue to launch short-term solutions such as food relief supplies to avert the situation. Kenya, for example, is handing cash transfers and food relief to its affected citizens. The UN World Food Programme is also distributing food to drought-stricken Somalia. And in Zambia, the government is employing every tool including its military to combat insect pest infestation.

But why are we here? What happened? Why is there such a large drought?

Many African smallholder farmers depend on rain-fed agriculture, and because last year’s rains were inadequate, many farmers never harvested any crops.

Indeed, failed rains across parts of the Horn of Africa have led to the current drought that is affecting Somalia, south-eastern Ethiopia and northern and eastern Kenya.

Then, even in the countries where adequate rains fell, many of the farmers had to farm on depleted soils, and consequently, the yields were lower. Degraded soils and dependence on rain-fed agriculture coupled with planting the wrong crop varieties are some of the fundamental problems that lead to poor harvests and then to hunger. Worsening the situation is the unpredictable climate. Given these fundamental and basic issues that fuel the hunger cycle in Africa, it naturally makes sense to tackle them.

It is not rocket science. Farming goes hand-in-hand with water. There can be no farming without it. While this seems easy to reason, there are few organisations working to make sure that African farmers and citizens have access to permanent water sources. Access to water sources all year round would ensure that farmers can farm year in and year out.

What African governments must do

African governments must, therefore, invest in ensuring that their citizens have access to water. Measures that can be implemented include drilling and rehabilitating boreholes, creating reservoirs and irrigation systems, constructing hand-pumps and implementing water harvesting schemes. Such measures would go a long way and ensure that countries continue to face the same problem both in the short and long term periods.

“If Africa wants to end the recurring droughts, hard decisions must be made.”

Of course it is understandable that it can be hard to choose long-term solutions such as ensuring that citizens have access to permanent water sources year round over investing in short-term solutions when there are people who need help now.

Acknowledging this dilemma, Mitiku Kassa, the Ethiopia’s commissioner for disaster risk management, is reported to have described how hard it was to direct even a fifth of his budget towards well drilling. But such decisions must be made. The Ethiopian government still made that tough decision and sunk hundreds of bore wells throughout the country.

There is a great need to ramp up water harvesting and conservation efforts across the African continent. African governments and other stakeholders need to increase investment in multiple water-storing techniques. Such techniques include rain and flood water harvesting and the construction of water storage ponds and dams. But there should be no need to reinvent the wheel.

Time to learn from others

African countries can learn from other countries. Countries in the developed world have sustained their agriculture efforts by either drilling water wells to ensure they have access to the water they need for farming or by investing in rain and flood water harvesting. In California, for example, there have been a rise in the number of wells being drilled by farmers who use well water for farming. In 2016 alone, farmers in the San Joaquin Valley dug about 2,500 wells, a number that was five times the annual average reported in the last 30 years.

Countries such as Bangladesh, China, India, Myanmar, Sri Lanka and Thailand have made progress and are working on pilot projects that capture, harvest and store flood water. Stored water is then available for use by communities when they need it the most. Harvesting and storing water and making it available for agriculture, especially during the dry seasons, will allow citizens and smallholder farmers to farm throughout the year. These would further improve the resilience of farmers to the unpredictability of climate change.

If Africa wants to end the recurring droughts, hard decisions must be made. By addressing the fundamental and basic issues of long-term availability of water for agriculture, African countries can once and for all end this never-ending cycle of hunger.

Esther Ngumbi is a postdoctoral researcher at the Department of Entomology and Plant Pathology at Auburn University in Alabama, United States. She serves as a 2015 Clinton Global University (CGI U) Mentor for Agriculture and is a 2015 New Voices Fellow at the Aspen Institute.

This piece was produced by SciDev.Net’s Sub-Saharan Africa English desk.