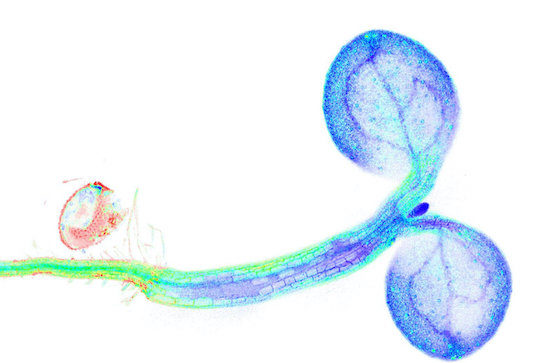 Researchers use a new method of in vivo biosensor technology

Almost all life on Earth, in particular our food and our health, depend on metabolism in plants. In order to understand how these metabolic processes function, researchers at the Institute of the Biology and Biotechnology of Plants at the University of Münster with the participation of the University of Bonn are studying key mechanisms in the regulation of energy metabolism. Now, for the first time, a new method of in vivo biosensor technology has enabled them to monitor in real time what effects environmental changes – for example, light, temperature, aridity, flooding or pest infestation – have on the central metabolism of the model plant Arabidopsis thaliana (thale cress). The study has appeared as an advance publication in the journal “The Plant Cell”.

The team of researchers expressed a genetically coded sensor inside the plants in order to make central metabolic process literally ‘visible’. “Because plants appear from the outside to be very static, they have to be superfast masters of flexibility and adaptation within their cells,” says Dr. Janina Steinbeck, lead author of the study. “We’re now able to observe those dynamics live in the living plant.” In order to measure the metabolic process in the plant and produce images of it, the researchers used in vivo biosensoring, a method for studying living organisms, tissue or cells in real time. The biosensor consists of a biological recognition element, a protein which specifically binds a molecule to be detected, and a read-out element, a protein which translates the binding to the recognition element into a light signal. The biosensor now being used was originally developed for use in nerve cells. The researchers refined this sensor and developed it so that it could be used in plants.

The sensor can directly bind and then release the molecules NAD+ and NADH. The so-called NAD redox system is of paramount importance for electron transfer during metabolism in almost all living things. The sensor consists of a fluorescent blue-green protein and a red one, both of which change their brightness depending on the NAD status in the cell. The sensor read-out in living cells is carried out with a modern confocal laser scanning microscope. The possibility of using NAD in vivo sensing in plants opens up new options for plant researchers. “For us, this new method is an achievement regarding the methodology because now we can gain a direct understanding of metabolic processes precisely where they occur in the plant,” explains Prof. Markus Schwarzländer, who heads the Plant Energy Biology working group at the University of Münster. “For example, it was a complete surprise for us to observe that such a key process as NAD metabolism changes so fundamentally during an immune reaction,” he adds.

Up to now, it had only been possible for the researchers to study this type of metabolic processes by obtaining extracts from the plants and analysing them with biochemical methods. In this approach, however, cells and tissue are destroyed, and it is no longer possible to trace where exactly the metabolic changes occurred. Now, the researchers can track dynamic changes in the redox metabolism – which, among other functions, serves to provide energy in the cells – from specific cell compartments, here in the cytosol, in the individual cells, up to complete organs in intact living plants. This approach makes it possible to create a first NAD redox map of the whole plant and to observe redox dynamics in transitions from light to dark as well as changes in the sugar status, cell respiration and oxygen supply. “As a result, it becomes apparent just how directly metabolism and environment are linked,” says Markus Schwarzländer. “What was especially exciting was the new connection to the immune response, which we previously had practically no idea about, and which now needs to be studied in more depth.”

At almost the same time as the publication in The Plant Cell, a study by researchers in Hong Kong was published in Nature Communications. In this study, a different sensor for NAD was expressed inside plants and used to study photosynthesis. The results of both studies support each other. “The information gained through the new method can play a key role in future in cultivating plants which make our food production more sustainable and contribute to alleviating the effects of climate change. A direct early recognition of stress in agricultural crops might also be possible,” says Schwarzländer, with a view to the future.