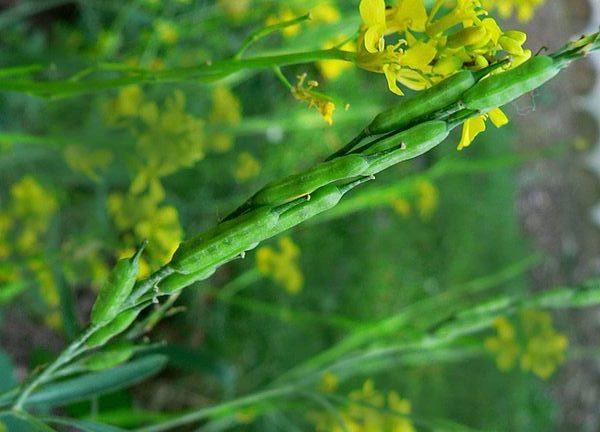 An international team led by the Plant Phenotyping and Imaging Research Centre (P2IRC) at the University of Saskatchewan (USask) and researchers at Agriculture and Agri-Food Canada (AAFC) has decoded the full genome for the black mustard plant—research that will advance breeding of oilseed mustard crops and provide a foundation for improved breeding of wheat, canola and lentils.

The team, co-led by P2IRC researchers Andrew Sharpe and Isobel Parkin, used a new genome sequencing technology (Nanopore) that results in very long “reads” of DNA and RNA sequences, providing information for crop breeding that was previously not available. The results are published today in Nature Plants.

“This work provides a new model for building other genome assemblies for crops such as wheat, canola and lentils. Essentially, it’s a recipe for generating a genome sequence that works for any crop,” said Sharpe, director of P2IRC.

“We now know that we can get the same quality of genomic data and level of information about genetic variation for these important national and international crops. This means we can make breeding more efficient because we can more easily select genes for specific desired traits.”

Sharpe said his team is already using this software platform in the Omics and Precision Agriculture Lab (OPAL) at the USask Global Institute for Food Security (GIFS) to sequence larger and more complex crop genomes.

Black mustard (Brassica nigra), commonly used in seed form as a cooking spice, is grown on the Indian sub-continent and is closely related to mustard and canola crops grown in Canada. The research provides a clearer, “higher resolution” view of the plant’s genes and gives researchers and breeders a more defined view of which genes are responsible for which traits.

The resulting gene assembly for black mustard also helps explain how the black mustard genome differs from those of its close crop relatives—such as cabbage, turnip and canola.

The team also uncovered the first direct evidence of functional centromeres, structures on chromosomes essential for plant fertility, and detected other previously hard to identify regions of the genome. This knowledge provides a foundation for improving crop production.

Parkin, a USask adjunct professor and P2IRC member, said the use of long-read sequence data has enabled unprecedented access to previously hidden features of plant genomes.

“This provides not only insights into how crops evolve but enables the identification of novel structural variation—now known to play an important role in the control of many key agronomic traits,” said Parkin, also the lead research scientist with AAFC Saskatoon Research Centre.

They also found in the sequence multiple copies of certain genes that express specific traits. This could mean that certain traits, such as fungal resistance, could be expressed more strongly through several genes.

Other USask members of the team include GIFS researcher Zahra-Katy Navabi and bioinformatics specialist Chu Shin Koh. Other team members include Sampath Perumal, a post-doctoral fellow with Parkin, as well as others from the University of Ottawa, Thompson River University, the National Research Council, and researchers from the United Kingdom and China.

“The genome assembly for black mustard that we have developed is a great example of how new Nanopore sequencing technology quickly reveals important genome biology,” Sharpe said, noting that this advanced sequencing technology and capability is available to public and private plant breeding organizations through the OPAL at GIFS.

The research is funded by the AAFC Canadian Crops Genomics Initiative and P2IRC, as well as a Mitacs Elevate post-doctoral fellowship.

The P2IRC program is a multidisciplinary digital agricultural research centre funded by the Canada First Research Excellence Fund and managed by GIFS. The goal of the centre is to discover, develop and deliver new tools and integrate them into software platforms to accelerate digital breeding. The result will be new crop varieties that are more resilient to biological and physical stresses such as disease, insects and drought, ensuring sustainable food production.