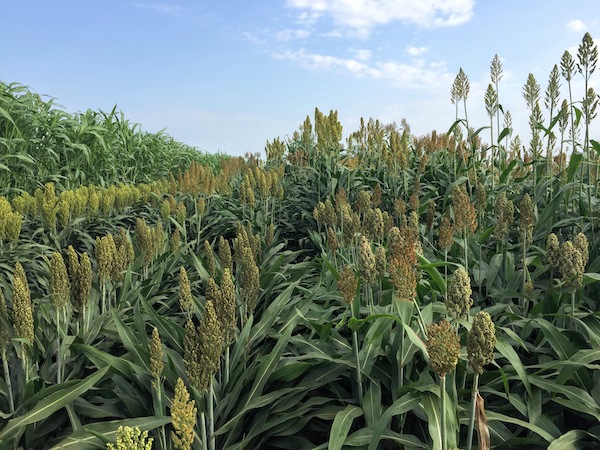 Under the hood: How environment and genomes interact in plant development

Iowa State University scientists have harnessed data analytics to look “under the hood” of the mechanisms that determine how genetics and changing environmental conditions interact during crucial developmental stages of plants.

A new study published in the academic scientific journal New Phytologist focuses on how changes in temperature affect the height of sorghum plants, and the scientists who conducted the experiments said the research could help to breed more resilient crops as well as shed light on mechanisms that play a critical role in plant growth. The research revolves around the concept of phenotypic plasticity, or how a given trait can differ as a result of environmental conditions. For instance, a plant may grow to a different height in a dry environment than a plant with identical genetics that grows in a wet environment.

Understanding plasticity can help plant breeders design crop varieties that will perform well under a range of environmental conditions, said Jianming Yu, a professor of agronomy and the Pioneer Distinguished Chair in Maize Breeding at Iowa State University and corresponding author of the study. But looking only at the final mature traits of plants paints an incomplete picture of plasticity. Instead, the new study examines the growth rate of sorghum during a critical stage of development, between 40 and 53 days after planting. Zeroing in on that rapid-growth phase in the plant’s life cycle allowed the researchers to examine the mechanisms that govern sorghum’s phenotypic plasticity in greater detail.

“Looking at the developmental phase allows us to look under the hood to see what causes the final mature traits,” Yu said.

The researchers collected data on sorghum, a globally cultivated cereal crop, grown in Iowa, Kansas and Puerto Rico over the span of multiple years. Measurements of plant height were taken at several points during the growing season, creating a large dataset on which the researchers applied statistical regression analyses to better understand the relationship between height and diurnal temperature change, or the difference in temperature between nighttime lows and daytime highs.

They found increases in diurnal temperature change tended to produce shorter plants. The trend was particularly distinct during that critical developmental phase around 40 to 53 days after planting.

“We found that these genes actually interact with environmental stimuli and control the maximum growth rate as well as time to reach maximum growth rate,” said Qi Mu, a postdoctoral research associate in agronomy and the first author of the study. “And that eventually determines the final plant height.”

Climate change increases the urgency of understanding phenotypic plasticity, Yu said. As climate change causes more volatile swings in weather, farmers and plant breeders will require better tools for predicting how crop varieties will perform under different environmental conditions. For instance, Yu said climate change could cause nighttime temperatures to rise in some locations, which would have significant ramifications for cultivating crops, as illustrated in the study.

Research into phenotypic plasticity will allow plant breeders to develop more precise tools for predicting how crops will perform across a range of environmental conditions, Mu said.

“With climate change, crops need to adapt to different climates and environments,” Mu said. “In order to breed crops that are more adaptive we have to understand the mechanism of how they respond to environments. With that knowledge, we can design resilient crops that thrive in future environments.”

“Thousands of weather and genetic fingerprint datapoints were mulled over as well,” said Li, now a research scientist for the U.S. Department of Agriculture’s Agricultural Research Service.

Funding for the research came from the USDA National Institute of Food and Agriculture, the ISU Raymond F. Baker Center for Plant Breeding and the ISU Plant Sciences Institute. The research team also included Tingting Guo, a research scientist in agronomy and a member of Yu’s lab.