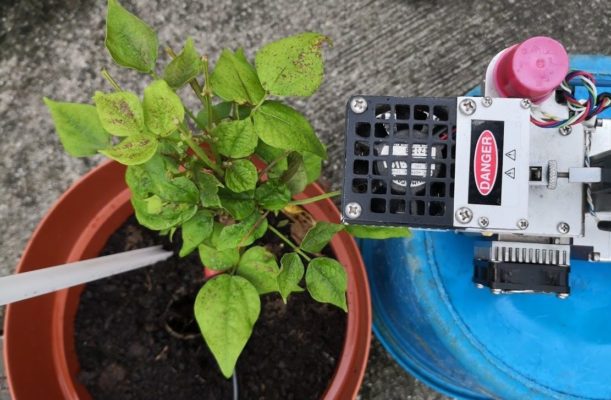 The harmful effect of ozone on plants

A research team led by Professor Amos Tai, Associate Professor of the Earth System Science Programme at The Chinese University of Hong Kong (CUHK), has successfully quantified and visualised the impact of Hong Kong air pollution especially ozone pollutant on plants and the environment. Although the experiment took place in a rural area and in Spring, which would usually have a lower average ozone concentration, the pollutant level still reached high enough to do significant damage to the bioindicator plant. The finding was recently published in Atmosphere.

Hong Kong is one of the most densely populated cities in the world, with millions of people living and working in close proximity to busy roads with severe air pollution. Among various air pollutants, surface ozone is of particular concern. According to the 2019 air quality monitoring results announced by the Environmental Protection Department, the average ozone level has been increasing over the past 20 years, despite the overall air quality and the other four major pollutants level being on an improving trend.

Ozone is mostly produced photochemically from anthropogenic precursor gases such as Volatile Organic Compounds (VOCs) and Nitrogen Oxides which are emitted by vehicles. Ozone can cause considerable harm to both human and ecosystem health. The phytotoxicity of ozone has been shown to damage photosynthesis, reduce gas exchange, induce early leaf senescence, and retard growth in both natural vegetation and crops. As plants play vital roles in regulating the ambient environment, ozone-induced damage in plants may further accelerate environmental degradation, with severe consequences for human health.

Professor Tai and his research team established a free-air experimental garden to monitor, quantify and understand the mechanisms of ozone damage on plants. In this experimental field, dubbed the “ozone garden”, the team grew cultivars of beans with different ozone sensitivities as a bioindicator of the local air pollution impacts on ecosystems.

Professor Tai is excited about establishing the “ozone garden”, “Such a free-air ozone garden has been built at many locations in the US and Europe but this is the first of its kind in South China. The data obtained from this garden is essential to demonstrating the impact of air pollution on plants under locally specific environmental conditions and to deriving important parameters of ecophysiology and biometeorology that can be used to build a regionally relevant earth system model for predictive purposes.”

The species of bean that is chosen shows a distinctive red mottles pattern on the leaves according to the level of ozone in the atmosphere. And there are two genotypes of beans, one sensitive type and one resistant type, that show different sensitivity to ozone. The beans are supplied by the Centre for Ecology and Hydrology, the United Kingdom. Dr. Felix Leung, project leader, found that the ozone-sensitive genotype bean suffers higher ozone-induced foliar damage, with more red mottles and a higher death rate. The sensitive genotype plants also produce 30% more flowers than the resistant genotypes. This is the result of stress-induced flowering caused by ozone, which triggers the plant to produce more flowers and therefore maintain its chance of fertilisation and reproduction. The team also found that the resistant genotype has a higher success rate (17% more) of fruiting development from flowering to bean formation and less immature or dead pods than the sensitive one.

The findings show that the ozone level in Hong Kong is high enough to cause significant damage to plants even in the countryside, like CUHK campus. It has important implications for farmers in Hong Kong and South China where their crops suffer from ozone pollution. This experiment also gives evidence to support a clean air policy that reduces vehicle emissions in Hong Kong. Continuing work on the experiment will be carried out to investigate the physiology of the beans under various ozone concentrations in a controlled environment.