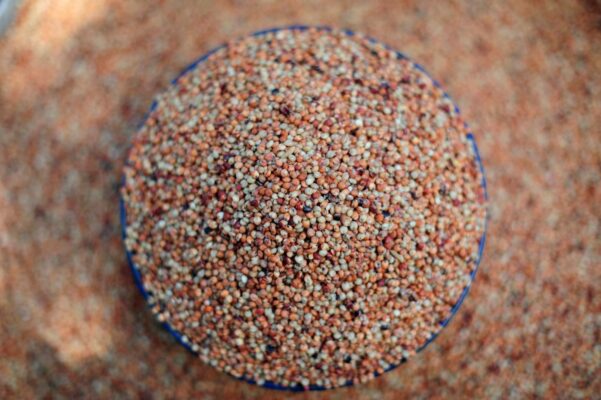 Researchers found wild relatives of sorghum in higher concentrations in Australia than anywhere else; the plants have potential to combat drought and extreme heat, but they need urgent safeguarding

New research published in the journal Diversity and Distributions used cutting-edge technology to show that wild cousins of sorghum, the fifth-most important cereal crop globally, are most concentrated in Australia, despite having been domesticated in Africa. But with 12 of the total 23 wild relative species possibly endangered, four vulnerable, and four near threatened, these economically important wild plants are in peril, the authors warn.

All crops, including sorghum, have wild relatives, just as wolves are wild relatives of domesticated dogs. From rocky slopes and sand dunes to grasslands and forests, wild sorghum species are hardy and resilient. Breeders can use these traits to develop new sorghum varieties that are better adapted to hotter and drier conditions while containing less cyanide – a toxic compound found in the leaves and stem which constrain the crop’s current use as animal feed.

As both a human and animal food crop, sorghum is grown on every inhabited continent; is more drought- and heat-tolerant than maize and can grow without fertilizer. In parts of Africa and Asia, it is a critically important crop for food and nutrition security. Most wild sorghum species are found in northern and western Australia and Queensland; one is found in the Americas, and five in Africa and Asia.

“First we needed to know as specifically as possible where the wild relatives live, which was not an easy task. The most widespread species extends 34,403,804 km2 from Japan to Pakistan; the least widespread extends 400 km2 across the remote Katherine Region in Australia,” said Harry Myrans, who conducted the research at Monash University in Australia.

“We were shocked to find that many wild species are currently not sufficiently safeguarded, in protected areas or natural habitats; nor in genebanks. Habitat destruction, invasive species, and climate change itself all threaten their existence,” said Myrans. “The emphasis now needs to be on creating conservation policies to protect the wild plants, and urgent seed collection activities to protect them in genebanks for the long-run.”

“This is why conservation and human survival are connected,” said Gleadow. “People forget that the reason Koala bears exist is because the trees they eat exist. If the COVID-19 pandemic has taught us anything, it’s that our human existence is closely linked with our environment. Preserving wild diversity related to crops is critical for our health.”

“We need to know what wild relatives we have left, where, and then conserve them urgently,” said Gleadow. “When they are in danger, we are in danger,” she said, adding that some populations are easy to find, for example, because they are near a road, but that unknown swathes of potentially important diversity for agriculture likely occur in remote areas and are unmapped and unprotected.

Cutting-edge technology was used to understand the distribution and conservation status of sorghum’s wild relatives. Maria Victoria Diaz, a co-author from the Alliance of Bioversity International and the International Center for Tropical Agriculture, said, “We used big data analytics to process millions of data points to predict the global distributions of these wild plants. This critical research has enabled us to process more data than ever before, and it will allow us to create a methodology to understand the distributions and conservation of other crops.”

The research group has previously investigated wild relatives of chile peppers, zucchini, carrots, potatoes, and sweet potatoes, highlighting gaps in our understanding of the conservation status of wild relatives.

“Humanity’s activities are destroying wild spaces at such rapid speed. We know that crop wild relatives are useful, but they are so underexplored. What is sure is that as they disappear, whatever unique and valuable uses they have to humans, to their environment and other species that live in it, disappear forever,” said Colin Khoury, a crop diversity expert at the Alliance.

“This work shows that despite previous explorations of wild relatives in Australia and beyond, more needs to be done. In this case, Australia is clearly a hotspot of diversity. If more attention were paid to protecting these plants in the country, this will pay off in combating climate and food security threats not only in Australia but in many other countries as well,” he said. “Protecting these wild plants is critical not just for Australia, but for the world.”

Read the paper: Diversity and Distributions